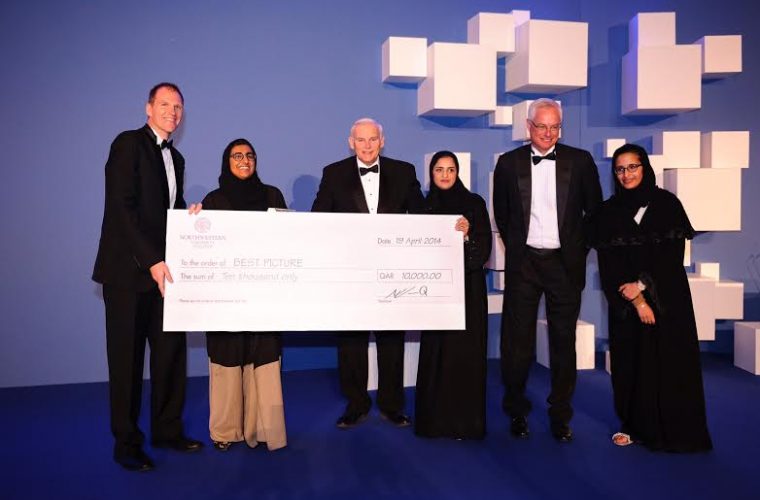 A heart-wrenching portrayal of the lives of carriers in Qatar’s souqs, Amal Al-Muftah’s Al-Hammali, was winner of the THIMUN Qatar Northwestern Film Festival’s award for Best Picture, taking home a check for 10,000 riyals.

The five-minute film featured Mahmoud Ghasemi, Gholam Ahmed, and Mohamed Abdolrahim, three Iranian men who arrived in Qatar as teenagers in the 60s, working as hotel porters and Kandaris (water carriers). Forty years later, they continue to carry a heavy load at work as well as in their every-day lives as expat laborers.

“We walk past the Hammali in Souq Waqif every day and barely see them, but through film I was able to help their voices reach people, particularly in Qatar,” said Al-Muftah, a student in her last week at Qatar Academy and who was recently accepted into Northwestern University in Qatar. “I have been able to feel the impact of the film I have made—people who have watched the film tell me that they go back to Souq Waqif to speak to these men and make donations.”

The award was presented by Everette E. Dennis, Dean and CEO of Northwestern University in Qatar, who commented: “Effective entertainment can make audiences smile or cry, but it certainly causes them to ponder. The nominees for this year’s festival awards communicated their subjects’ stories powerfully, and whether they won an award or not, they have all created an impact.”

The three-day annual festival was sponsored by Northwestern University in Qatar and THIMUN Qatar-a partnership program between Qatar Academy and The Hague International Model United Nations Foundation. The event was created to encourage high school students to use film as a tool to advocate for social change and development.

In its third international edition, the festival convened student directors from countries around the world to attend workshops and take part in skill-building exercises, including a 24-hour team challenge to develop the best short film in one day. The festival culminated in an Oscar-style gala awards ceremony, where judges from NU-Q, THIMUN and Qatar Academy announced winners across a number of categories based upon their critical review of the 15 films submitted.

Cameron Janzen, teacher at Qatar Academy and Head of THIMUN Qatar, stressed the importance of challenging students to explore themes of social and positive change.

“The purpose of the film festival is to communicate the high value that we place on the importance of young people telling stories. Stories about important issues of our day, stories that may not be normally told, stories that challenge us to look at our attitudes and behaviors, stories that encourage us to be positive agents for change. We are very proud of all of the young film makers who are already working for positive change.”

All nominated films from the 2014 THIMUN Qatar Northwestern Film Festival can be viewed on the THIMUN Qatar YouTube channel: THIMUNQatarFilmFest