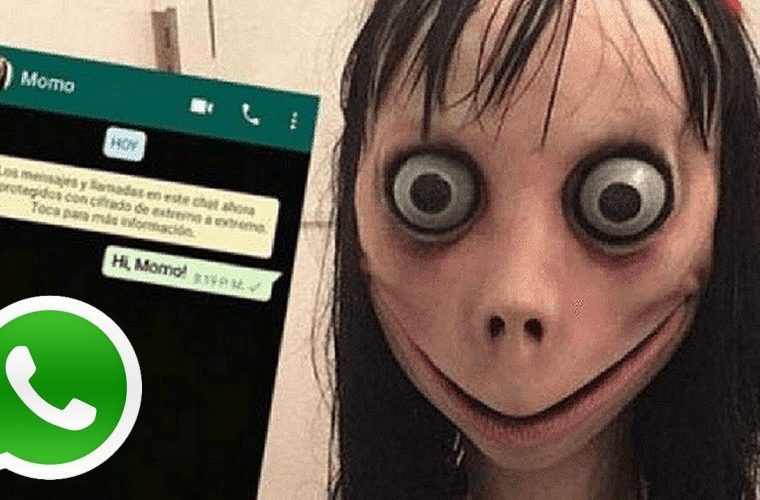 The recent years have witnessed a huge spike in social media usage among all walks of life and if there's one age bracket that's getting affected the most, it's without a doubt the youth—preferably those between 7 to 15 years.

Kids and teens have been encountering all sorts of viral 'challenges' that exhort them to engage in some form of suggested activity and usually post photographs or videos of the results online as proof. The motivations behind social media challenges can range from raising money for charities to simply encouraging others to take part in some fun and goofy behavior with over-the-top dance challenges topping the craze list.

One example of such acts is the so-called “Momo” challenge, which according to reports is a supposed-to-be variant of cyberbullying prevalent on platforms such as WhatsApp and YouTube.

The “Momo” messages dominating WhatsApp these past few days allegedly compel youngsters to engage in perilous activities such as taking pills, stabbing other people, and even killing themselves.

The online game, which targets children as young as 5-years-old, then threatens the player (in the form of blackmail) if they refuse to follow the game's 'orders'.

Let's get to know the face behind the name...

'Momo,' an unrelated sculpture of a grinning woman figure with dark hair, pale skin, and bulging eyes was said to be a brainchild of well-known Japanese special effects company 'Link Factory' which was once displayed at a Tokyo gallery.

The artist, Midori Hayashi, is not in any way associated with the game.

How dangerous is the "Momo" game?

The Momo challenge, which is believed to have originated in Mexico, hit the news in mid-2018 when a report was exposed saying that a 12-year-old Argentinian girl had been motivated by the game to hang herself from a tree in her family’s backyard near Buenos Aires.

A Facebook user who goes by the name of Amyre Shonny wrote:

“Parents please be aware and very cautious of what your child watches on YouTube and even YouTube Kids! There is a thing called “Momo” that’s instructing kids to kill themselves, turn stoves on while everyone is sleep and even threatening to kill the children if they tell their parents. It doesn’t come on instantly so it’s almost as if it waits for you to leave the room then comes on in mid show. It’s been seen on Peppa Pig, LOL DOLL, those surprise eggs, and a few others. There’s also videos of cartoons doing sexual things, violent things and they may look innocent enough at first glance but trust they aren’t!”

Fox News claims that Momo is “also linked to the theft of personal data, harassment, extortion, anxiety, depression, and insomnia”.

Recent "Momo" casualties around the world

A Momo-related case has been reported in the UK for the first time recently including a 9-year-old Filipino boy who died due to an alleged pill overdose after a "Japanese figure with googly eyes" instructed him to do such.

As well as the two deaths in Colombia last autumn, “the death of a teenager in India was also linked to the Momo challenge”, says The Sun.

Besides Asia and South America, the game has also reportedly reached the European continent (specifically France and Germany), and prompted several police forces to issue warnings to children and their parents about the challenges.

"Momo" is reminiscent of the 'Blue Whale' phenomenon, which was linked to at least 150 teenage deaths in Russia in 2017.

What is the Blue Whale challenge?

The Blue Whale challenge is a social network phenomenon dating from 2016 that is claimed to exist in several countries. It is a 'game' reportedly consisting of a series of tasks assigned to players by an anonymous "administrator" over a 50-day period, initially innocuous before introducing elements of self-harm and the final challenge requiring the player to commit suicide.

The game's origin is uncertain up to this day but the term initially sparked worldwide panic when a Russian teenager posted a selfie with the caption "nyabye" before committing suicide in November 2015. Until now, it is reported that nearly 150 people have killed themselves via this game.

Many people believe that the name 'Blue Whale' is a reference to beaching, where whales become stranded on beaches and die.

The effect of Blue Whale to the MENA region

On March 12, 2018, the parents of seven young Tunisians who claimed their children had killed themselves due to the game requested a ban on 'Blue Whale' from the Tunisian courts. A trial court issued an interim judgment prohibiting the game and another supposed similar one named "Miriam."

Meanwhile mid-last year, the Saudi General Commission for Audio-Visual Media banned 47 video games that had online components that were alleged to be part of the 'Blue Whale' game, following the suicides of two teenagers that had been involved.

Emine Karadag, a 13-year-old from Turkey, is the latest teenager to take her own life after playing the game. She killed herself with her father’s rifle in January this year. Her body was found surrounded by drawings of whales and a list of 25 “things to do before I die” linked to the so-called game.

The 50-day challenge has as well reached the likes of Bangladesh, Brazil, Bulgaria, China, Egypt, India, Iran, and Italy.

So has these deadly games ever reached Qatar?

At the moment, NO.

Fortunately, 'Blue Whale' has failed to scare parents in Qatar despite the worldwide panic that it has brought some few months ago but with the new "Momo" viral and on the loose, there's a big chance for Qatar to get affected by the game especially with the latest findings from Vodafone Qatar’s award-winning online safety programme AmanTECH projecting alarming figures.

Alarming figures that could lead up to the possibility

There is no doubt that Qatar is one of the most connected countries in the world and children are exposed to technology from a very young age.

That's why AmanTECH has been raising cyber-safety awareness in the Qatari community by delivering online safety workshops at primary schools since late 2017. At the end of each workshop, the pupils complete an electronic survey on their use of technology, games, videos and social media.

At the last 20 workshops, in which 1761 children were surveyed, the following results were found:

Apps that are as risky as "Momo" and "Blue Whale"

In relation to cyber safety among kids and the youth, here are some of the most dangerous apps that every parent should be aware of:

Always keep in mind that the truth is that nothing sent over the internet REALLY disappears. There are always ways to retrieve and capture those images.

New apps are constantly being created, so it’s important to monitor what your child downloads. Being aware of the online tricks predators use will help you know what to look for.

Remember, your child’s safety is more important than their privacy. As a parent, you aren’t being nosy by checking their cell phone on a regular basis; you are being responsible. Perhaps your family could establish family media rules, such as having to check with a parent before downloading a new app or game. Having a common charging area so you can easily check phones could also be a good system for your family.

Also, take the time to explain to them (at an age-appropriate level) why you are asking them questions and checking their phone and privacy settings. Many children do not realize just how much information they are putting out there and how dangerous it can be.

In a nutshell, parents should monitor all of the sites and apps their kids use, and also know the passwords. Moreover, parents shouldn’t be afraid to cut kids off from their technology if they witness cyberbullying or worse, a luring that could end in a child being victimized.

Are Momo-related suicides real or is it just a myth?

While some consider it to be a pure bot playing tricks with vulnerable kids, others think it’s a hoax designed to fish for sensitive data. Our verdict is—myth or not, "Momo" reinforces the need for parents to have regular, honest and open conversations about what their children are doing online and who they are talking to.

Have you read various reports online about the viral "Momo suicides" as well? If yes, do you believe that such scare can ever take place in Qatar? Let us know your thoughts by dropping a line in the comments and also, don't forget to like and share this article—it keeps us going!