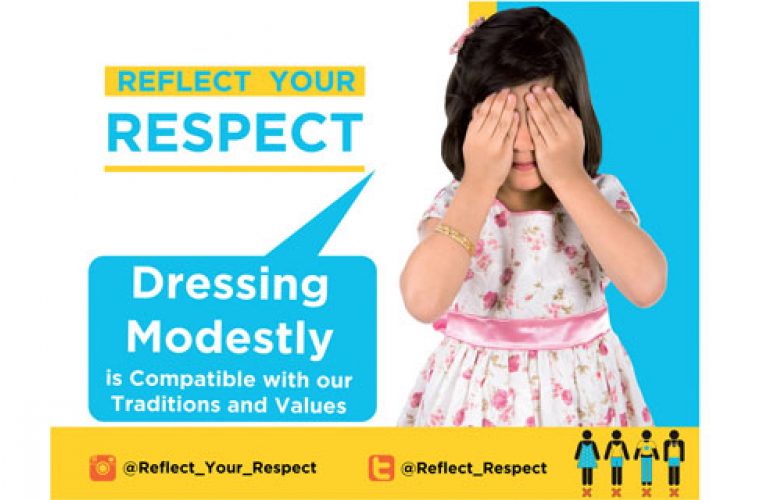 The debate about preserving Qatari culture in the face of a variety of cultures brought into the country by expatriates has come to the forefront once again with the recent re-launch of the social campaign, ‘Reflect your Respect’.

Many expatriates appreciate the campaign, as they go by the saying, ‘When in Rome, do as the Romans do,’ and invariably respect the traditions and laws of the country.

Some women say they have become very careful about their attire as they fear they may be accused of not dressing modestly.

According to the campaign, dressing modestly includes covering oneself from shoulders to knees and shunning leggings. But some expatriate women say they have been pulled up by other women and security guards at malls even when they believed they were dressed modestly.

The ‘Reflect your Respect’ campaign was first launched on social media last May as part of a drive that was previously called ‘One of Us’, when it began in 2012.

The campaign is no longer confined to social media. Last week, it was taken to malls and public places by Qatar Center for Voluntary Activities, Qatari Women Association and Dar Al Sharq.

Leaflets handed out as part of the campaign say: “If you are in Qatar, you are one of us. Help us preserve Qatar’s culture and values, please dress modestly in public places.” It urges people to cover themselves from shoulders to knees and avoid leggings.

The campaign refers to two laws in the country. Article 57 of Qatar’s constitution commits citizens, residents and visitors to maintaining public order, ethics and the nation’s traditions and norms. Articles 290 and 291 of Qatar’s penal code stipulate imprisonment and a fine for those who commit acts that violate morality in public places.

Qatari columnist Nagat Al Yafie recently called on everyone in the country to respect the local culture and traditions and abide by Qatar’s laws.

“Immodesty is an insult to the morality of the society and a violation of its traditions, and this has nothing to do with personal freedom. Such behaviour prevents a large number of conservative people from going to public places, so that they do not have to see the immodesty of others. Public places are not meant for just a specific group of people, but lack of respect for their feelings and traditions forces conservative people to stay at home lest their womenfolk and children see any disgraceful sights.

“This is why there should be a national campaign to give residents and visitors information about the importance of dressing modestly in public places and showing respect for the local culture,” she wrote in a column. Al Yafie suggested distributing booklets and brochures in several languages to inform expatriates and tourists visiting the country about Qatar’s traditions and culture, and also making the material available at tourist agencies and embassies.

In a Twitter survey by a commentator, only one percent (35 people) of the 3,437 respondents disagreed with Article 57 of Qatar’s constitution and Articles 290 and 291 of Qatar’s penal code. A total of 2,604 respondents agreed with these laws.

“The campaign had to be launched as many expatriates fail to show respect to our religion, culture and traditions, and we see enough samples in malls,” said a Qatari commentator on Twitter.

Another commentator asked: “Why do we need a campaign? Simply enforce the law”. In reply, a commentator said, “It’s better to educate people than punish. We have to communicate with expatriates as they influence us.”

A cross-section of expatriates this newspaper spoke to said that they respected the country’s traditions and culture, with some adding that the campaign had caused some concern.

“I dress respectfully at all times, but there should be better ways to engage people. I’m concerned that it will be a public shaming campaign,” said a Western expatriate.

An Arab expatriate working as a communications specialist said, “I think it’s a valid point, for all expatriates to dress modesty and respect the traditions of the country. But this campaign should be managed with respect for those with different religious beliefs and traditions than ours so that people feel that they have to do it out of respect, and not obligation.”

A young Filipina professional said she once went to a popular mall wearing a half-sleeved blouse and a skirt reaching below her knees.

“As soon as I entered the mall, a lady started shouting at me. She said I was not supposed to wear the clothes I was wearing. She also shouted at the security guard for letting me inside the mall. I felt insulted and embarrassed. I soon went into a store to buy a longer skirt and changed,” she said.

“We respect the culture here, and I don’t wear sleeveless or short clothes. The campaign asks us to cover ourselves from shoulders to knees. But some people have taken authority into their hands with the campaign. Now I’m very cautious about what I wear.

“I felt I was victimised because I’m an Asian,” she added.

In another incident, a Filipina was asked by a colleague to avoid wearing lipstick.

“I can see many women wearing make-up and lipstick, but I was told to avoid it. I think there should be very clear guidelines on what is accepted, or it would become difficult for expatriates.”

An Indian woman has posted a picture of herself on Facebook, wearing a short-sleeved, loose-fitting, below-knee-length dress, and said that a security guard stopped her from entering a mall because of her clothes. She has also posted a photo of a woman in another mall wearing much more revealing clothes and asked why people were treated differently.

A Lebanese woman working in a hotel said that she had become more careful about what she wore to work or in public places.

“I take extra effort in choosing my clothes. I’m not against the culture and traditions here, but I would rather not have someone approaching me and saying that my dress is not modest,” she said.

Some long-time residents worry that their traditions might be seen as immodest here.

“My concern is that my kids will not be able to live in a country that is free, where people are judged not by what they wear but by how they behave,” said a mother of two teenaged daughters.

“Most expats do respect the culture of Qatar. It is only a few who may be new to the region who do not do so. I hope this campaign doesn’t affect all of us. I fear if wearing a saree will be accepted here now, although we have been wearing it for many years in Doha,” said an Indian working mother.

Some Western expatriates, however, agree with the campaign.

An American mother of a young daughter said, “As a Western woman who has lived here for six years, I have found that I am much more comfortable in public wearing modest clothes. It prevents harassment and prevents stares. I get angry when I see expats dressed scantily and showing a lot of skin. I don’t know why I’m frustrated by that. I have always thought the airport should have signs at passport control explaining the advised dress. Some Westerners are simply ignorant.”

A Spanish professional said, “When you are in Rome, do as the Romans do. I am usually careful not to dress inappropriately when I am going to public places. I’m conscious of the culture and customs of the country.”

Some others said the campaign had been re-launched with a different approach.

“It’s definitely trying to be very sensitive to the expatriates in its re-launch. They approach people with flowers and candies; it’s a polite way. Yet there are some people who are not comfortable with the campaign,” said a British male expatriate working in public relations.

A Nigerian mother with teenaged sons said, “The re-launch of the campaign is not a bad idea because nowadays scandalous outfits are making it to the streets and other public places in Doha. Such dresses, which reveal too much flesh and curves, are not appropriate for Qatar’s climate. As a woman I feel very uncomfortable when I see a female dressing indecently.”