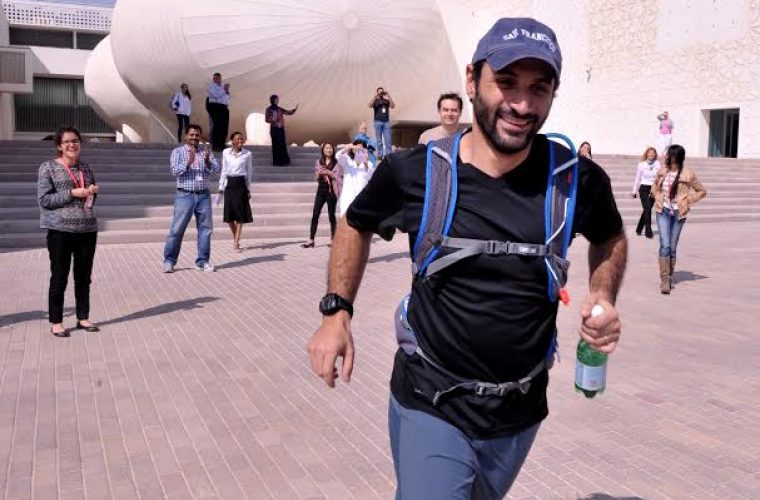 A researcher from Weill Cornell Medical College in Qatar (WCMC-Q) has completed an epic 360km ultra-marathon around Qatar to raise awareness of women’s cancer issues.

Setting off from the WCMC-Q campus at Education City, Dr. Tabrizi headed north on the Al Shamal Road as far as Al Ghuwayriyah, before turning southwest to reach Zekreet on the west coast. He then ran south to within approximately 30km of the border with Saudi Arabia before heading northeast towards Doha on Salwa Road, eventually arriving at the Corniche four days later to a hero’s welcome from friends and family.

Dr. Tabrizi, who specializes in research into ovarian and breast cancer and runs the Stem Cell and Microenvironment Laboratory at WCMC-Q, explained his motivation for undertaking the challenge.

“The main reason I wanted to run is that there is a real taboo in the Middle East around cancer,” he said. “People who fear they have the disease can be very reluctant to seek treatment because of this taboo and I think that can change if people know more about cancer.

“There is a widespread belief that if you are diagnosed with cancer then it will definitely be fatal, but this is not correct at all. Because of this fear, patients in the Middle East often present with cancers that are well advanced because they don’t go to the doctor when they first realize something is wrong.

“I want people to understand that in many cases cancer can be treated – for example, breast cancer can very often be cured with an operation and radiotherapy if action is taken at the appropriate time. So my message is that if you think there is something wrong, don’t be afraid to go to see your doctor straight away to get it checked.”

He added: “I think this is particularly important for women because in the Middle East they play such a key role in society as the center of the household. So the wellbeing of the family is often very dependent on the health of the mother.”

The grueling challenge was run alone by Dr. Tabrizi, with his wife driving a support vehicle carrying food, equipment and supplies. Dr. Tabrizi organized the run independently and has named it the Qatar Ultra Running Event (QURE).

In 2012, Dr. Tabrizi completed the 119km Ultra-Trail Mont du Blanc race that follows a mountainous route through France, Italy and Switzerland, but he said the run around Qatar was a very different experience.

“Running in the desert is all about the mental challenge,” he said. “Of course, it appears to be easier because you don’t have to worry about running up and down hills but in fact I found it just as challenging. The landscape is very featureless so you feel you are not making progress and then you are in a mental battle to just keep going.”

The researcher said that the endurance required for the long-distance run made it an appropriate challenge to raise awareness of cancer issues.

He said: “The difficult, long fight of the patients against the disease, with many ups and downs along the way, is similar to the emotions you feel as you are running for a long period of time. There are also parallels between the run and the long path of research we have to follow as we try to find new treatments for cancer and move to a knowledge-based society. All of these require patience and a strong will, but with perseverance we have hope that we might eventually succeed.”

Dr. Tabrizi, who also works as a gynecologic oncologist at Hamad Medical Corporation (HMC), started running at between 3 and 4am each day, at which time the temperature in the desert was about 5°C, rising to 24-25°C in the middle of the day. He said: “The heat was not too bad but I was still drinking about one liter of water every hour during the hottest part of the day. In fact, the wind was very violent and that was more difficult to deal with than the sun.”

Dr. Tabrizi stopped to set up camp each evening between 6 and 8pm. Along the way he found a stray saluki dog, which he rescued and now has at home while he searches for someone to adopt it.

He added: “It was a tough experience but I hope it will have a positive effect in terms of raising awareness of women’s cancer issues and our research. The support for research in Qatar has been very strong and we are carrying out some very valuable studies at WCMC-Q - I hope we will be able to continue on this track.”

WCMC-Q was inaugurated in 2002 as a branch campus of Cornell University in the United States. The college’s research facility was established in 2008 and now has 34 active laboratories conducting biomedical research at the basic, translational and community levels, with particular focus on the most pressing health needs in Qatar and the region.

Dr. Khaled Machaca, Associate Dean for Research at WCMC-Q, said: “It is rare to encounter a colleague as accomplished and multitalented as Arash. He is a talented researcher, dedicated surgeon and an ultra-runner to boot. Before Arash set off, I asked him what his motivation for such a difficult challenge was. His answer was simple: to promote awareness for biomedical research and women’s cancer issues.

“Arash joined the Research Department at WCMC-Q more than five years ago as one of our first recruits. At that time our research program was non-existent and many considered his decision to join us as bold as his idea to take on this incredible 360km ultra-run. As always, he has proven his skeptics wrong as he has completed the ultra-run and his research has flourished. Arash’s lab has completed exciting research in the areas of cancer and stem cells and has been extremely productive, with many publications. In addition, he has cared for many patients with gynecologic cancers. This required a sheer determination to succeed no matter what it takes. In that regard, Arash represents the vision and determination of the research program at WCMC-Q.”