Has wealth made Qatar happy?

Oil and gas have made Qatar the richest country in the world - rich enough to be ready, apparently, to spend $200bn (£120bn) on stadiums and infrastructure for the 2022 World Cup. But has virtually limitless wealth brought the country happiness?

It's still cool enough to sit outside in Qatar's capital, Doha. In another few weeks it will be too hot and most people - those who don't have to work outside - will be retreating indoors to the comfort of air-conditioning.

For now, though, families relax in the afternoon sun on the waterfront Corniche. The view has changed beyond recognition in the last few years. Glass and steel towers rise like an artificial forest from what was once a shoreline of flat sand.

"We have become urban," says Dr Kaltham Al Ghanim, a sociology professor at Qatar University. "Our social and economic life has changed - families have become separated, consumption culture has taken over."

Qatar's government puts a positive spin on the pace of change.

From desperate poverty less than a century ago, this, after all, has become the richest nation in the world, with an average per-capita income topping $100,000 (£60,000).

What's less well understood is the impact of such rapid change on Qatari society itself.

You can feel the pressure in Doha. The city is a building site, with whole districts either under construction or being demolished for redevelopment. Constantly snarled traffic adds hours to the working week, fuelling stress and impatience. 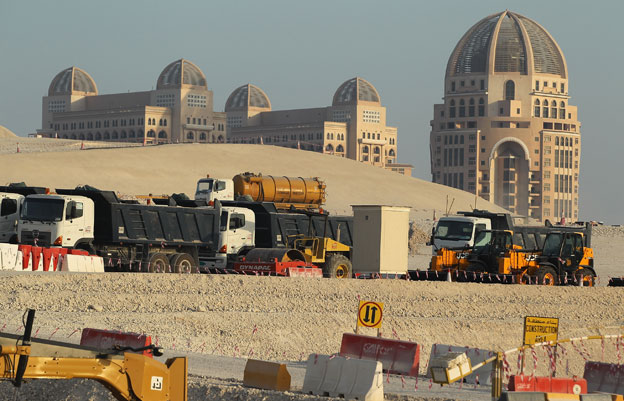 Local media report that 40% of Qatari marriages now end in divorce. More than two-thirds of Qataris, adults and children, are obese.

Qataris benefit from free education, free healthcare, job guarantees, grants for housing, even free water and electricity, but abundance has created its own problems.

"It's bewildering for students to graduate and be faced with 20 job offers," one academic at an American university campus in Qatar tells me. "People feel an overwhelming pressure to make the right decision."

In a society where Qataris are outnumbered roughly seven-to-one by expatriates, long-term residents speak of a growing frustration among graduates that they are being fobbed off with sinecures while the most satisfying jobs go to foreigners.

The sense is deepening that, in the rush for development, something important has been lost.

Qatari family life is atomising. With children almost universally being raised by nannies brought in from the Philippines, Nepal or Indonesia, gaps of culture and outlook are opening up between the generations.

Umm Khalaf, a woman in her 60s, her features hidden behind a traditional batoola face-mask, described to me the "beautiful simplicity" of life in her youth.

"We were self-resourceful once. It's painful to lose that family intimacy," she says.

Out on the dusty plains west of Doha, at Umm Al Afai - roughly, the Place of Snakes - farmer Ali al-Jehani is treating me to a tin bowl of warm, foamy camel's milk, fresh from the udder.

"Before you could be rich if you worked and not if you didn't - it was much better," he says, swiping a soft, sweet date through the milky froth and chewing thoughtfully. "The government is trying to help, but things are moving too fast."

Others echo his sense of politicians being out of step with people, particularly with regard to the strenuous - and allegedly corrupt - effort made to bring the 2022 football World Cup to Qatar, and the unanticipated level of media scrutiny that has come with the turmoil of construction.

Mariam Dahrouj, a journalism graduate, adjusts her niqab while speaking of a sense of threat.

"People in Qatar are afraid," she says. "Suddenly all the world wants to see us. We are a closed community, and they want to come and bring their differences. How can we express our values?" 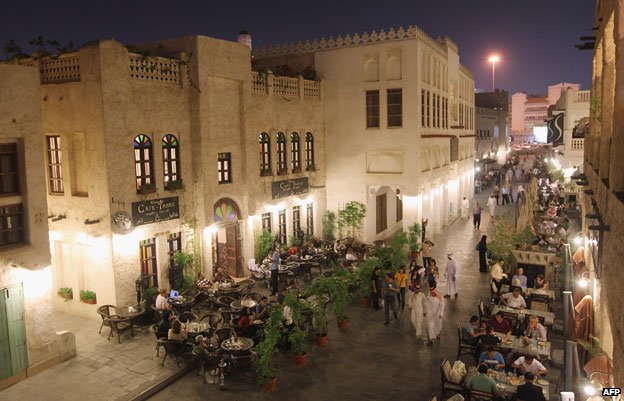 Qatari society is defined by class, which is often linked to race. It is desperately unequal.

Redress the balance - by, for instance, abolishing the kafala system that condemns migrant workers to near-slavery, or by opening Qatari citizenship to expatriates - and the fear is stability will erode and cultural values be undermined.

But stability is already a shrinking asset here, and values are already shifting.

As once-solid regional alliances with Saudi Arabia and other neighbours crumble, and corrosive apprehension spreads among Qataris about the impact of the World Cup - still eight years away - the government may yet find itself facing pressure to reform.

"I didn't know about all this kafala stuff," one young Qatari woman told me. "And I'm feeling: why didn't we fix it before?"

Behind the Corniche, coffee-drinkers and waterpipe-smokers enjoy the cool evening in the Souk Waqif market - a replica, since the original was torn down a decade ago and rebuilt to look old.

It's the only souk I know where men go round with dustpans and brushes. Cleanliness is another Doha obsession.

"Have some sympathy for Qataris," says an American anthropologist, who has spent years in Doha. "They've lost almost everything that matters."