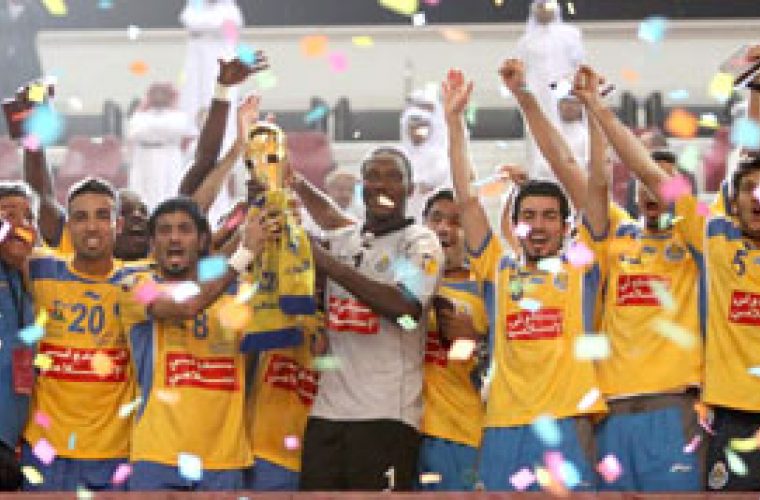 A brace from Brazilian Clemerson led 10-man Al Gharafa to a famous double with a 2-1 victory over arch rivals Al Rayyan in the Emir’s Cup final at the Khalifa International Stadium last night. Clemerson put the league champions into half time lead. And just as it seemed Amara Diane’s equaliser for Al Rayyan would force the match into extra time, the Brazilian struck a stunning goal in the last minute to give Al Gharafa their sixth Emir Cup title. The chief guest of the occasion, HH the Emir Sheikh Hamad bin Khalifa al-Thani presented the trophy to the winning team’s captain Saad al-Shammari after the final amid the rapturous reception from their yellow and blue-clad supporters at the stadium. Both teams had their chance to open the scoring in the fourth minute, with Imad El Hosni letting Al Rayyan down and Clemerson being the culprit of Al Gharafa at the other end. Ivory Coast attacker Diane, making one of his trade-mark runs on the right flank, sent in a teasing cross into the box but his Omani striker partner, al-Hosni, failed to connect it. Moments later, after being put through by Anas Mubarak, Clemerson had a goal at his mercy. But the Brazilian’s left footer was wide off target with Al Rayyan goalkeeper Saoud Abdulla al-Hajri stranded. But two minutes later, Clemerson made amends for that miss as he fired Al Gharafa 1-0 up with a neat finish. Othman El Assas’s clever lob sent Clemerson clear inside the box and the Brazilian calmly slotted his left-footed shot into the net. In the 21st minute, Al Rayyan had a chance to level the game when al-Hosni was hacked down on the edge of the area. Majdi Siddiq did well to curl the resulting freekick but the former Al Rayyan custodian Burhan was equal to the task as he tipped it away, diving to his left. As half time approached, Al Rayyan still showed a marked lack of ambition, failing to make any real inroads to the opposition territory as Al Gharafa were happy to defend as they took their lead into half time. Coach Paulo Autuori made a couple of changes at the break, bringing in Adel Lami in place of ineffective Brazilian Elton Gomes, who joined Al Rayyan on short loan, and replaced Abdulrahman Musabeh with Saoud Khamis. Lami immediately had an opportunity in the 51st minute but the Qatar international’s effort from close was denied by Qasim Burhan under Al Gharafa goal. As Al Rayyan pressed hard for an equaliser, Al Gharafa remained calm as they banked on counter attacks. In the 54th minute, Al Gharafa had a glorious opportunity to make a counter punch but Clemerson was denied by a brilliant save from al-Hajri. Four minutes on, Ivory Coast striker Diane, despite being closed marked, found enough space to thump a shot on Mohammed Mohamadi’s cross to force another good save from Burhan. Al Gharafa were reduced to 10 men when defender George Kussi was sent off for his second bookable offence as he brought down Diane in the 64th minute. Diane continued to cause trouble Al Gharafa defence with his wizardry and he made their numerical advantage count by scoring an equaliser in the 77th minute. Hassan Mudhafer, whipped in a low cross from the left, and Diane beat Burhan with a diving header to tie the score 1-1 to a big roar from Al Rayyan fans. Amid frequent exchanges of attacks, Al Gharafa earned a penalty after Italian referee Roberto Rosetti spotted Al Gharafa defender handling the ball inside his six-yard box. But Iraqi striker Younus Mahmoud spooned his spotkick to the relief of Al Rayyan camp. Extra time loomed large after Al Rayyan’s Brazilian defender Eder Guterras made a good spade work to clear Mohammed Ismail’s shot from the line. But with a few seconds to go, showing his predatory skills, Clemerson slotted home after collecting a pass from Fahid al-Shammari to complete the double. http://gulf-times.com/site/topics/article.asp?cu_no=2&item_no=291173&version=1&template_id=49&parent_id=29