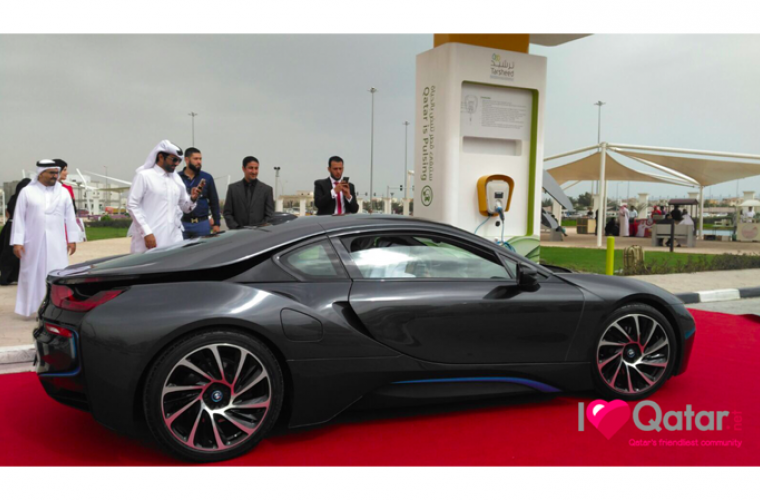 Tarsheed, the National Program for Conservation and Energy Efficiency launched by Qatar General Electricity & Water Corporation (KAHRAMAA), announced the official inauguration of the “Electric Car Charging Stations Project – Phase 1” as part of the ‘Green Car Initiative’ in Qatar. The inauguration came during a press conference held yesterday at the KAHRAMAA Awareness Park (KAP) in the presence of KAHRAMAA’s President.

Commenting on the launch, His Excellency Eng. Essa bin Hilal Al Kuwari, President, Qatar General Electricity & Water Corporation KAHRAMAA said: “Last May, the Ministry of Energy and Industry, Ministry of Transport and Communications, and KAHRAMAA signed the ‘Green Car Initiative’. The agreement stemmed from the country’s understanding of the importance of providing future generations with a clean, healthy, and safe environment and comes as part of Tarsheed’s objective to reduce CO2 emissions in Qatar by (7%) from the total targeted percentage of all sectors (17%) by 2022, in line with the National Development Strategy II.” He continued, “When we launched Tarsheed, almost six years ago, our goal was to create a culture of conservation and encourage the preservation of our country’s resources, for ourselves and for the next generations.”

“Our project today is an example for our short-term plans to raise awareness and develop the right infrastructure for green cars in Qatar. It is part of a long-term strategic plan set by our wise leadership to develop regulations and policies and to build the necessary infrastructure to ensure the success and sustainability of the green cars,” Concluded Al Kuwari.

Phase 1 of this project is a collaboration with Tarsheed, Siemens Qatar, and Alfardan Group, where the Alfardan Real Estate Group will be providing three electric car charging stations at some of its most prominent properties. On this occasion, Mr. Omar Hussain Alfardan, President & CEO, Alfardan Group, said: “Under the strategic leadership of the Emir of Qatar, His Highness Sheikh Tamim Bin Hamad Al Thani, to steer the country’s prosperous future towards the fulfillment of Qatar National Vision 2030, Alfardan Group remains steadfast in its commitment to uphold the initiatives of Qatar’s Government, particularly the Qatar National Program for Conservation and Energy Efficiency project, which works towards creating a more environmentally-sustainable environment. Through this partnership, we confirm our full cooperation with KAHRAMAA and Siemens Qatar in delivering clean technologies to the country for a successful implementation of the electric car stations project”.

Siemens Qatar oversees the technical aspect of Phase 1 of this project, and on this occasion Mr. Adrian Wood, CEO, Siemens Qatar said, “We are proud to be providing the technology for the first-ever electric car charging stations in Qatar and supporting the development of efficient and sustainable city infrastructure.” He added, “Globally we use innovation and technology to build modern, digitalized and highly sustainable cities, and our partnership with Tarsheed is a key step forward in Qatar’s transition to a greener future.”

A number of partners from different sectors of in the country are expected to come together to help provide electric and hybrid cars, establish the proper infrastructure needed, and raise awareness and encourage the public to use these cars.

An exhibition displaying different electric and hybrid cars was held on the sideline of the press conference at the KAHRAMAA Awareness Park. The exhibition will continue for the next three days and is open from 9am to 1pm. Among the exhibitors were some of the most prominent car dealers in the country: Abdullah Abdulghani & Bros, Saleh Al Hamad Al Mana Co, and Nasser bin Khaled Automobiles, in addition to Alfardan Automobiles.

Qatar has recently participated at the 23rd annual Conference of the Parties COP23 to the UN Convention Change (UNFCCC) in Bonn to renew its commitment to translating the outcomes of the Paris Climate Agreement into concrete steps and successful projects towards reducing the impact of global warming and achieving sustainable development, as well as Qatar National Vision 2030.