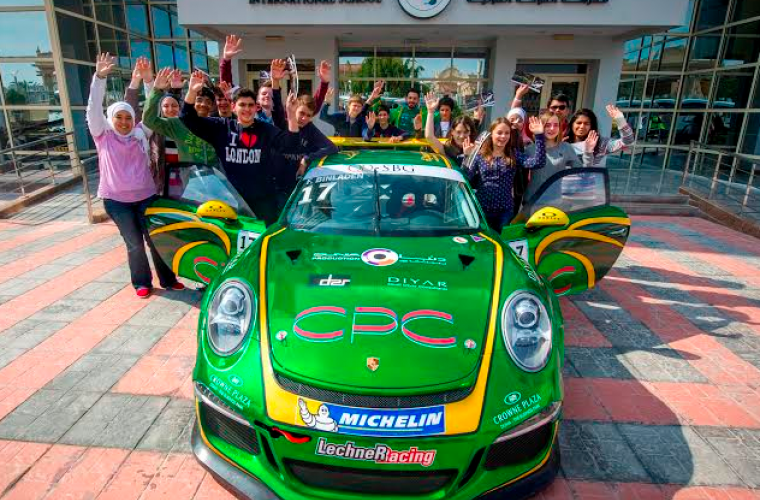 -Proud supporter QD-SBG brings Saudi Falcons driver Faisal Binladen to ACS Doha International School -Porsche GT3 Cup Challenge Middle East kicks into gear 17-18 January at Losail International Circuit Pupils from ACS Doha International School were amongst the first to get a sneak-peek into the upcoming action of the Porsche GT3 Cup Challenge Middle East when team Saudi Falcons driver, Faisal Binladen, visited the school today. Almost 100 students heard from last season’s Silver Michelin category winner on his racing experiences and were treated to a look under the bonnet of the stunning new Porsche GT3 Cup, the car which features in the one-make series. Five lucky students also won the chance to take a pit tour with the Saudi Falcons team at Losail International Circuit over the race weekend. Speaking ahead of the Porsche GT3 Cup Challenge Middle East, which takes place 17-18 January at Losail International Circuit, Faisal Binladen said: “It has been great to be able to get out into the local community today and share the excitement of my sport with young people in Doha. A key element in the creation of the Porsche GT3 Cup Challenge Middle East was to identify, and provide opportunities for, young racing talent from the region and I hope that today we have shown what our sport has to offer. I look forward to seeing many of those faces at Losail International Circuit this weekend!” The Doha rounds of the Porsche Cup Challenge Middle East are proudly supported by QD-SBG. The action gets underway from 4.00pm on January 17 with practice and qualifying taking place before the 12-lap race at 8.45pm. Created to inspire and identify top Arab and local-based talent, the Porsche GT3 CCME enters its fifth season as the most competitive and professional racing series in the region. The 12-round series features leading drivers from the Middle East and Europe, all competing in identical new Porsche 911 GT3 Cup cars on world-class circuits in the United Arab Emirates, Bahrain and Qatar. Since the launch in 2009, adrenaline fuelled rivalries have been forged, as proven drivers battle against up and coming talents for individual classifications and team honours. For further information, visit www.gt3me.com - ILQ News -