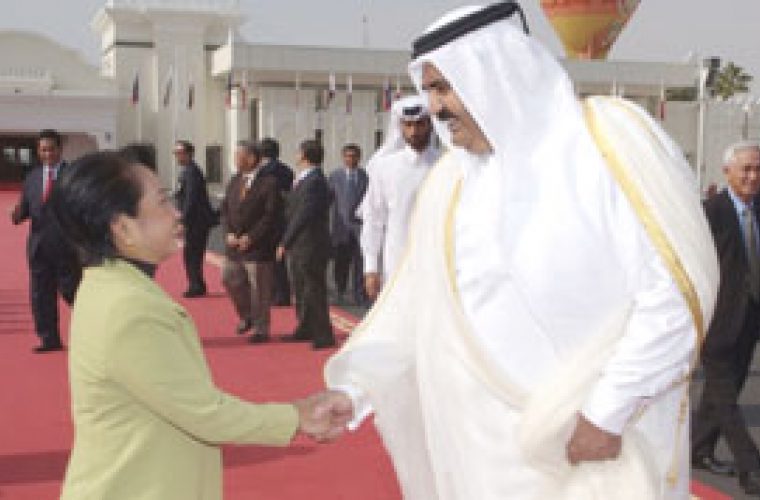 DOHA has asked Manila for more time to study the situation in the conflict-hit Mindanao region after Philippine President Gloria Arroyo made a formal request to Qatar to act as a “facilitator of the peace process”, a top Filipino official told Gulf Times yesterday. Before departing for Manila at the end of a two-day official visit, Philippine Secretary of Trade and Industry Peter Favila said that Arroyo presented the request in her meeting with HH the Emir Sheikh Hamad bin Khalifa al-Thani, and now “they need to have a more complete briefing of the situation.” Qatar’s support is actively being sought as a facilitator between Manila and the Moro Islamic Liberation Front (MILF), after Doha’s successful mediation efforts in Lebanon earlier this year. “I think it’s pretty difficult for Qatar to make any comments at this point until the Philippines government gives them a detailed briefing of the situation back home,” Favila said. Earlier, Arroyo’s peace adviser Secretary Hemogenes Esperon Jr had told Gulf Times that Qatar could either act as a facilitator or assist Manila with development and infrastructure building in the Muslim-majority region. On December 1, Arroyo reconstituted the government panel in the suspended peace talks with the MILF which was followed by a “complete reconstitution”. The decision came after Malaysia pulled out of the International Monitoring Team at the end of last month citing “developments within its own territories”, as well as the rising perception that the current methods of bringing lasting peace were not working. The official termed Arroyo’s visit as “very very successful” and “highly productive”. “There were investment commitments, some agreements were signed and a decision to set up a joint sovereign wealth fund (SWF) to the tune of $1bn,” Favila said. Qatar, through the Qatar Investment Authority (QIA), will be contributing $850mn while the remaining 15% will come from the Philippines government in the form of subscription. “We made a presentation of a series of priority infrastructure projects and other investment prospects to the Qatar Investment Authority. This includes basic infrastructure, telecom, property development, agriculture and fisheries,” Favila explained. However, QIA can undertake its own “due diligence” and decide which project the fund would be keen to invest in. “During the bilateral meeting there were highly encouraging words from HH the Emir no less when he said that he expects the visit of the president to produce very concrete and positive results,” Favila said. “The Emir also suggested to us that Qatar will need 37,000 more Filipino workers next year alone for some of the projects that the country will be putting in place,” he added. The two countries also signed a number of agreements. A few more are expected to be signed when the Emir visits Manila, after Arroyo formally extended an invitation during their talks. The Emir later led well-wishers and ministers who bade farewell to Arroyo upon her departure at Doha international airport yesterday morning. http://gulf-times.com/site/topics/article.asp?cu_no=2&item_no=261153&version=1&template_id=36&parent_id=16