Children in Qatar spend most of their free time playing: Study 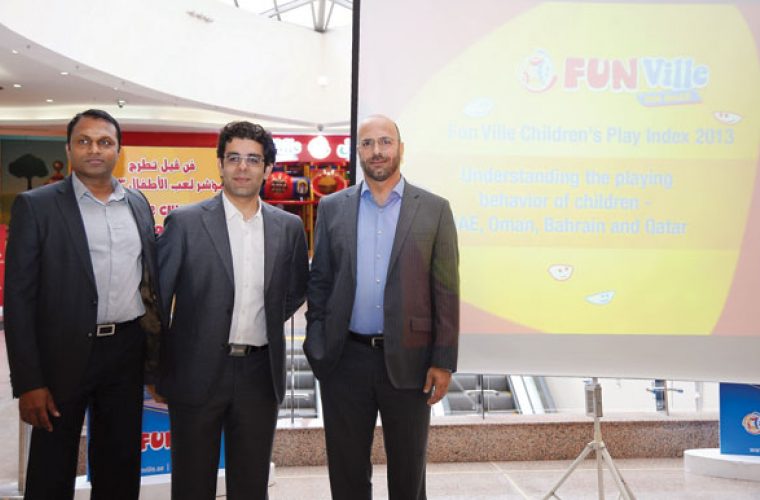 Children in Qatar enjoy most of their free time playing compared to children in other GCC countries, a recent study has found. According to a study on playing behaviour of children in the GCC, children in Qatar spend 33 percent of their free time in play-related activities compared to Bahrain (26), the UAE (21) and Oman (21) where the research was done. The Children’s Play Index (CPI) 2013 was announced by Fun Ville, a play area under the Landmark Leisure at a press event yesterday at Ezdan Mall. TNS, a global research organisation, conducted the study in September this year in the four GCC countries where Fun Ville is present. “This kind of information was never before available in the region,” Odisseas Trikaliotis, TNS Senior Group Account Director, told The Peninsula after his presentation. He revealed the four GCC countries had a combined index score of 25 which means children from these countries appear to have a good balance between play and other activities during their daily routine spending 25 percent of their total free time in play-related activities. The research which focused on children aged 2 to 12 also found close to 40 percent of them preferred spending time on games played on personal devices. This preference was highest in Qatar at 50 percent and lowest in Oman at 29 percent. In the age group of 9 to 12, this preference increases to 50 percent. Seventy percent of the parents surveyed depend on these games to keep their children entertained. Thirty percent of them are not aware of the games played by their children on these devices. Qatar also scored high on the average number of electronic devices owned which was 7 compared to the UAE (4), Oman (3) and Bahrain (3). Among the activities children do during their free time, eating scored the highest at 25 percent while reading was lowest at 0.5 percent. Qatar had higher than the average as children spent 27.7 percent of their free time on eating while least on creative time (1.8). The study also found children engaged more on passive (14) than active activities (11) and that mothers (27) were more involved in their children’s activities than fathers (7). Asian children spent less time playing compared to local Arab and Western and other expatriate children, the study revealed. Fun Ville Children’s Play Index is a survey conducted among 1,000 family respondents from different nationalities with children in the four GCC countries. The index defines the share of playing time among other daily activities excluding the time children spend at school. “Fun Ville’s Children Play Index is our effort to bring widespread awareness for a well-balanced growth and development of children in the region through a fair split of time spent between academic and play related activities during the day,” said Silvio Liedtke, Chief Operating Officer, Landmark Leisure. Kunal Harisinghani, Marketing Manager, Fun City said the study would be of great help in schools, the government and policymakers in Qatar and the entire GCC. “Many schools are visiting our facilities and we are actually sharing the results with them so they can design their timetables accordingly.” Parents can also compute their child’s play index using Fun Ville Play Index Calculator available at www.funville.ae. http://thepeninsulaqatar.com/news/qatar/264077/children-in-qatar-spend-most-of-their-free-time-playing-study