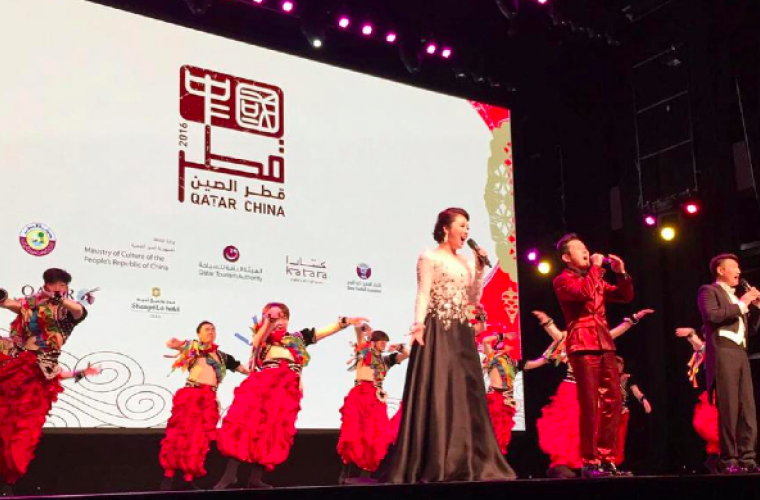 Under the patronage of its Chairperson, Her Excellency Sheikha Al Mayassa bint Hamad bin Khalifa Al Thani, Qatar Museums (QM) and the Chinese Ministry of Culture hosted an official opening ceremony on Sunday evening to mark the launch of the Qatar China 2016 Year of Culture.

The launch took place at the Drama Theatre in Katara, where a number of special performances were held throughout the evening which celebrated the rich heritage and culture of both Qatar and China.

As part of the Qatar China 2016 Year of Culture, a range of activities and events have been planned for all to enjoy in both countries. As part of this programme of cultural events, two major exhibitions will be held in Qatar.

The first of the two, “What About the Art? Contemporary Art from China”, is an exhibition from 15 contemporary Chinese artists curated by internationally acclaimed New York-based Chinese artist Cai Guo-Qiang, and will be on view at the QM Gallery Al Riwaq from March 14 - July 16, 2016. Artworks exemplifying each and every artist’s unique artistic language and methodology will be displayed in individual galleries, a curatorial approach further highlighting the distinctive creative pursuit of each individual participant.

The second major exhibition of the Qatar China 2016 Year of Culture, “Silks from the Silk Road – Chinese Silk Art”,will be on view from 24th March – 9 May 2016 at the QM Gallery Katara. The exhibition presents silk as a theme, and as a special local product of Zhejiang that played an important role in the trade along the Silk Road. The exhibition highlights ancient and modern Chinese silk works, with around 100 pieces due to be showcased at the QM Gallery in Katara in total. The exhibition aims to map out the history of silk and its cultural significance over thousands of years, and allows visitors to experience the charm of contemporary Chinese silk. A full programme of several other events will be announced throughout the year.

The bilateral years of culture were started under the guidance of HE Sheikha Al Mayassa bint Hamad bin Khalifa Al Thani in 2012. Designed to take Qatar to the world and bring the world to Qatar, the Year of Culture programme is a landmark initiative developed to deepen understanding between nations and their people through mutual exchanges of arts, culture, heritage and sport.