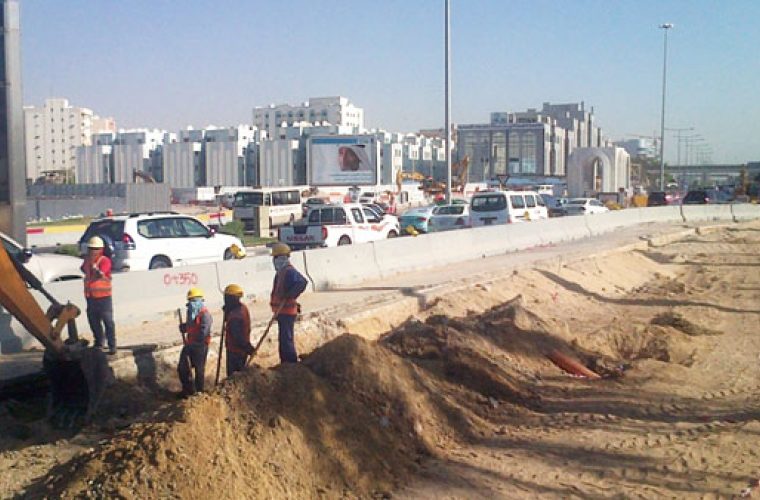 The Public Works Authority (Ashghal) has made considerable progress on the construction of the first phase of the C-Ring Road development project.

The Umm Ghuwailina roundabout, also known as the VIP roundabout has been removed and converted to an intersection, said a statement.

Currently, Ashghal is laying the pre-final layer of asphalt on the newly added lanes on this intersection and will soon start installing traffic lights and connecting them to the Intelligent Transportation System (ITS), it said.

As part of the project, Ashghal has diverted and protected the existing infrastructure utilities in the area and upgraded them, in addition to laying asphalt on both sides of the road stretching from Umm Ghuwailina roundabout to Najma intersection.

The first phase of the project, which started last month, stretches from Umm Ghuwailina roundabout to midway between Najma and Al Mansoura intersections.

It aims to widen the road to four lanes in each direction and convert Umm Ghuwailina roundabout to a signal-controlled intersection.

The full works on the first phase of the project are expected to be completed as per schedule in the third quarter of the ongoing year.

The project involves a 6.3km stretch from C-Ring Road’s intersection with Salwa Road (Jabur bin Ahmed intersection) to Umm Ghuwailina roundabout and consists of widening C-Ring Road from three lanes to four and converting a number of roundabouts to signal-controlled intersections.

This is in addition to adding three new U-turns with pedestrian crossings before the intersections. To keep the public fully informed about this vital project, Ashghal has implemented an integrated awareness programme.

Before the start of the works on the project, brochures in English and Arabic were distributed to all businesses in the area to inform people about the details of the project and a designated community liaison officer was appointed, to respond to any related requests and inquiries.

Since the commencement of the project, Ashghal has solved a number of issues raised by the local community such as providing alternative parking space for businesses and co-ordination with companies to remove signage on the street, to allow construction works.

It is noteworthy to mention that a specialised company was appointed to remove and relocate the Clock Tower at the VIP roundabout, without damaging the structure. The Clock Tower will be reinstalled at a location designated by the Ministry of Municipality and Urban Planning.

The C-Ring Road development project is part of a series of projects implemented by Ashghal to improve the network of local roads and expressways across the country.