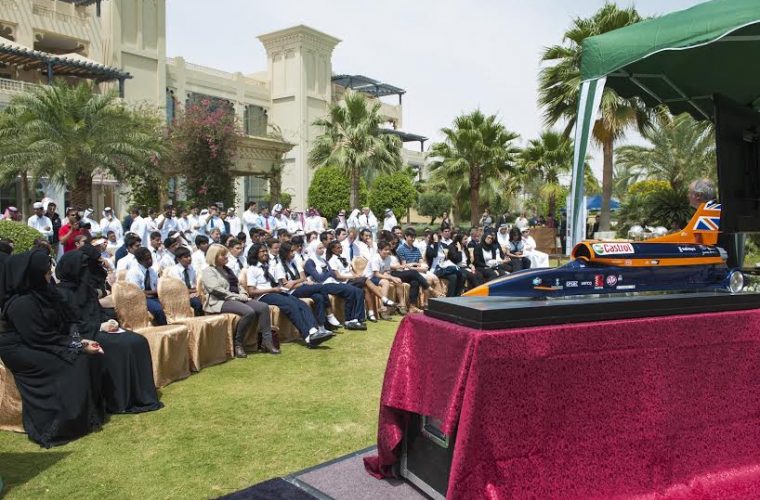 As part of British Festival 2014, the University of the West of England, (UWE Bristol), showcased yesterday the UK’s world-class engineering and innovation expertise through their work supporting the Bloodhound SuperSonic Car (SSC) in Doha. Bloodhound SSC is a jet and rocket powered car designed to travel at 1,000 mph (just over 1,600 kph). Weighing over 7 tonnes, its engines produce over 135,000 horsepower - more than 6 times the power of all the Formula 1 cars on a starting grid, combined. The car is a hybrid of automotive and aircraft technology, with a carbon fibre monocoque in the front and metallic framework and panelling at the back. Its slender body of approximately 14m length contains two front wheels within the body, and two rear wheels mounted externally within wheel fairings The UWE Bristol team displayed a 2m scale model of the car to invited students from a number of schools in Qatar, who attended a lecture about the ground-breaking project. The lecture explored the challenges the team had encountered and overcome so far, and shared some of the ways UWE Bristol students have participated in BloodhoundSSC whilst studying. The educational component was followed by a VIP event, consisting of a lecture and reception held at the Grand Hyatt. Both lectures were hosted by Professor Richard Noble, Project Director for Bloodhound SSC. The evening’s festivities also welcomed Qatar’s industry leaders and decision makers, as well as motor enthusiasts all keen to learn more about the engineering expertise emanating from British educational institutions. Martin Hope, Director of British Council Qatar said: “Since the launch of the British Festival, the British Council together with the British Embassy Doha have been highlighting the best of Britain in Qatar. Education, innovation and engineering are traditionally very strong British trademarks and the Bloodhound SSC is the result of the collaboration between some of the greatest visionaries in the UK today. We are very pleased to be able to share this knowledge and enthusiasm with local students, business leaders and decision makers. ” Dr John Lanham, Associate Dean Partnerships, UWE Bristol, said: “As one of the five founder sponsors of the BloodhoundSSC project, UWE Bristol are very proud to be partnering with Richard and the team on this project. The core aim of BloodhoundSSC is to encourage more youngsters to engage and study STEM – Science, Technology, Engineering and Mathematics. Not because we need people to design fast cars – but because the skills, technology and capabilities used to design Bloodhound are the skills required to develop low energy, sustainable, resource efficient solutions to the challenges we all face in these early years of the 21st Century. These values align closely with UWE Bristol’s aim to inspire and enable people to change their life and part of the world they live in”. For the latest updates on the British Festival 2014, follow the British Council Qatar (@qaBritish) and the hashtag #BritFestQA on Twitter. The British Festival is sponsored by Qatar Shell and BAE Systems, and supported by many local partners such as Bhs, Debenhams, East India Company, Ezdan Mall, The Four Seasons, Grand Hyatt, Hackett, Hilton Hotel, Imperial Advertising, Intercontinental Doha – The City, Jo Malone, Molton Brown, LuLu Hypermarket Trading Group, Pizza Express, Renaissance Marriot Hotel and Spinneys. - ILQ News -