Australia to open embassy in Doha 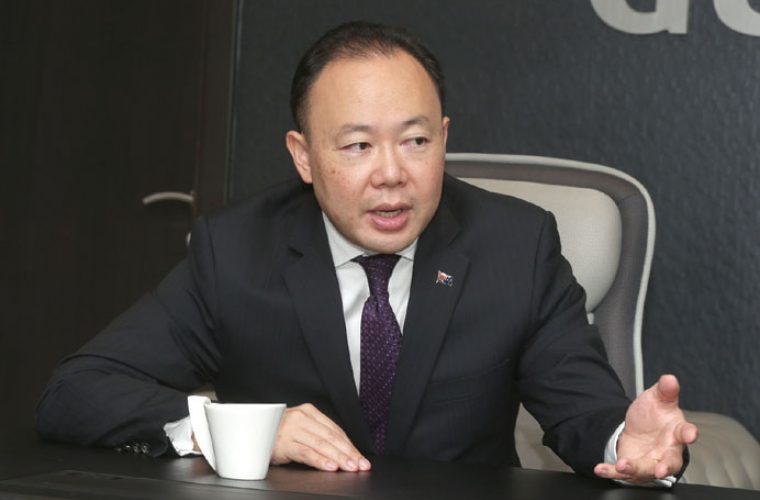 Australia will open a full-fledged embassy in Doha next year, Pablo Kang, the country’s ambassador to the UAE and Qatar, told Gulf Times yesterday.
“Australia is looking forward to increased levels of co-operation with Qatar, which is home to nearly 5,000 of its nationals,” he explained.
The Gulf states together account for about 35,000 Australian nationals, working at different levels, and almost 22,000 of them are in the UAE alone. Of the remaining, 6,000 are in Saudi Arabia and Qatar has the third largest Australian population in the region, said the envoy, who has been looking after Qatar from his country’s mission in Abu Dhabi for more than 42 months now.
Australia is on the lookout for a suitable premises for housing its embassy in Doha, it is learnt.
While deliberating on an array of issues, Kang hoped the co-operation between Australia and Qatar would grow to considerably larger levels with travels between the two countries showing a phenomenal rise in recent years.
“A number of our topnotch firms covering different areas are actively involved in the development of Qatar and our professionals are at work in such areas as aviation, oil and gas, railways, hospitality, education, healthcare among others.”
The ambassador said Australian educational sector is looking forward to more fruitful tie-ups with the Qatari institutions and also hope to attract students from the country for higher education at the colleges and universities in Australia.
“Six or seven of our varsities are ranked in the top 100 in the world and are drawing children from across the world,” said Kang while expressing optimism that many students from Qatar would opt for institutions in Australia.
The envoy said more than 10,000 Saudi Arabian students are pursuing academic programmes in Australian institutions and this could be possible only because of their extensive familiarity with the quality of education that Australian campuses provide.
There is already an institutional level co-operation between Qatar University and some of the Australian universities and presidents of QU have already visited universities in Australia more than once in recent years.
Qatar Airways’ growing route network has increased travel between the two countries, the ambassador observed. “Qatar’s national airline is already flying daily to Melbourne and Perth and we have found more Australian destinations would be added by the airline in the coming days,” he said.
Though the bilateral trade between Qatar and Australia stood at $1bn, the ambassador expected a giant leap in the coming years. “Already, a number of Australian brands and businesses are active in the local market and the possible resumption of talks on Free Trade Agreement (FTA) between the GCC and Australia could contribute to considerable growth in bilateral trade between Qatar and Australia sooner rather than later.” The GCC called off FTA talks with Australia in 2009.
The ambassador pointed out Australian construction major Leighton and its partners are currently executing the largest road infrastructure project in Qatar, the Orbital Truck Route.
“Similarly, another Australian major firm has become a force to be reckoned with in the industry of providing support to those intending to set up businesses in Qatar.” In retail sector also, Australian brands have stepped up their role in the local market, he said while citing the entry of a prominent brand.
Kang has no doubt that companies from Australia would play a major role in Qatar’s FIFA 2022 World Cup preparations. “We have hosted World Cup, Commonwealth Games and several other world level sport extravaganzas and it is known to all that our companies have stood out with their diverse and varying abilities at different levels,” he said while deliberating on next year’s World Road Cycling Championship which Qatar is hosting.
He said Qatar Olympic Committee and Australian Olympic officials are in negotiations for the conduct of road cycling championship.
The ambassador also mentioned about the growing levels of co-operation between Qatar’s Hassad Foods and the Australian partners. The local company has invested heavily in Australia and it would boost food exports to Qatar, he felt.
Similarly, live sheep export to Qatar from Australia is also bound to grow, Kang added.

Arabic third largest foreign language in Australia
Arabic is the third largest foreign language in Australia, the Australian ambassador to the UAE and Qatar, Pablo Kang, has said.
Mandarin and Italian are the top two foreign languages spoken in Australia.
“There has been a considerably large migration of Arabic-speaking people from Lebanon, Syria and Egypt over the last several decades and now the 24mn-strong Australian population has a significant Arab presence,” the envoy explained.
Kang said his country has an effective and strong migration policy which allows nearly 13,700 people yearly to migrate to Australia. “However, in exceptional situations as the latest Syrian crisis, the country accepts more people to its territory from the UN pool,” he said. Hence in addition to its regular quota, Australia has agreed to take 12,000 Syrian refugees this year, said Kang.
However, Australia would not receive those attempting to enter its territory illegally through boats from one of the neighbouring countries.
“Under no circumstances we would not dilute our widely acceptable immigration norms and procedures to allow such illegal migrants,” he added.