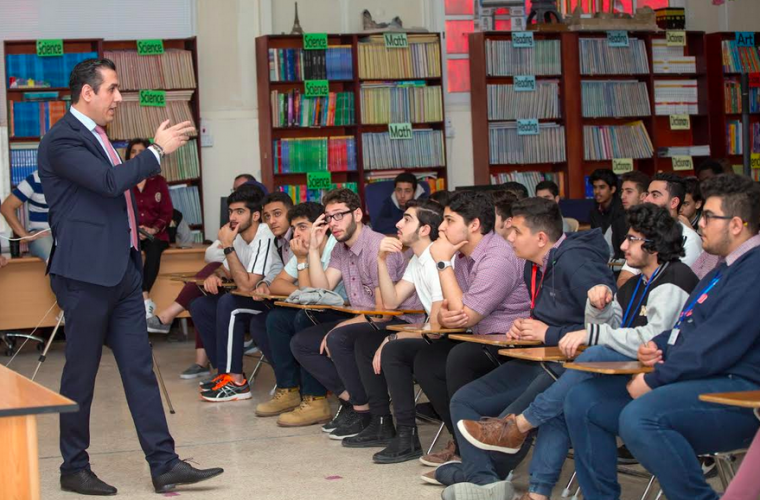 Alfardan Sports Motors, the official dealer of Ferrari and Maserati in Qatar, launched a first-of-its-kind safety drive across schools in Qatar to raise awareness on the perils of speeding. Revered for their lineage of the world’s fastest cars, the two iconic automotive brands reaffirmed their commitment to safety by spearheading a pioneering initiative that aims to foster a culture of responsible driving among the nation’s youth.

The safety drive kicked-off at the Global Academy International where representatives hosted a comprehensive interactive session in which they presented thought-provoking facts and figures on the rising occurrences of traffic incidents. According to the annual statistics shared by Qatar’s Traffic Department, speeding was reported as the key cause of road deaths in 2016 with an average of 4564 violations per day. Despite celebrating the passion for speed on the racetrack for years, students were encouraged to place safety above thrill when on the road – at all times.

Another major issue highlighted by the campaign was the dangerous trend of distracted driving and its fatal repercussions. Citing data from the Traffic Department, the dealership informed a tech-savvy audience that 80% of accidents were caused by mobile phone usage. In fact, smartphones topped the list of common driving distractions, which included eating, or drinking, adjusting radio or temperature controls, other vehicle occupants as well as driving on autopilot.

In an effort to instil road discipline among the youth, students were briefed on the importance of street signs in addition to the benefits of wearing a seatbelt. In a study conducted by Curtin University in 2012, 57.3% of young drivers in Qatar chose not to buckle up while driving. About 46.2% respondents stated discomfort as the primary reason to avoid seatbelts, while others lacked confidence in its ability to save lives. Dismissing this misconception, the dealership revealed to students that seatbelts reduce the risk of death by 45% and risk of serious injury by 50%, according to a study by the Centers for Disease Control and Prevention.

Commenting on the launch of the safety drive, Charly Dagher, General Manager of Ferrari and Maserati Qatar at Alfardan Sports Motors, said: “Ferrari and Maserati have for long held an illustrious racing heritage. Though speed is part of their sporty DNA, both brands have continuously strived to achieve the highest standards of safety as part of their unparalleled automotive excellence.”

He added: “Given the alarming rate of traffic incidents in Qatar, we believe it was necessary to bring about a change, especially among the young generation. The youth are most susceptible to reckless driving and we hope to turn them into disciplined drivers. Through our campaign, we aim to reach out to as many schools in the country and demonstrate to young students the true meaning of responsible driving that we, as a brand, strongly support.”

On her part, Mrs Issmat Munir El Sheikh, Principal of Global Academy International, said: “Safety is one of the key lessons that we impart to our students on a daily basis. We are proud to be part of this unique initiative by Alfardan Sports Motors. It’s beneficial for our children to understand about the importance of road safety at a young age, and what’s even better is that they learn it from their favourite car brands.”

The safety drive was initiated in line with the 33rd GCC Traffic Safety Week. Alfardan Sports Motors is committed to delivering a world-class brand experience by inspiring customers to follow road safety practices.