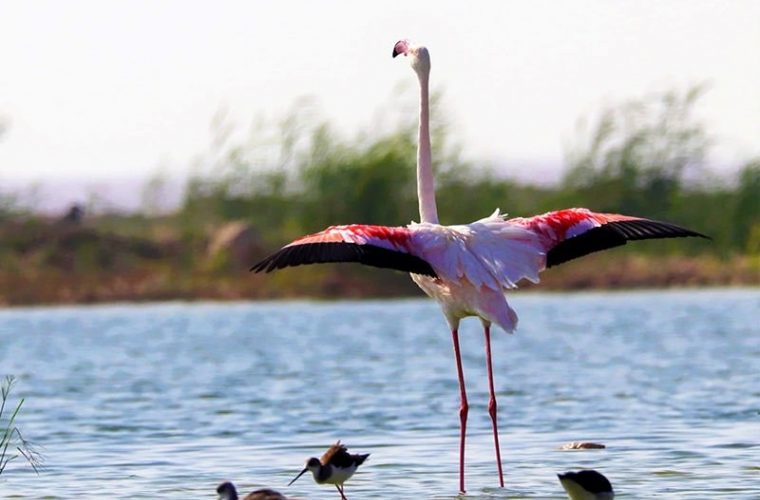 The Public Works Authority ‘Ashghal’ announced Saturday 16 November, 2019 the completion of works of the Reclamation and Rehabilitation project in Al Karaana Lagoon. The announcement came during a field visit to the project site in the presence of H.E. Dr. Eng. Saad bin Ahmad Al Muhannadi, President of Ashghal, Eng. Ahmed Mohammed Al-Sada, the Assistant Undersecretary for Environmental Affairs in the Ministry of Municipality and Environment (MME), a number of Ministries’ Undersecretaries and Assistant Undersecretaries, and H.E. Frank Gillet, French Ambassador to Qatar, stated a press release from Ashghal.

The event was also attended by officials from MME, CMC member for Constituency 22, representatives of a number of environmental entities, and residents of Al Karaana area. A group of students from Al-Karaana Independent School for Boys also participated in planting trees at the site.

The project aimed at removing pollutants and minimising health risks to the environment surrounding Al Karaana lagoons, which had been used for more than ten years in dumbing industrial effluents. The project also aims to protect and enhance the Qatari environment by rehabilitating the area and transforming it from an unfavorable habitat into a wildlife habitat with diverse species of birds and fish. It also provides a green rest stop with clean water for migratory birds flocking over the country.

Al-Karaana Lagoon, located 60 km southwest of Doha, was once home to 10 separate lagoons not lined with an insulating layer. It had been used since 2006 to receive about 6,000 cubic metres of industrial wastewater every day, resulting in accumulation of sediments and solids at the bottom of the lagoons, and the formation of a contaminated layer (sludge) of up to 3.5 m in some areas.

The project re-established the area by draining the old lagoons and treating the contaminated soil at their bottom, using international expertise to assess the levels of pollution and treatment of all contaminated sediments directly at the site, in order to re-establish the natural area and ensure the protection of the environment.

One of the most important components of the project are the three artificial lagoons which were designed to store about 2.4 million cubic metres of treated sewage effluent coming from Al Karaana treatment plant.

With clean water and green areas around them, the artificial lagoons form a new healthy habitat for wildlife, and they now include various types of birds, swans, fish, frogs and others.

The project also included the construction of two temporary evaporation ponds for industrial effluent, with a storage capacity of 1.2 million cubic metre of liquid waste. The ponds are protected with a strong insulating layer that prevents leakage of contaminated water into the groundwater, with oil separation units. The evaporation ponds are operational since one year and will remain in use until the completion of the new industrial wastewater treatment station. It is worth mentioning that the evaporation process is a completely natural process that depends on sunlight and heat.

The project also used a Mobile Thermal Drying Unit which imported from the Netherlands especially to treat highly contaminated soil by heating the soil up to 400°C. About 40,000 tons of sludge were treated and then moved to a landfill designed and built to the highest international standards.

Towards a Green Environment

In line with the continuous efforts to achievement Qatar National Vision 2030 in the field of environmental sustainability and preserving Qatar’s natural environment, and as part of the ongoing campaign “Qatar Beautification and Our Kids Planting Trees” launched by the Supervisory Committee for Beautification of Roads and Public Places in Qatar to “Plant Million Trees” in coordination with the Ministry of Municipality and Environment, Ashghal organised a tree planting activity during the site tour in Al Karaana Lagoon project. A group of students from Al Karaana Primary, Preparatory, Secondary Independent School for Boys participated in planting trees at the project site, after learning about the importance of the project in protecting the environment and contributing to its prosperity.

It’s worth noting that the Reclamation and Rehabilitation project in Al Karaana Lagoon was implemented by the French company “Suez”, one of the leading companies in the field of soil treatment. “EGS” company provided initial studies and design as well as consultancy services during construction and on-site reclamation. The main rehabilitation works were completed six months ahead of schedule. The project was scheduled to be completed in mid-2020.