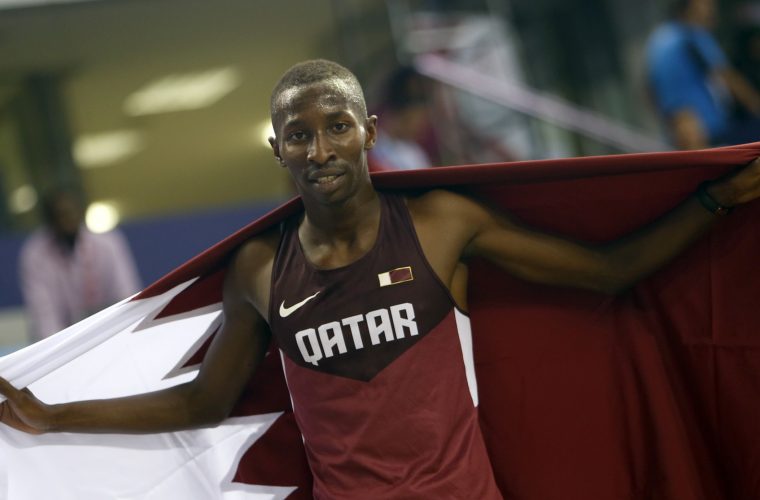 DOHA – Mohamed Al-Garni of Qatar successfully defended his second title of the weekend to highlight the final day of the 7th Asian Indoor Championships at the Aspire Dome in Doha.

Five more championship records fell on the third day of competition, but it was Al-Garni’s in the 3000 metres, which propelled him to a second successive Asian indoor double-double triumph, that stood out from the rest.

Biding his time behind Bahraini Albert Rop for much of the race, Al-Garni took the lead for good as he entered the back straight for the final time. Unlike the early celebration in Saturday’s 1500 metres that likely cost Al-Garni the Asian record, this time his finish was more subdued: just a raised arm two strides before the finish as he powered through the line in 7:39.23 to equal the fifth fastest time of the year.

"It wasn’t my plan to stay behind Rop, it was his tactic to make me tired after he watched me running the 1500m yesterday," Al-Garni said. "Still I was able to stay close behind him and make the final kick in the last lap."

Al-Garni said he still hasn't decided whether he'll contest the 1500 or 3000 metres at the upcoming World Indoor Championships in Portland, Oregon, USA, or even if he'll compete there at all.

"We still have time to decide," he said, but added, "I feel very strong this year. I have been one hundred prepared focused in my training."

Rop finished just a few strides behind in 7:40.27 with Qatari Said Aden Said taking third with a personal best of 7:44.69 to collect his second bronze in as many days.

Qatar’s first gold of the afternoon came in a thrilling men’s 800 metres contest where Abdulrahman Musaeb Balla took the victory as expected.

It was a strong run for the two-time Asian champion who took command from the outset and was never headed en route to a 1:46.92 championships record.

"I wanted to win and set a new area record as well, but I didn’t recover in time after the unsuccessful attempt to beat the Asian record in Stockholm," said Balla, who clocked 1:45.93 in the Swedish capital, 0.7 seconds outside of Yusuf Saad Kamel’s continental mark. "Nevertheless, victory makes me really happy. I expect a very good result in Portland at the World Championships as well as at the Olympics."

Behind him an intense battle ensued.

Qatari teammates Abubaker Haydar Abdalla and Jamal Hairane shadowed Balla, trying to gain and hold position for a host nation sweep. But Mostafa Gholamerza Kordiyani of Iran wouldn't relent. Heading into the the homestretch, first Hairane and then Kordiyani found another gear to overtake Abdalla to finish second and third in 1:48.05 and 1:48.26 respectively.

A similar scenario played out in the women’s race.

Marta Hirpato of Bahrain settled into the leading positions about 80 metres into the race, with Nimal Waliwarsha Arachchige of Sri Lanka and Japan’s Yume Kitamura giving chase. The order remained three-and-a-half laps later with Hirpato powering away to win in 2:04.59 to the Sri Lankan’s 2:04.88. Kitamura was later disqualified for a lane infraction elevating Tatyana Neroznak of Kazakhstan to bronze.

Another successful title defence came courtesy of Abdulazeez Almandeel of Kuwait who prevailed in 7.60 in the 60 metres hurdles. His time was his second national record and championships record in as many days and landed him among the season's top-10.

"I am so excited with my time," said Almandeel, who arrived in the Qatari capital with a career best of 7.74. a new national and Championships record. "I feel I can run faster in Portland and secure a place in the final."

In the women’s contest it took a photo reading to separate Kazakhstan’s hurdling Anastasiyas. The verdict went in favour of Anastasiya Soprunova over teammate Pilipenko by a scant two one-thousandths of a second as each were credited with 8.17.

The penultimate event, the women's 4x400 metres relay, witnessed another Asian record courtesy of Bahrain. The Quartet --Alwa Eid Naser, Uwaseun Yusuf Jamal, Iman Essa Jasim and Oluwakemi Adekoya-- clocked 3:35.07 to eclipse the mark set by an Indian quartet at these championships in 2008.

Elsewhere, Favourite Svetlana Radzivil won the women’s high jump at 1.92m, ahead of teammate Nadiya Dusanova (1.88m) to lead a 1-2 finish for Uzbekistan.

The 8th edition of the Asian Indoor Championships will be hosted by Ranchi, India, in February 2018.