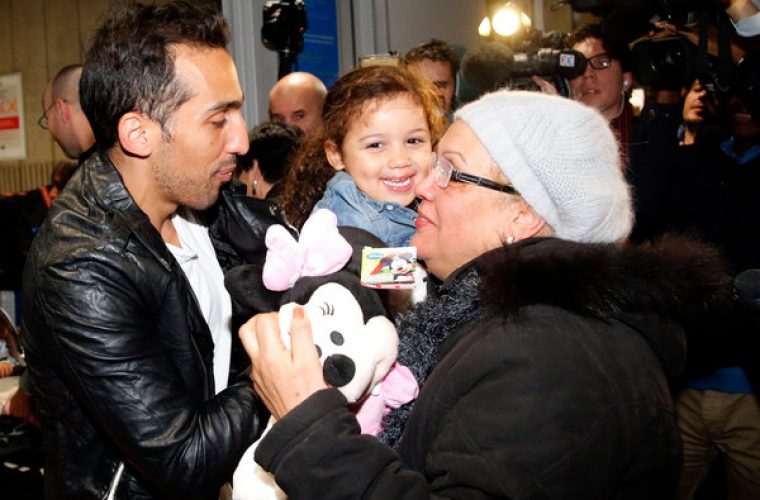 Zahir Belounis’s Qatari ordeal ended not with a letter or a visa stamp or even with a visit from an official delivering news of his impending departure from the emirate. It ended with a phone call telling him to leave the country, and quickly. “Someone called me and said: ‘Tomorrow, you leave. You have 24 hours,’ ” Belounis, a 33-year-old French soccer player of Algerian descent, said in a telephone interview Friday. “I just took my two daughters and wife and ran to the airport,” he added. “I was so happy.” Belounis, a journeyman player who moved to Qatar in 2010, had been trapped there for more than 18 months because of a protracted legal dispute with his club, el Jaish. He said that his pay was stopped two years ago in a dispute about his transfer to a new club. When he tried to argue his case through the Qatari legal system, he was effectively barred from playing or from leaving the country by the country’s kafala labor laws, a system of sponsorship that ties any foreign worker to his employer. With his employer refusing to allow him an exit visa, Belounis, sinking into depression, had been trapped — until Wednesday, when he and his family made a nervous drive to the airport. “When I arrived at the airport, I was told my exit visa was on the computer; it is not a paper,” he said, describing his departure. Without any physical documentation, Belounis feared that the Qataris might change their mind at the last minute. He said he was not sure whether he would be going home until he finally passed immigration. “It was on the computer,” he said. “Then they said, ‘Go ahead.’ ” With no salary and no freedom to find another job or leave Qatar, Belounis and his family survived on money sent from relatives in France as well as donations from the French expatriate community in Qatar. But he said he had also been helped by Qataris who had heard of his case. “My house was empty — we had sold all of the furniture — and some Qatari people I didn’t know came and paid for a hotel for me, my wife and my daughters,” he said. “I have some Qatari friends, but also some I didn’t know, too. They said, ‘We have to help you.’ ” The case had become something of a public-relations disaster for the 2022 World Cup organizers and for soccer’s governing body, FIFA, which awarded the tournament to Qatar in 2010. Although stadium construction has yet to begin, the project has been inundated with negative publicity, much of it relating to Qatar’s poor record on workers’ rights. In response, the Qatar 2022 Supreme Committee has published a so-called workers’ charter, which it says will guarantee tough minimum standards on all World Cup construction projects. FIFA’s president, Sepp Blatter, has raised the issue of workers’ rights with Qatar’s new emir, and he recently called reports of abuses there unacceptable. But Belounis said Friday that he still held affection for the country where his two daughters were born and where he experienced the kindness of Qataris appalled by his treatment. “I have a problem with just a few people in the club,” he said. “But the rest of the Qataris were very sad for the situation.” He said he believed Qatar would hold “an amazing World Cup” but added that the continuing issue of workers’ rights needed to be addressed. “They have to see,” he said, referring to Qatar’s government, “with my situation, there are people that will abuse the current system.” The last few days were the toughest for Belounis, he said. He cried every day, he said, finding solace only with his wife, their children and a small group of French expatriates who are all in disputes with their Qatari employers, including a soccer coach, Stéphane Morello, and an entrepreneur named Nasser al-Awartany. Their cases have been well publicized in France. “My pleasure is not what it should be,” Belounis said of his parting with al-Awartany at the airport in the capital, Doha. “He hasn’t seen his child in two years. He was crying and said, ‘Don’t forget me.’ ” Belounis does not know whether he will play soccer again. He is 33 and was in the twilight of his career even before such a long break from playing competitively. His case against el Jaish, where his contract was to have run until 2015, is still active, and he still hopes one day to see the money he says he is owed. But he said he was most hopeful that his experience would lead to change in Qatar. “Everywhere in the world there are bad people: France, England, Qatar,” he said. “People in Qatar will now think twice before doing a bad thing again. I hope all the best for Qatar.” For now, Belounis will spend time with his family. When he emerged into the arrivals hall at Charles de Gaulle Airport near Paris on Thursday, he was greeted by a sea of flashlights, microphones, television cameras and his mother. It had been 19 months since Belounis had seen her. “She was the first person I saw,” he said. “I was so happy to see her — you cannot imagine. She just said: ‘I love you. I love you.’ ” http://www.nytimes.com/2013/11/30/sports/soccer/zahir-belounis-recounts-race-to-the-airport-in-qatar.html?_r=0