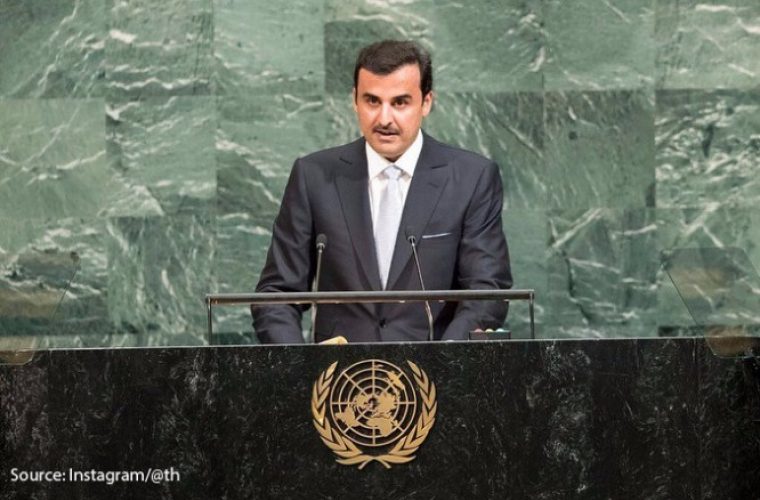 His Highness the Emir of Qatar, Sheikh Tamim bin Hamad Al Thani addressed the United Nations General Assembly last night. In his speech, the Emir highlighted a variety of topics concerning peace in the Middle East, the GCC crisis and the humanitarian crises facing the world. These were the 5 main issues he discussed:

The Emir addressed the Israeli occupation of Arab territories and said that Israel stands in the way of achieving lasting peace. He stressed the importance of prioritizing peace negotiations and ending the Israeli occupation to achieve a just and comprehensive settlement according to the internationally agreed upon two-state solution. This, he added, can only be achieved through the establishment of an independent Palestinian state with Jerusalem as its capital.

He brought light to the situation in Syria and the inability of the international community to arrive at a solution for it. He also declared that Qatar will spare no efforts in its attempts to alleviate the suffering of the Syrian people.

The Emir echoed his earlier statements about Syria when he spoke about Yemen. He urged the international community to facilitate assistance to Yemen and reiterated Qatar’s support for the UN’s efforts to end the Yemeni crisis.

Regarding the issue of Libya, he stressed that the Libyan consensus can be reached by combining domestic and international efforts and that the state of Qatar has and will continue to support mediation efforts for the Libyan people.

He commended the efforts of “brotherly” Iraq in attempting to achieve security and in its fight against terrorism. He affirmed the necessary support to Iraq in order to restore its regional and international role.

2. The GCC crisis: circumstances and consequences

The Emir stated that the hacking of the Qatar News Agency earlier in the year was an assault on the sovereignty of the state of Qatar and that the crime was committed merely for political aims. He raised concerns about the international measures taken with regard to digital security.

He said the unjust blockade on Qatar infringed on the rights of the people by causing human rights violations and pressured the citizens in terms of foodstuff, medicines, etc. He also addressed the restrictions put on the citizens of the blockading countries and the fines and punishments implemented for sympathizing with Qatar. He said these countries allow themselves to attack a neighboring country and dictate its media and foreign policy and also believe that their funds allow them to blackmail other countries to join them in their aggression against a neighboring country.

The Emir did not fail to express his pride in the people of Qatar, both its citizens and its residents. He commended the Qatari people for their resilience and belief in the independence and sovereignty of Qatar despite the intensity of the campaign against the country.

He also praised the mediation efforts made by the Kuwaiti ruler, His Highness Sheikh Sabah Al-Ahmad Al-Jaber Al-Sabah.

3. The importance of dialogue and negotiation in resolving disputes

The Emir renewed Qatar’s call for constructive dialogue based on mutual respect between the GCC countries and Iran on the basis of common interests, good neighborliness and non-interference in internal affairs. He also called for dialogue as they key means to achieving peace internationally.

4. Qatar’s stance and its role on fighting terrorism internationally

His Highness also touched on Qatar’s role in the fight against terrorism — something the world has been witness to. He said Qatar stands by those fighting terrorism using security forces and also believes in fighting it ideologically, emphasizing the importance of not using the fight against terrorism as an umbrella for shelling of civilians. He reaffirmed the condemnation by the state of Qatar for all forms of extremism and terrorism and ensured that it will continue to be Qatar’s highest priority. He also rejected tackling this phenomenon with double standards by linking it with any particular race, religion, culture, civilization or society.

The Emir spoke about Qatar’s constant contributions towards efforts to tackle humanitarian crises and that the country has increased its financial contributions to the United Nations Office for the Coordination of Humanitarian Affairs (OCHA) to help those in need worldwide. He mentioned Qatar's high international ranking on the list of major donors to the UN OCHA. The Emir concluded with remarks about Qatar sparing no effort in working towards strengthening the efforts of the UN in achieving international peace and security.

Source for translated speech: The Peninsula