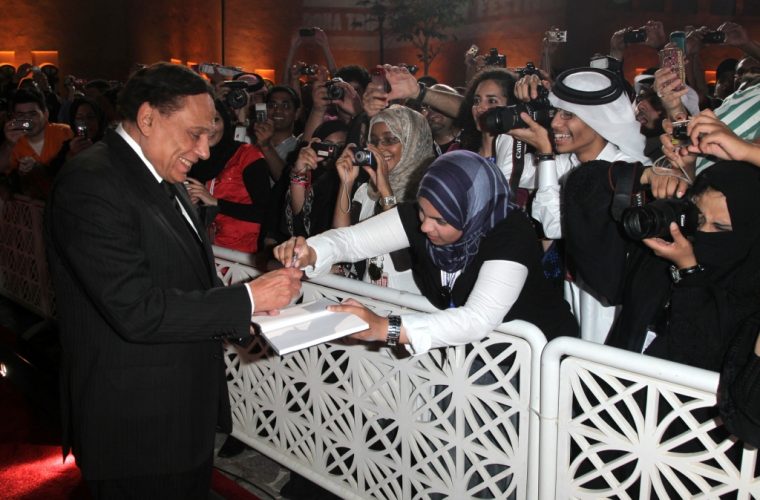 2010 Doha Film Institute Honours Adel Imam with DFI Lifetime Achievement Award at the Doha Tribeca Film Festival Festival to host retrospective tribute to celebrate Imam’s illustrious career
Doha, 27 October, 2010: The Doha Film Institute will honour Egyptian screen legend Adel Imam with the inaugural DFI Lifetime Achievement Award for his outstanding contribution to Arab cinema. The celebrated actor, fondly referred to as “the Egyptian Charlie Chaplin,” is widely regarded as one of the most talented actors to emerge from the Middle East. His success transcends the Arab world and Imam is a driving force behind memorable films, such as “Omaret Yakobean” (“Yacoubian Building”) and “al Mutasawel” (“The Beggar”) that showcase his trademark ability to use humour to address social issues, while promoting tolerance and justice. Two seminal films including "Hassan wa Morcos" and " Al-Irhab wal Kabab" will be part of the Festival’s retrospective screening that pays tribute to an icon of Egyptian and Middle Eastern cinema. The screenings will take place on Friday, October 29, at the Four Seasons Beach Theatre. Please visit Festival website: www.dohafilminstitute.com/filmfestival for movie listings. Two of Imam’s most hilarious films – 1993’s “Al-Irhab Wal Kabab” (“Terrorism and Barbeque”) and 2008’s “Hassan Wa Morcus” (“Hassan and Morcus”) – deal with powerfully serious subjects including governmental regulation, violent extremists, and tensions between Muslims and Christians. Each of these successful farces also feature Imam’s unique brand of humor, containing double entendres, slapstick comedy and well-meaning yet hapless characters under extreme pressure who find themselves fighting authoritarian bureaucracies and spiritual zealots. Audiences who go to these films, as with all of Imam’s work, will find themselves laughing very hard and, perhaps, thinking even harder about their underlying meaning. His Excellency Sheikh Jabor Bin Yousuf Al-Thani, DFI Festival Board Member said: “Adel Imam is a true phenomenon and continues to be a trailblazer in the Arab world as one of the most successful comedic actors. The DFI Lifetime Achievement Award is in recognition of all his performances that have inspired legions of fans across the globe and specially in Qatar. This is our way of paying tribute to a legend of Arab cinema and is our privilege to honour such a distinguished artist in Doha, the 2010 Arab Capital of Culture. DTFF has proven that Doha is an excellent destination for world cinema and a unique platform for global communities to get together for better cultural understanding.” Amanda Palmer, Executive Director of DFI, commented, “The DFI Lifetime Achievement Award is a retrospective tribute that celebrates the world of influential filmmakers from across the globe. We are thrilled to be presenting Adel Imam with the inaugural award in Qatar, where we celebrate storytellers and inspirational creative talent. Screenings of his acclaimed oeuvres will act as a source of inspiration to emerging filmmakers that we are confident will take the regional industry to new levels of growth and international recognition.” Adel Imam, a United Nations Goodwill Ambassador, has fought injustice and corruption in movies and is aligned to various social and political issues. He has been king of the comedy scene in Egyptian cinema for more than 30 years. Hugely popular in the Arab world and beyond, Imam has radically changed the prevailing stereotype of the Egyptian starring role, from elegant, well-to-do young man, to regular guy in modest clothes, irreverently humorous in his quest for good, justice and dignity. Adel smartly listened to the pulse of the people in the street, reading between the lines and examining more and more closely the plight and dreams of the poor. -ENDS- About Adel Imam Born in 1940, to a modest family in one of Cairo’s populous districts, Adel didn’t start his professional acting career until his mid-20s. He has appeared in over 50 movies since 1966 as well as nearly a dozen stage plays and numerous television series. Shortly after graduating as an agricultural engineer, he drew attention for his performance in a minor role in a comic play, Me, You and Her. Adel made it to stardom in a hugely successful stage comedy, School of the Bad Boys, then moved to cinema, starring in I Have the Wallet (1978) and Rajab on a Hot Tin Roof (1979). Widely recognized as a comic actor, he branched out into more serious roles in the 1980’s and has also made brave, personally dangerous stands by coming out against religious fanaticism and brutal dictatorships while supporting human rights and tolerance for all. About Doha Tribeca Film Festival As the Doha Film Institute's annual celebration of all things film, the Doha Tribeca Film Festival (DTFF ) is a community minded five day event that showcases the best of Arab and international films. The Festival also reflects DFI´s film financing and year-round educational arms with industry programs and filmmaker events designed to fulfill DFI´s mission of empowering storytellers and building a long term film industry in Qatar. Launched in 2009, the Doha Tribeca Film Festival reflects a successful cultural partnership between DFI and Tribeca Enterprises. Based on a mutual mission to promote the influence of cinema, the importance of community culture and the need for arts education, the Festival provides an annual platform that celebrates the wonders of film appreciation and entertainment from every corner of the globe. DTFF 2010 is proud to be supported by: official airline partner Qatar Airways, official telecom service provider Qtel, official sponsor Volunteer Programme Virgin Mobile Qatar, official sponsor Opening Night Screening Gala Al Fardan, and hospitality partners Four Seasons Hotel, W Hotel, and Grand Hyatt.