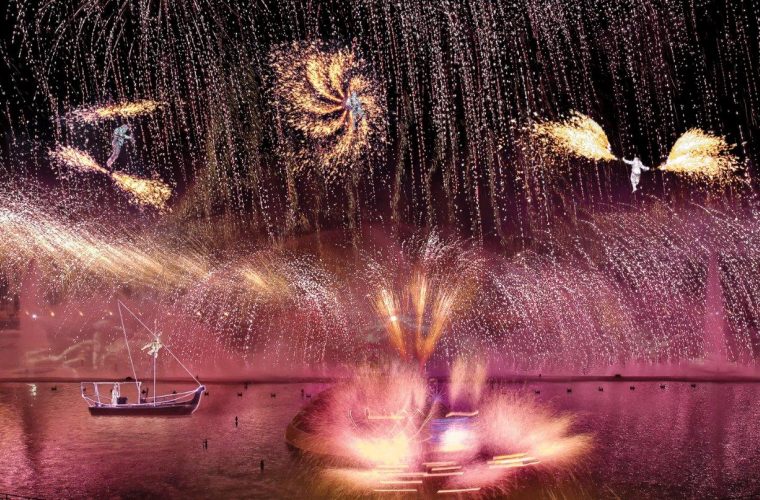 In keeping with its commitment to support Qatar’s tourism and entertainment sectors, Aspire Zone Foundation (AZF) is adding the final touches to the 2nd Aspire Lake Festival, due to take place this weekend from 23-24 March in Aspire Park.

Organised this year in partnership with Ooredoo, Qatar Airways, the Supreme Committee for Delivery & Legacy and Katara, this event returns after the huge success of the 1st Aspire Lake Festival, which was organised as a trial-run to gauge people’s interest last November.

The 2nd Aspire Lake Festival is set to take spectators through a half-hour ‘Magical Journey’. More than 40 talented artists and experts will come together for a showcase of theatrical performances and fireworks displays. The entire show will be directed by French fireworks art wizard and director Christophe Berthonneau.

Some of Berthonneau’s earlier work was displayed at the closing ceremony of the 1998 FIFA World Cup France™, the opening and closing ceremonies of the Athens 2004, Turin 2006, and the Rio 2016 Olympic and Paralympic Games, and the 2011 AFC Asian Cup in Qatar. He also played a part in the inaugurations of the Museum of Islamic Art in Doha 2008.

Commenting on the occasion, Ms. Kholoud Al Hail, Chairperson of the 2nd Aspire Lake Festival’s organising committee, said: “Qatar’s first-ever Aspire Lake Festival, which was held in November 2017, attracted more than 75,000 local and expatriate community members over three days. The event’s success has prompted AZF to turn the Aspire Lake Festival into an annual event on Qatar’s tourism and cultural agenda. As such, we decided to introduce another unique Lake Show this year. In 2018’s edition of the Festival, the artists will perform a magical story told through the art of fireworks. This event is testament to Aspire’s logistical capability to organising world-class sporting, entertainment and cultural events.

She added: “The first Aspire Lake Festival was a great learning experience. AZF has built on the feedback of the visitors, performers and organisers to ensure we host an even bigger and better event this time. This year’s event will be an entirely new and unique experience for visitors. We extend our thanks to this year’s partners for their support in making this another memorable event for us and the people in Qatar.” AZF will set up food and beverage stalls for visitors attending the Aspire Park during the two-days. The Aspire Lake Festival will run throughout the weekend, on Friday and Saturday, starting at 8:00 PM. More information about the event can be found at www.lifeinaspire.qa.