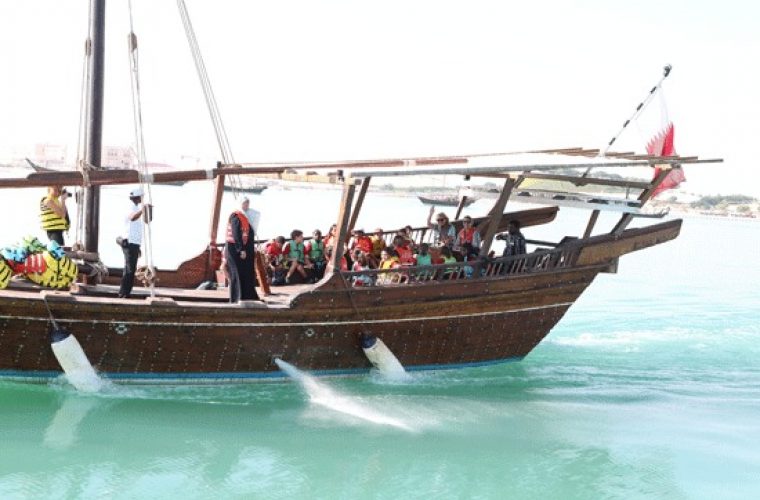 The fifth Traditional Dhow Festival in Katara is providing an opportunity for young people to know and appreciate the centuries-old maritime heritage Gulf states share.

Yesterday, students of 15 Independent and international schools were taken to 20-minute cruise rides to introduce them the Qatari maritime heritage. Two dhows have been designated by the festival to take visiting students on trips. As part of activities, the festival hosts a group of exhibitions and workshops related to handcrafts and folkloric trades that form part of the Gulf maritime heritage.

Some of these trades are Qallaf (boats and ships builder), Tawash (pearl trader), and making fishing nets and ropes, making Qaraqeer (fishing cages), and As-Sal (ship painting), in addition to repair shops that sell everything related to the sea.

Al Ghaithi booth from Oman shows how fishing nets are made, a traditional handicraft related to the Gulf maritime heritage.

The booth of Bakhaar Haji Ahmad from Indi, which is a ship and boat-building company operating for 130 years, displays models of ships and traditional dhows. The workshop had been making various types of dhows such as Al Bateel, Al Bum, Al Baghlah, Ashu’I and Asunbuook for Gulf merchants.

Meanwhile, the pearl-diving competition starts today and runs until Saturday. Two Saudi teams from Fursan and the Eastern Province will participate, along with teams from Kuwait, Bahrain, Qatar, and Oman’s Sur and Lushkhra.

Fishing, netting, rowing and traditional dhows race are among other competitions.