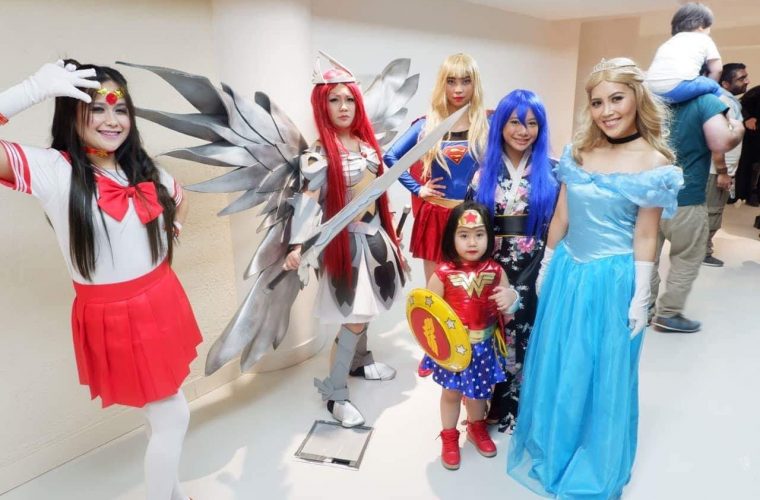 Cosplaying, as briefly described by Q Cosplay, is the art of dressing up as one's favorite cartoon, comic, movie, anime, or video game character to later on parade their usually-humongous costumes in public and have a great time with fellow geeks.

A contraction of the words costume and play, cosplay has become a popular hobby among teenagers and young adults in Japan and numerous other Asian countries. Producing a single costume to cosplay is also not as easy as it may sound as character suits vary greatly and can range from simple-themed clothing to highly-detailed costumes.

In Qatar, it's now possible to walk in your favorite characters' shoes as cosplay has long arrived in the country—thanks to the influence of its Southeast and East Asian expatriates community.

One organization which made cosplaying possible in the country is Q Cosplay, spearheaded by 21-year-old Abdulla. He said during an interview that they want cosplay to thrive in Qatar because despite the fact that they're not the first cosplayers in this part of the globe, their intention remains clean—to revive cosplay in a time when it's almost unfamiliar in the country, and to make it known to everyone that yes, there is this community here, and it's expanding steadily.

Q Cosplay has been doing their best to really reach out to Qatar' geek community by organizing cosplay events in malls and movie houses especially every time a new superhero film gets released in cinemas. They paraded in full-costume during some of the biggest opening days in Doha such as Thor: Ragnarok, Justice League, Avengers: Infinity War and the latest Star Wars film.

Their latest venture was the Cosplay competition held in Doha Festival City's (DFC) Vituocity—deemed as Qatar's first video game and e-sports capital—last Sunday (June 17) where more than 50 cosplayers converged under one roof to showcase what they've got. With various geeks and cosplay fanatics from all backgrounds making their way to the jam-packed DFC, every finalist was given 30 seconds to act, sing, dance, and perform just like the character that they're cosplaying.

In the end, Filipino cosplayer Franz Bryan Vicente (as Joker) emerged as first placer followed by Faher Bakri who played his nemesis Batman.

"Winning the competition means a lot to me as even on my tight schedule, I still find time for these kinds of things simply because I enjoy cosplaying. Also, my wife's overflowing support helped a lot for me to win the title. I'm dedicating my victory to her and to our daughter and son," says first-placer Franz who also drew the most cheers from the mostly-kids audience at DFC.

Another cosplayer, Sultan Al Khatib, said that winning doesn't really matter as long as you're doing what you love. "I always wanted to cosplay since I was a little kid. When I discovered Q Cosplay on Facebook two years ago, that's when my passion for dressing up as someone else began. I cosplayed as Pennywise, Deadpool, and as you can see, The Mask this time."

When asked about the restrictions that his group needs to follow when performing, Abdulla said that Q Cosplay ensures to be wholesome all the time, especially having children as their main following. "As a Muslim, I apply the same discipline when it comes to the characters that I'm portraying. Also, I believe that there are several amazing Muslim cosplayers out there, so as one of them, I aspire to be a positive example and role model."

He also noted that Q Cosplay members are choosing characters to cosplay not just because they like them but because these characters embody a certain legacy—justice for Batman for example.

Q Cosplay is set to hold their next cosplay gig this Thursday (June 21) in a Meet & Greet event at Urban Jazz Cafe at The Pearl. Exclusive Q Cosplay shirts will be given away and you're free to come in costume so don't miss the chance to meet and take a selfie with your favorite cosplayers in Qatar!

To know more about Q Cosplay, check out their contact details below!

Have you tried cosplaying in Qatar? What was the experience like for you? And are you planning to parade in costume again? Drop us a line in the comments below and also, don't forget to like and share this article—it keeps us going!