5 ways you can celebrate culture at the 2017 Qatar British Festival! 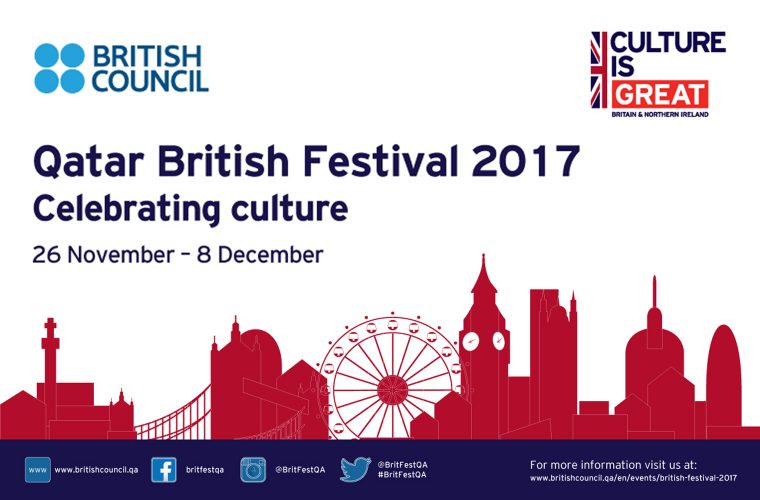 We’ve been marking our calendars ever since the British Council Qatar announced the return of the Qatar British Festival! One of the country’s most-anticipated cultural events, this two-week-long celebration promises a host of activities open to the public that highlight collaborations and influences that Qatar and Britain have shared with each other – and, this year, there’s a particular emphasis on activities for young people!

Here are 5 ways you and your family can make the most of the Festival:

In partnership with Qatar University and University College London Qatar, this imaginative architectural display showcases the Doha Unlimited Design Award 2016 prize-winning team’s vision of transformation in old Doha. The prize, awarded by the British Council Qatar, saw UK- and Gulf-based designers partake in a one-week design residency under the theme of ‘The Open City’, with a focus on mobility and improving the experience of movement in Doha to make it more open and accessible to all.

Yes, the British Festival is collaborating with Ajyal! How cool is that? In partnership with the Doha Film Institute, come out and enjoy family-friendly short and feature-length films that run the spectrum from animation, to documentaries, fiction, and even works made right here in Qatar! Complementing the public screenings is the Ajyal Competition, and young film judges from the UK and around the world have been invited to sit on the jury to select the winning film! Want to know the full Ajyal line-up and lock down your tickets to the screenings? Click here!

We’re super-excited for this family-friendly festival highlight! Kids and adults alike will have fun winding their way through an interactive ‘Culture Maze’ that represents the streets of old Doha, exploring and learning about their city along the way! Along the way as they get ‘lost’ in the maze, children will be able to express and design their dream spaces throughout – and even create their own collage of the existing streets of Doha. Now that’s ajeeb! For a full schedule of timings click here!

It wouldn’t be a British festival without a spot of high-tea! And every day throughout the 2017 Qatar British Festival you can indulge in the Tea Time Series hosted by the Shangri-La Hotel, Doha, and find out more about all the events taking place throughout the course of the festival while enjoying a cuppa and some fresh scones! Want to book your spot? Call 4429-5000, or email [email protected]

The Planets and Other Music from Britain

Capping off two weeks of the best of Britain is the British Festival Finale closing concert, featuring iconic British conductor James Shearman. Involved in more than 70 film scores, Shearman will be in Doha to conduct the Qatar Philharmonic Orchestra at the closing event of the Qatar British Festival 2017. Highlights will include The Planets, and other music from Britain such as James Bond 007, music from Independence Day, and The Bridge on River Kwai. Also making its world premiere at the event will be the latest composition from Qatari composer Dana Alfardan. Grab your tickets here before they’re gone!

Okay, okay…we just had to give you one more festival nugget to enjoy!

6. ‘Jingle All The Way’ – a concert by the Doha Singers

Get yourself in a festive mood with a special holiday concert of all your favourite hits performed by the Doha Singers! Tickets for this merry event can be found here.

Oh okay, and just one more!

Think you can make a great short film using your smartphone or tablet? Then take part in the first ever edition of Small Screen, Big Film, a film competition and festival for budding filmmakers in the Gulf and the UK.

They're offering budding filmmakers across the Gulf, and Gulf nationals living in the UK, a chance to showcase their work to thousands of people online.

If you’ve got a big idea, all you need to do is create a short film under three minutes and submit your entry to our team using the webform found here!

Excited about this news? Tell your friends by taking part in the conversation using the hashtag #keepitshort or #خليهاقصيرة.

Are you looking forward to the Qatar British Festival 2017? Drop us a line in the comments below and tell us which events you’ll attend! Also, don’t forget to like and share this article!