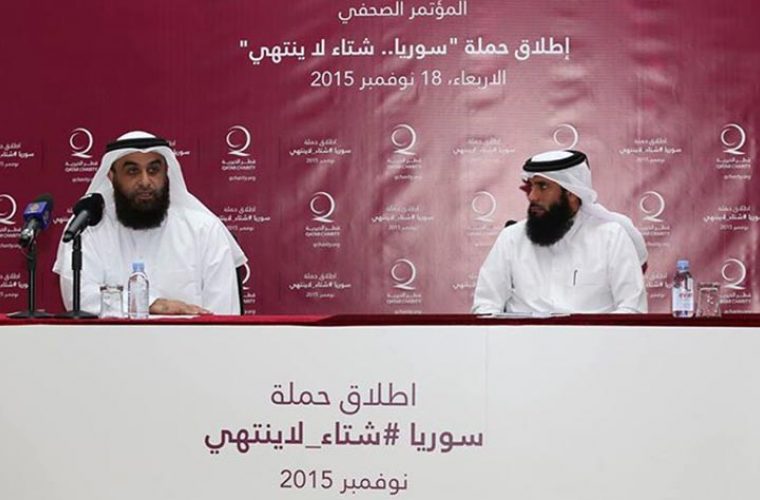 Qatar Charity (QC) inaugurated 'Syria: Endless Winter' campaign to help face the cold of winter. The campaign's main goal is to provide winter supplies needed for the Syrians living inside Syria and the refugees in the neighboring countries. It seeks to collect around QR 54,000,000 for the benefit of 735,000 people. After the weather forecast had anticipated that this winter is going to be harsher and colder, QC made sure to inaugurate this campaign so as to hurry and help the Syrians, a QC press statement said today. The statement added QC encouraged the philanthropists and good-doers of Qatar and those residing there to offer a helping hand to the displaced and refugees to alleviate their expected sufferings because of winter. The campaign calls for the people to support the campaign’s products whose prices vary QR 50 – QR 1,000. "The campaign's products include: ‘Winter Banquet for Family of 4’ at a cost of QR 1,000. It comprises a blanket, a heater, jackets, hats, gloves, socks, and scarves; A ‘Blanket’ at a cost of QR 100; a ‘Heater’ at a cost of QR 250; a ‘Winter Bag for Two at a cost of QR 400 which includes hats, gloves, socks, and scarves; a ‘Food Basket’ that is sufficient for a family for one month (it has the basic supplies) at a cost of QR 200; a ‘School Bag’ at a cost of QR 100; and bread sufficient for a month for one family at a cost of QR 50." QC's CEO Youssef Al Kwairi said, "Winter is making the Syrian situation worse. Recently, the number of displaced Syrians and refugees has increased. We have to hurry and help them. I encourage the philanthropists and good doers of Qatar and the people residing there to stand side by side with the Syrians." He highlighted the importance of having to meet the Syrians' needs by providing them with supplies that would make them and their children feel warm. He pointed out how QC had already offered similar aids in previous seasons when snowy weather and howling storms were at their worst.

QC was one of the very first to aid the Syrian people. It has a trained team and a specialized management to respond to catastrophes. The number of people who benefited from its aids since 2011 is 6,083,617 affected-people in the fields of food, shelter, health and education, which were implemented at a cost of QR 322,000,000. According to the 2014 report of FTS of OCHA, QC received the first rank across universal NGOs for the number of aid projects it had implemented for the benefit of the Syrian people.
128,619 benefited from ‘Syria Winter’ campaign implemented at a cost of QR 10,000,000 by QC last winter in a number of Syrian governorates and for refugees in Lebanon and Turkey. The beneficiaries received tents, blankets, mattresses, fuel, heaters, children clothes, supplies and milk for the children and family.
By the end of last month, QC had organized a conference entitled "The Syrian Humanitarian Crisis Conference". 50 different international, regional, Arabic, and Syrian humanitarian organizations attended. The conference focused on bringing the humanitarian organizations interested in the Syrian situation together so as to cooperate and coordinate together. The main purpose of the conference was to best face the deteriorating circumstances of the displaced Syrians and refugees; especially that winter's already started.
The attendants pledged to implement a number of projects at a cost of QR 144,000,000. QC announced setting aside QR 100,000,000 from that amount to the Syrian people starting from 2016. In addition, QC announced paying 30% of any project budget intended to serve the Syrians in winter according to the society's mechanisms for cooperation and association.
Source:
http://www.qna.org.qa/en-us/News/15111813590056/Qatar-Charity-Launches-Syria-Endless-Winter-Campaign