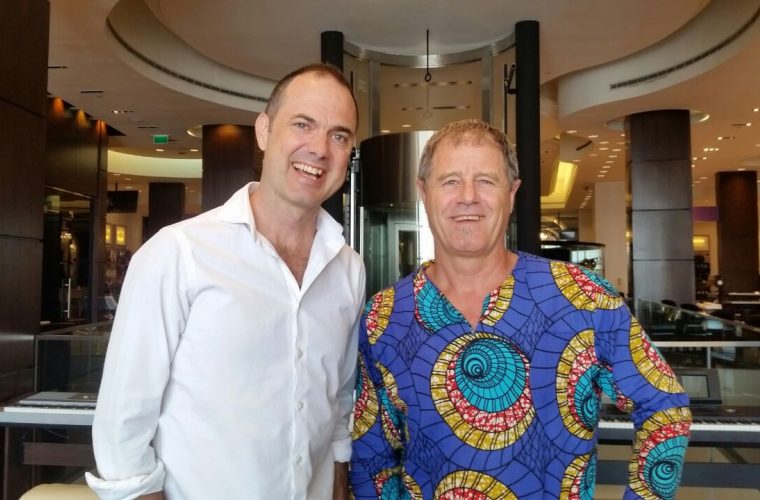 For Mike Pignéguy and Patrick Dilley, music is a language – universal and diverse at once. A language that gives opportunities for shared experiences and expressions, and one that has many dialects that reflect our shared cultures, societies, languages, and tribes. Musicians and music advocates both, Pignéguy and Dilley are the driving force behind the upcoming Rhythm Explosion concert – the second edition of which is taking place on Friday, April 28, 2017 at the Sherborne Qatar School.

ILQ sat down with them to learn more about their work with Rhythm Explosion, what concert-goers can look forward to on Friday and, how to get involved with their music!

ILQ: Tell us a little about your musical background and what brought you to Qatar.

MP: I’m Australian by birth, but grew up in New Zealand. Jazz is my background – that’s what I was trained in. My first instrument was the piano, but I’m a drummer, composer, arranger and producer. Education is a big part of what I do in Qatar, so I want to foster interesting music and create good practice. One of my projects is The Awakenings Ensemble, which brings together both world influences, jazz, and music technology. I’ve been in Qatar since 2010; my wife and I came because the Qatar Music Academy was opening, and she’s the head of Western music there, and I’ve taught a range of things like percussion, composition, and jazz.

PD: I’m from South Africa, born and bred. I’m pretty much a self-taught drummer in marching bands, Scottish bands, navy bands etc. At the age of 25 I went to London to study fusion drumming at Drum Tech. Interestingly, because of the apartheid system, we weren’t really exposed to African music; so for the first time in Birmingham I came across a djembe - an African drum, and became very inspired.

I came back to Africa when the borders opened, and have travelled through West Africa quite a lot. I’ve been to places like the Ghana National Theater – there I studied with various groups in Ghana, around Accra and Teshie. I brought back people from different African countries to South Africa for the Team Spirit band, which was formed to promote African music and more traditional styles. Since then, I’ve travelled a bit and met Mike here in Qatar, who invited me to do the Rhythm Explosion – which I’m very excited about! I also have my own project called Drumming Qatar to bring together people from all around.

ILQ: So what is Rhythm Explosion all about?

MP: Rhythm Explosion combines elements of music education, and what makes it unique is that it brings together professional musicians and students. Last year was the first one, which came about after I worked with students from the American School of Doha (ASD), which has a great music program – I’ve composed a number of things for them. Another interest of mine is Oriental and Arabesque rhythms, so combining the two informed the beginning of Rhythm Explosion.

Last year, [for the concert], we had a special guest from Italy called Israel Varela, and the project was only centred around one school. It worked very well, but this year there’s a greater diversity of students and professional musicians. The profits went to a scholarship endorsed by ASD, and this year Sherborne Qatar nominated Reach Out To Asia (ROTA) [as their charitable partner]. We’ve also got Richard Johnson, a jazz musician from Jazz at Lincoln Center joining us. One of the things that’s also special about Rhythm Explosion is [its] use of multiple drum-sets – because one just isn’t enough!

PD: It’s also about exposure for the students, and an opportunity to perform. Mike is bringing a lot of professional musicians that students can perform with. As a professional drumming teacher, I’ve got my Drumming Qatar adult students joining, and for them it’s a fantastic opportunity to perform in front of so many people after 10 weeks of training. I hope this will inspire people to partake in the future. It’s about inspiring people really, and building their self-esteem.

ILQ: Who can take part in the Rhythm Explosion, and how can people get involved?

MP: There are a number of different schools represented in the Rhythm Explosion, with students from ASD, the International School of London Qatar (ISLQ), the Sherborne, Qatar School, and Doha College – plus individual students of mine. Professionals I have brought in from both within and outside of Qatar.

PD: From my side, there’s the Drumming Qatar students, two semi-professional drummers, and some ISLQ students. We might also have a professional singer coming to join us. It’s a showcase of African music, we want to show that it’s not so difficult to learn and play something as a beginner. I have a lot of female students that learn very quickly and are very confident in their drumming.

ILQ: Who are you trying to reach with your concert this Friday?

MP: We’re trying to reach a largecross-section of Qatari society. In a way, the show will be similar to variety concerts with something for everyone .The mentoring aspect is important, and showcasing the diversity in Qatar not only for the spectators, but also for those performing as well.

Another thing that I think is important as a teacher is to avoid saying, ‘That’s not right’. Giving guidance without being too controlling, and allowing the doors to be open can be an important part of teaching. Sometimes I’m able to observe my students when they practice or play around with the instruments outside of classes. I often notice small adaptations or interpretations of pieces and ways of playing by students who are in the process of learning. That’s really nice because I can compose new works around these changes and interpretations. I think that this shows that anyone can start on an instrument and begin toexpress themselves through music.

PD: I think this is what creates good musicians. Learning something, manipulating that sound, and figuring out what sounds good and what works. For me, what it’s about in a nutshell is creating awareness, inspiring people, and showing a percussive diversity.

[With this concert], I think we want to inspire other students, kids, parents, friends, and siblings. If they can see what the students have accomplished, they might want to try this themselves and try out for Rhythm Explosion. At a [one of our] Trinity College London Music Exams last year, a Qatari man walked in with his daughter who wore abaya, and they said they were here to try out for the rock and punk examinations in drum-kits. She ended up trying out for not only one, but two levels – which is very impressive. Music crosses all boundaries…there are no boundaries in music – it’s a universal tune of communication.

ILQ: You describe music as a language – can you explain what you mean by this?

MP: It links to the wider understanding of literacy and improvisation. If you bring people up on-stage, you have to see what they know and how you can use it. In order for me to be able to communicate with them in a dynamic way, its not about words, but about a mutual understanding and reading each other. If you think about improvisation, you’ve got to have vocabulary, context, knowledge of style, and facility – the ability to apply knowledge. Communicating in Qatar can be quite narrow, if your first language is not English [or Arabic]. So musiccan offer an opportunity to create a mutual deep language to converse with.

PD: Mike has a more academic perspective, but from my perspective it’s a lot more simple. At drum circles I observe how people interact before and after playing in the drum circle. After the drum circle, usually at sun-down, I do a motivational talk where I gather everyone, talk to them, and do greetings with them in an African language. I help break down barriers between cultures, put everyone in the middle, and everyone greets someone they don’t know. After the event, we don’t have individuals anymore but a community. Here, music is a simple way to communicate and connect people. I want to break down cultural, religious, and language barriers. For me, music is a universal language.

ILQ: So you think that by bringing these people together to play music, a shared language is created?

PD: Yes, I really think so! If I get together two people and each of them plays one rhythm, how many rhythms are there? Not one, not two, but three actually. Since the first one plays one rhythm, the other plays a second, and together a third one is created. You call this an inside rhythm.

ILQ: So what else is on your musical agendas for 2017?

PD: Things usually slow down during Ramadan and the summer, so for me this is a time for travel. To find new things and bring them back to Qatar. For the rest of the year I really work on increasing awareness. Creating awareness is something that comes through running public drum circles, engaging with schools, speaking to individuals, and through lifestyle

MP: I’ve got a few things going on in 2017! I’ll be playing in Malaysia next week with The Awakenings Ensemble, and then in Australia later in May with my quartet. I often travel by myself to different places and work with different local musicians which can be very rewarding.

I’ve [also] got a drum app coming out which I'm very excited about. It’s created using the software on Mac, so it can combine videos, sound, and text. It’s about providing different ways of learning and experimenting for students in their first year. It gives students a chance to approach music in a variety of ways – for example aurally and visually, as well as using traditional notation.People observe and absorb things in different ways, and I think music is no different. I believe it can be very powerful having different options in the way you connect with new ideas.

ILQ: What’s your overall message to the ILQ community its young artists out there?

PD: Come to Rhythm Explosion! [Laughs] Rhythm Explosion can create that awareness that anyone can do this and can find enjoyment in music! Also you will get to interact with students and musicians from different schools!

MP: If you have the opportunity to experiment with music or learn an instrument, you should go for it. Think of it as a craft and develop it – it's something that can bring you and others a lot of joy!

Want to know more about the Rhythm Explosion? Find them on Facebook, on their website, and buy your tickets here!

If you took part in last year’s Rhythm Explosion – or you’re taking part in this Friday’s concert, why don’t you share your experience with us in the comments below! Remember – everyone has the ability to learn something new and perform with amazing musicians! Also, don’t forget to give us a like and a share – it keeps us going!