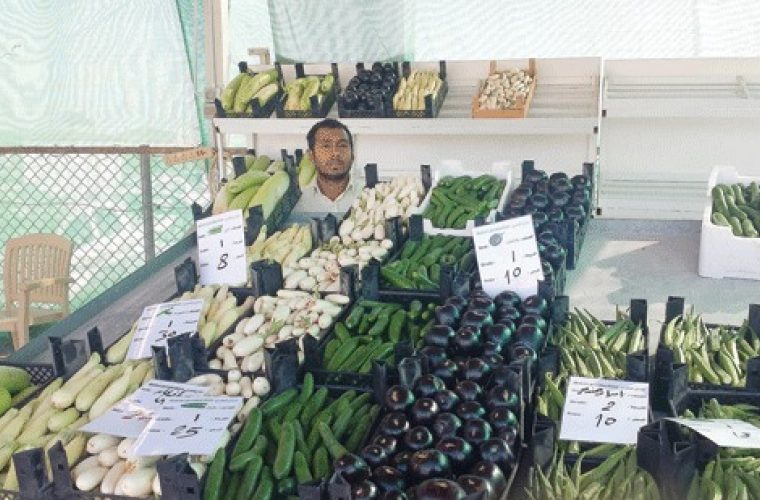 Farmers participating in the markets have reported an increase in production this year which is expected to reflect positively on the prices. The harvest season began last month and continues until May-end.

A variety of fresh vegetables from local farms are offered at attractive prices. Launched three years ago, the annual markets allows farmers to sell produce directly to customers without intervention of middlemen.

There is a separate section for imported fruits and some vegetables like onion and potato. The markets function on Thursdays, Fridays and Saturdays from 7am to 5pm and will remain open until June.

Some farmers at Al Mazroua yard told this daily yesterday that they had cultivated more land this year and expected the produce to double compared to last year.

A 4kg box of cucumber was available at QR13, a 7kg box of bigger cucumber at QR25 and a smaller variety at QR16.

Many, including women and children, were seen buying fresh vegetables and fruits in large quantities. Porters were on hand to assist customers to carry goods in handcarts to their vehicles in parking areas.

“We expect more customers in the days to come and farm produce will also increase gradually with the onset of winter,” said Abdurrahman Al Sulaiti, Supervisor General of Al Mazroua Yard.

All vegetables have started coming from open farms except cucumber still being produced in greenhouses due to the warm weather. “Harvest at open farms began a month ago. We used seeds by the beginning of September,” said Mohammad Iqbal, a Bangladeshi salesman at an outlet of a farm in Semaisma.

The farm produces some 350 boxes of vegetables of different types every two or three days. During peak season, output is expected to reach 2,000 boxes per day, he added.

“So far, the produce from our farm amounts to 200 boxes in three days,” said Ahmad Khan, a Pakistani working with a farm in Umm Al Amad.

“We have a big farm whose production reached about 4,000 boxes per day during main season last year. We have added about 50 percent additional land for cultivation. So we expect the output to double this year.”

But he expressed concern over the possibility of a sharp decline in prices as it happened last year resulting in reduced profits for farm owners.

“Last year, I sold a box of 5kg tomato at QR3. One day I offered one box free to those buying two,” said Khan.

Four outlets for fish are also available at Al Mazrouh. Widam company has set up its outlet selling live animals and meat.

Farms breeding hens and ducks have also set up stalls in a separate building behind the vegetable market.

Authorities have put a cap on prices but traders have been allowed to sell produce at prices lower than those on the daily price list issued by the Ministry of Business and Commerce.