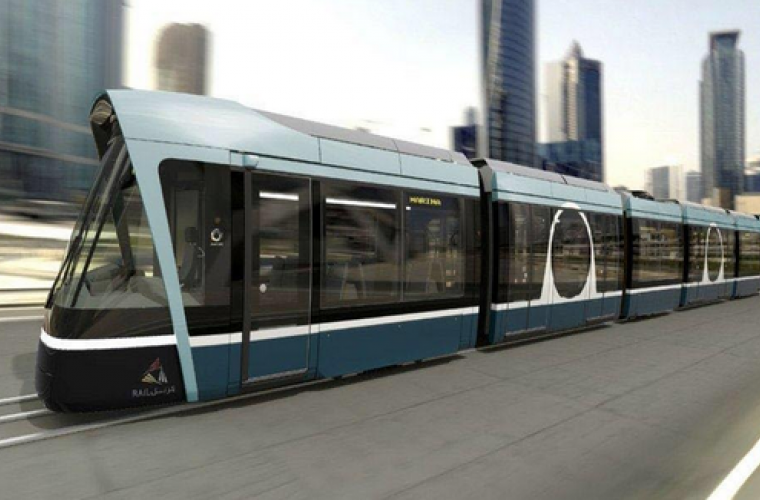 Qatar Railways Company (Qatar Rail) marks another milestone with the unveiling of the Doha Metro and Lusail Tram designs. The disclosure of the exterior designs of the upcoming railway vehicles, ‘Al Faras’ for the Doha Metro and ‘Al Mehmel’ for the Lusail tram will give the public a glimpse of what the new systems will look like when they open in 2020.

The Doha Metro and Lusail Tram project designs combine Qatari heritage and culture with modern technology. A symbol of intelligence and speed, ‘Al Faras’ – a name given to the Arabian Mare – has inspired the design of the Doha Metro driverless trains and their dynamic shape. Since ancient times, Mares have been prized in Qatari culture. Whether for war or for racing, they were preferred over colts or stallions since they are more disciplined and easier to control.

This relates to the nature of Doha Metro as one of the fastest driverless trains in the world and the fastest in the region travelling at 100km/hr. The mare’s intelligence relates to the advanced technology used in driverless trains. The dynamic shape of the Arabian Mare served as inspiration for the front end of the vehicle and its lines define a shape that is powerful yet slender and elegant. The design is custom made for the Doha Metro project and the shape of the windows resembles the eyes of the mare. . The interior is inspired by the progressive architecture present in Doha skyline, combining traditional and modern elements.

Equally sophisticated, “Al Mehmel”, which signifies “Al Dhow” – the old traditional Qatari boat used for pearl fishing – served as the main inspiration for the Lusail Tram design. The design concept focused on the sea representing dhow pearl fishing and bringing in the calm, cool, elegant and tranquil elements of that medium to the design. All these features will be depicted in the design of the trams.

Commenting on the unveiling, Eng. Abdulla Al Subaie, Qatar Rail’s Managing Director said: “Across our projects, our build and design stages have been guided by the powerful coming together of tradition with modernity. Deeply entrenched in Qatari culture and heritage, the Lusail Tram and Doha Metro designs celebrate the convergence of our country’s history with groundbreaking technologies and cutting-edge solutions., We are creating a seamless consumer journey and experience built around the local community’s needs and values.”

Twinned with the train designs is a world-class combination of technologies and solutions that will deliver the ultimate commuter experience powered by two international partnerships.

The first, with a consortium led by Mitsubishi Heavy Industries, was signed for a systems package for the Doha Metro. One of the world’s largest projects for a single metro system, the partnership delivers integrated, groundbreaking and automated operations for the Doha Metro – including power, ventilation and a highly advanced railway signaling system – and ultimate passenger comfort.

Mr. Thierry Boussillon, Deputy Programme Director of the Mitsubishi Heavy Industries said, “We are delighted to supply the Doha Metro System to Qatar Rail. The Rolling Stock Al Faras design was borne through close coordination with Qatar Rail and our aesthetic design team. It combines the most modern technology with a unique yet elegant shape, and Qatari culture and heritage.”

Future commuters will enjoy a smart, driverless experience equipped with advanced safety and security controls, intelligent air conditioning and spacious seating. In total, 75 trains – consisting of 3 cars, one of which will be for Gold and Family Class and two for Standard class – will be delivered to Doha Metro: Gold will have 16 seats, family 26 seats and standard 88 seats. The metro trains are designed and manufactured by the Kinki Sharyo Co. Ltd. at their factory in Osaka, Japan.

The second partnership, a consortium led by Alstom and QDVC, will deliver a fully integrated Lusail tramway system, including 28 Citadis tramways, power supply equipment, signaling and track works. The tram’s full low-floor Citadis will offer high-end passenger comfort and are designed for extreme weather conditions. Powered by a safe power supply model, the Lusail tram project will employ mechanized track laying technology, which has been proven in 7 cities worldwide for reducing the track installation period by four times.

“There are currently more than 1,800 Alstom light rail vehicles in operation throughout the world. Each Citadis has its own specific design and is customized to reflect its city’s image and culture. We are very happy to have partnered with Qatar Rail to come up with a unique design that will certainly please the passengers and residents of Lusail,” said Gian Luca Erbacci, Senior Vice President Middle East & Africa, Alstom.

Also commenting on the occasion, Eng. Saad Ahmed Al Muhannadi, CEO of Qatar Rail, shared the progress of the design and construction works across both the Doha Metro and Lusail projects saying, “The official unveiling of the Doha Metro and Lusail Tram designs is an occasion for us to look at how close we’ve come to bringing our vision to life. This new milestone is an opportunity for us to bring the progress of our projects back to the future of transport in Qatar; one that is designed and built to world-class standards of modernity and innovation but, most importantly, that remains deeply rooted in our country’s history and community.”

Advancing at full speed, the Doha Metro progress reports an 89% completion rate of tunneling works (99km out of 111km of tunnels), as of 1st week of April. More than 112 million man hours have been invested in the project with the support of over 32,000 workers, underpinned by rigorous safety and security processes.

Similarly, the Lusail Light Rail Transit is underway with 35% of the construction works completed to date.

Qatar Rail was established in 2011 to deliver an outstanding integrated public rail transport system and provide high quality service to citizens and residents. The Doha Metro will form the backbone for the integrated public transport system, supported by other rail–based systems like Lusail Tram, a city-wide bus network and dedicated feeder bus services to increase the public transport catchment and services. To meet the demands for an integrate comprehensive transportation system for the country, Qatar Rail’s focus is to achieve an incorporated multimodal transportation system that complements economic growth and improves people’s quality of life by bringing in world-class and state-of-the-art transportation systems and infrastructure.