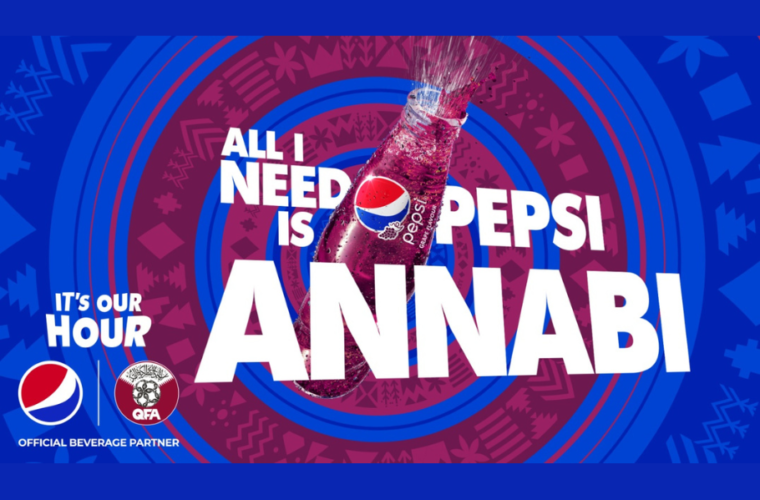 As part of its long-standing commitment to connect people from all over the world through their passion for football – PepsiCo, one of the region’s largest food and beverage company, unveiled new football-themed consumer engagement opportunities allowing fans to indulge further in their passion: limited-edition grape-flavored Pepsi in Qatari national colors and Pepsi soft drink can designs with faces of supporters draped in national colors.

PepsiCo’s latest initiatives celebrate fans’ true identities and dial up their national pride while allowing them to enjoy one of the most popular sports on earth.

“What happens outside the field has become just as important to the build-up and excitement as what happens on it. To celebrate local pride with supporters here in Qatar, we are launching across stores an innovative new Pepsi Annabi grape cola in the Qatari national team’s colors, with whom we are partnered as ‘Official Beverage Partner’. We are also launching Pepsi soft drink can designs with faces of fans draped in the national colours of Qatar and other countries – encouraging them to stay thirsty for more personalized cheers, more celebrations, more Pepsi.”

As the Official Beverage Partner, PepsiCo last week announced that its brands, Aquafina and Gatorade, will support the Qatar National Football team and Qatar National Under-23 Football team players every day with the latest innovation in sports and hydration – providing them with refreshing beverages to maintain performance and aid recovery, both on and off the field.

Tapping into the exhilaration of the sport, the devotion of the QFA fans, and the momentous glamour of the game – Pepsi turned its iconic drink into the Qatar team’s colors and introduced a new ‘Grape’ flavor, offering consumers in Qatar a thrilling burst of grape flavor with a sweet, crisp taste. The all-new product innovation – Pepsi Annabi – was launched alongside the release of a Pepsi Annabi brand-led video featuring the Qatari footballers.

Further, stores nationwide are also stocking Pepsi soft drink cans – innovative in look and feel – with faces of fans draped in a variety of national colors, allowing fans to personalize their celebrations for a limited time and cheer for their most beloved teams.

PepsiCo – through the years – has a history of supporting sports and being an active participant in celebrations through various marketing initiatives at world sporting events for hockey, basketball, cricket, American football, etc. Through the latest limited-edition cans, grape-flavored cola, and existing range of refreshing effervescent beverages and crunchy flavor-packed snacks, the company has cultivated a legacy of celebrating sports throughout the region and globally.