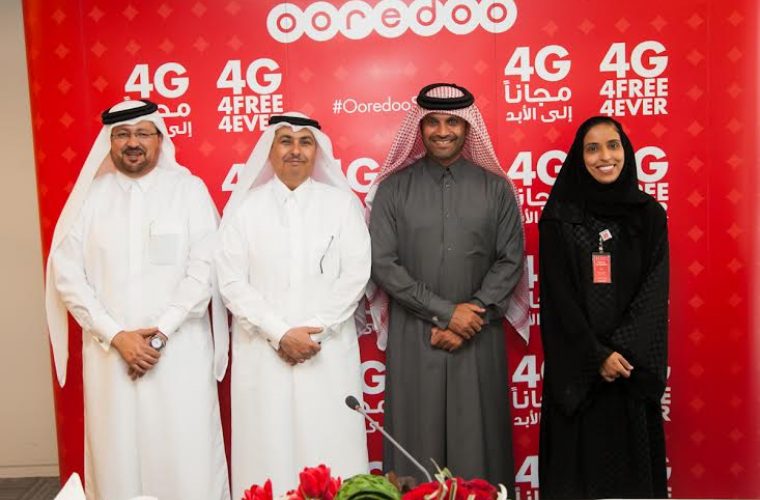 Ooredoo Qatar’s Chief Operating announced today that the Ooredoo 4G network would become permanently free to all Ooredoo customers, during a press conference held in the company’s headquarters.

Waleed Al-Sayed said that the 4G Key, which usually costs Ooredoo customers QR 60 per month for Shahry and QR15 per week for Hala, would be free for all Shahry pack customers and Hala Mobile Internet or Broadband Pack customers as part of Ooredoo’s 2014 ‘Year of Digital’ campaign.

The campaign will include major updates for Shahry and Hala customers, including revamped mobile data packs, as Ooredoo continues to cater for the number of growing smartphone users in Qatar with their upcoming #OoredooSmart campaign.

Al-Sayed said: “Last year we launched Qatar’s fastest-ever 4G network, connected more than 100,000 customers to Ooredoo Fibre to homes, launched Business Fibre and drove innovation with our Ooredoo App. So this year, in celebration of our customers who helped us achieve all of this, we’re making 4G free to say thank you for your support and to kick off #OoredooSmart”

The 4G network is available now for prepaid Hala Mobile Internet or Broadband Pack customers and all postpaid Shahry customers. To access the 4G key on mobile and smartphone devices, Hala customers should SMS the keyword ‘4G’ for free to 121. Shahry customers can send ‘4G’ to 114.

Ooredoo asks customers to ensure their phones are 4G enabled before activating the 4G key. Customers can find out if they have a 4G ready phone by going to www.ooredoo.qa/en/4G-devices.

The Year of Digital campaign will also include a push toward a more independent and self-sufficient customer service, including updates to the Ooredoo app, self-service machines, social media and the Ooredoo 111 Customer Care line.

Ooredoo’s Mobile Money service will also see improvements, as the company invests in ensuring the benefits of Mobile Money – including low rate international money transfers and the ability to pay staff directly – are as accessible as they can be.

Ooredoo’s Mobile Money service has had tens of thousands of financial transfers since its launch and Ooredoo plan to continue to explore and update this amazing resource in 2014 for the people of Qatar.

The Year of Digital will also see Ooredoo improve its business security services. Ooredoo, who are currently the only company in Qatar to offer a Distributed Denial of Service (DDoS) service, plan to invest in researching the threat of cyber attacks to protect businesses.

In the coming weeks, Ooredoo will continue to enhance and update their services to suit their growing customers’ needs. The company has confirmed it will be actively participating in the Mobile World Congress in Barcelona on 24-27 February, during which it will be announcing another major milestone for the company.

For complete details about Ooredoo’s 4G services, customers can visit the 4G page on the Ooredoo website at www.ooredoo.qa.