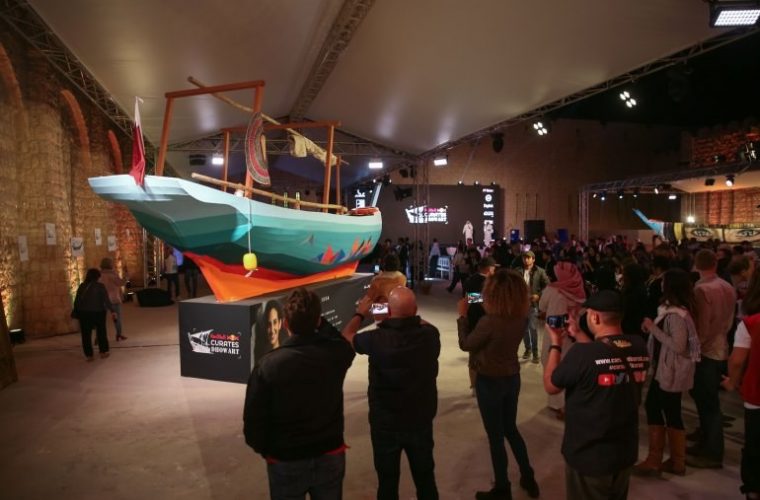 The journey of Red Bull Curates: Dhow Art has come to an end with the unveiling of the 6 dhows on December 14.

The project welcomed a selection of Qatar’s promising as well as established talents to express art on an untraditional canvas, the dhow. Led by curator Khalifa Al Obaidly, Director of Doha Fire Station, these artists were chosen to turn their inspirational designs into a reality.

Art and creativity enthusiasts gathered to witness the 6 real life-sized dhows as they were finally revealed, portraying the artists’ inspiring imagery. In celebration of culture and arts, the presentation also featured several local and international performances throughout the evening.

Sheikha Alanood welcomed everyone and congratulated the artists who worked hard to bring these dhows into life. “We are very excited about such an initiative by Red Bull that falls in line with the Sheikh Faisal bin Qassim Al Thani Museum’s vision of creating a community for artists,” Sheikha Stated.

Ambassador Willy Kempel expressed his support for the initiative and the art scene in Qatar, saying: “Red Bull Curates Dhow Art is a wonderful project.” He also announced the wall art project at Sheikh Faisal bin Qassim Al Thani Museum and taking part in it as a curator.

Commenting on his appreciation of the project, Director of the museum, Kees Wieringa stated, “When the idea initially came through from Red Bull, I heard of art, culture and heritage separately. But looking at the dhows now, I see contemporary art that speaks of heritage displayed at the museum. It all fits together perfectly”.

Through the six dhows, Mubarak Al Malik depicted the dramatic farewell of a sailor and his family, while Muna Al Bader’s captured the joyful scenery of traditional Qatari weddings. Fatima Al Naimi told the tale of a dhow’s suspenseful journey as Fahad Al Maadheed brought together the symbolic horse and camel.

“I knew we we’re going to surprise the entire scene. There’s a lot in store for everybody, not just art enthusiasts. This has been a new experience, taking the application of art to new heights. Turning the dhow into a canvas, that’s something nobody could have imagined!”, explained Dhow Art’s curator, Khalifa Al Obaidly.