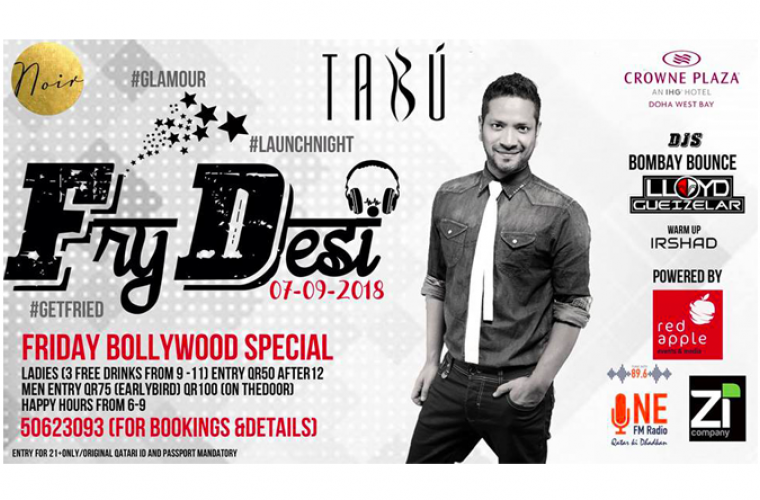 Tabu at Noir in Crowne Plaza The West Bay is the brand new destination for clubbers in Doha. Located right in west bay..and every Friday we get you FRIED with some Desi tunes with the legendary disc jockeys from India

THE LAUNCH NIGHT ON SEPTEMBER 7TH WILL FEATURE THE LEGEND WHO MADE INDIA PROUD WORLDWIDE. The man BEHIND BOMBAY BOUNCE.. DJ LLOYD..
Lloyd's presence in the music & programming industry spans more than two decades. His sense of audience trends in music both globally and locally combined with his business acumen has made him successful in the music & entertainment industry.

A veteran in the music & programming industry, Lloyd Gueizelar popularly known as DJ Lloyd-The Bombay Bounce has left no genre unexplored. With his varied experience ranging from hip-hop, psychedelic, house and various genres of electronica, Lloyd has found his pursuit in what Indians are most passionate & proud of i.e. BOLLYWOOD.
DJ Lloyd is the only Indian DJ to have several international accomplishments to his credit. Lloyd was specially invited to represent India in the DMC World DJ Mixing CHampionship for 2 years consecutively; Paris in 1998 and New York in 1999. Winning the 1st runners up position two years in a row; laid the foundation to his successful international stints. He is the only Indian DJ to have collaborated with popular international artistes such as Nichole Scherzinger, Britney Spears. He has also collaborated with A.R. Rehman & few others in India.

Current Status
Lloyd is currently on the advisory panel and the official DJ & Music Producer for BollyBoom - a Bollywood Electronic Festival property by Percept Live, India. He also features on BBC Asia - London Radio where he has a segment every Monday.

International Performances
Lloyd has worked with Nicole Scherzinger for her track "Right There" and with Britney Spears for her track "I Wanna Go". His portfolio includes touring and opening performances for music legends like Def Leppard, Gypsy Kings, UB40, Diana King and Will Smith. Opening DJ sets alongside international DJ stalwarts like Paul Van Dyk, Nick Warren, Mylo, Tall Paul, Judge Jules and Antoine Clamaran makes him one of the most versatile DJs on the dance music circuit.

Clubs
Voted India's #1 Bollywood DJ, Lloyd has mastered the art of perfectly blending Bollywood with electronica which makes him extremely popular with the regular clubbers. Having worked with some of the best clubs in India, Lloyd's expertise does not end at programming and music. He understands the finer nuances of his trade and what is needed to make a club popular. He is currently consulting with some of the most celebrated clubs in India under "The Bombay Bounce" brand name.

Major Bollywood Events
DJ Lloyd has worked and collaborated with some of Bollywood’s most respected singers and music directors of our era.
Having been a part of Star Plus’s popular TV show ‘Amul Music Ka Maha Muqabla’ which was aired on Worldwide Television for a span of 3 months, where he shared the stage with musical icons viz, Shankar Mahadevan, Himesh Reshamiya, Shreya Goshal, Mohit Chauhan, Shaan and Mika Singh amongst many others, has etched his name in the minds of Indian’s globally. His unconventional approach and style as a Bollywood DJ is what sets him apart from the rest.

DJ LLOYD will bring with him 3 decades of DJing experience from around the globe to DOHA on the launch night of FRY- DESI.. Its glamorous..so dress up..

*NO MEMBERSHIP REQUIRED
*COUPLES AND MIXED GROUPS GIVEN PRIORITY