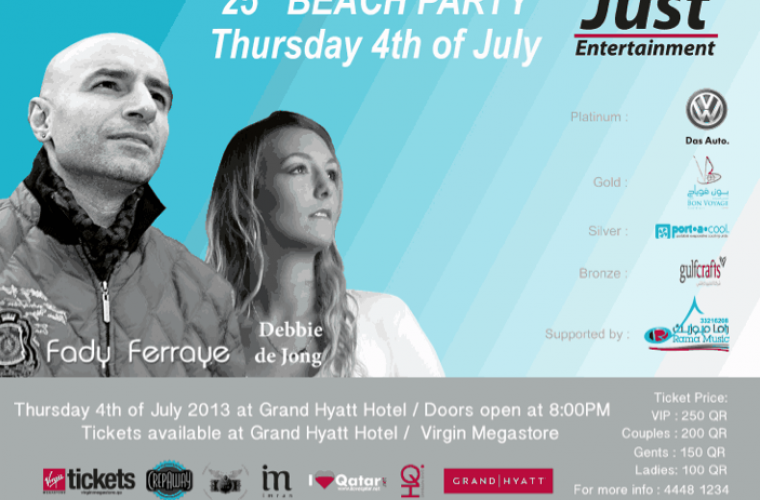 
25 DEGREES BEACH PARTY ( YES 25 DEGREES )
COOLING UNITS WILL BE INSTALLED BY A PROFESSIONAL TEAM ALL OVER THE VENUE TO PROVIDE YOU WITH 25 DEGREES BREEZE.

Debbie de Jong, a young and exciting new DJ talent from Holland has a fresh, sexy, happy, energetic, tribal sound and she wants you to hear it.

Debbie has been an entertainer since she was in diapers. She started shaking her baby booty at her mom's aerobic courses, and progressed to modeling, magazine covers, Disneyland characters, television, films, festivals, beauty contests and dance engagements until she found her true passion - playing the decks with her deep house sound. Along the way she has spent years helping street kids in Tanzania, her heart as big as her smile.

DJing for real since 2012, she has been opening for Fady Ferraye at Club NL in Amsterdam with a Modern Deep House sound and a driving Tribal Tech House style suffused with the sound of the Africa she loves.
Hear her now because you will surely hear her later.

Fady Ferraye's sound is a deep affair, mysterious, sexy, dreamy electronic dance music, with a driving heavy tech-house beat and bass. It takes you over.

DJ, producer, songwriter, label owner and event promoter Fady Ferraye has not had a normal upbringing for an artist. As a youngster growing up under the bombs of the Lebanese civil war, with access to his uncle’s vast record collection, he learned to shuttle his gigs from one shelter to another while staying in the mix. An unconventional start to a career that has heard him share his sound around the world.
Based in Amsterdam for the past 7 years, his dance tracks (more than a hundred so far) have been released on labels around the Globe: Audio Therapy, Frisky, Baroque, Alterimage, Particles and Per-Vurt, to name a few. His works are regularly played by world celebrity DJs including Hernan Cattaneo, Nick Warren, Sasha, Dave Seaman, John Digweed and James Zabiela. Dimitri Andreas, Chris Fortier, Magitman, Pole Folder and Kiko are among the artists that have remixed Fady’s tracks.
Fady’s axis is formed by his two residencies: At legendary party scene Club NL in Amsterdam (since 2005), and at top-50 ranked club BO18 in Beirut (since 2000). From there he shuttles across Europe and the Middle East, unobtrusive, shunning the hoopla, peddling his hypnotic mix.
Hurly Burly is Fady’s current signature evening developed with his buddy DJ, television personality and music lover Johnny de Mol. Every second Friday of the month at Club NL since 2008, it is an unpredictable wild and moving musical evening at which any of their DJ friends come in and share the booth, like Sander Kleinenberg, Sasha, Nhar, Dimitri Nakov, Eelke Kleijn and many others. Beautiful people outside line up early just to be a part of the Hurly Burly.
Which, by the way, is also the name of Fady's new radio show on Frisky Radio.
Fady Ferraye also runs a monthly radio show, Goosebumped, on the global internet dance station Frisky Radio. Goosebumped has thousands of devoted followers and fans around the globe.
This man loves dance music. He will move your soul. The words leave off here. Take a listen.

Written by: Gabe Marino (Serious Clubber & Party Expert from New York, who has been in the dance scene since the opening of the Paradise Garage - New York in 1976, Gabe is now based in Amsterdam)