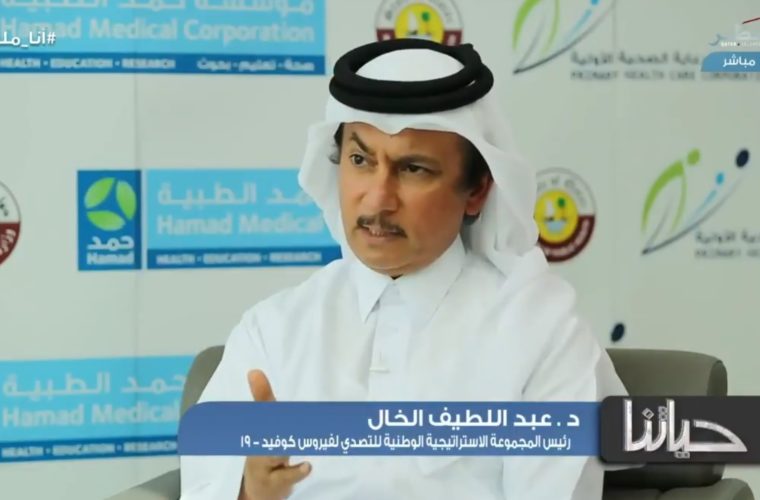 Dr. Abdullatif al-Khal, chair of the National Strategic Group on Covid-19 and head of the Infectious Diseases Division at HMC, said that the start of the lifting of COVID-19 restrictions depends on the numbers and statistics related to the pandemic in society - the prevalence of daily and positive cases and a number of admissions to hospitals and intensive care units. All these indicators so far are reassuring, although there was some concern about the increase in cases during Eid Al Fitr, but thankfully it was only a slight increase and will not change the plan to lift restrictions, which will start in May 28 (first phase).

During his interview with Qatar Television on Wednesday, Dr. Al Khal also said that despite the initiation of the gradual lifting plan, everyone must adhere to the basic preventive measures and conditions mentioned in the first phase that was announced because the virus still exists and spreading in many countries. He continued that adherence to the procedures gives very quick results and we will see the numbers decrease within one to two weeks, and the vaccination program's results appear over a period of weeks and months, and they both complement each other.

In response to a question about "Is it fair to ease restrictions only on those who received the vaccine?" Dr. Al-Khal replied: "The issue here is not related to justice, as we are still at the end of the second wave of the pandemic. It doesn't mean discrimination for them, on the contrary, it is also protection for those who are not vaccinated until now, as entry into closed spaces is still a risk until now."

“Gradually with increasing rate of vaccinated people in the community, the number of infections will decrease after that the number of those left non-vaccinated will reach very low then they might enjoy the same privileges like others,” said Dr. Al Khal.

“So far, vaccine in Qatar is very effective for the variants of the UK and South Africa reaching over 90 percent especially preventing from severe infection,” said Dr. Al Khal.

Regarding the variants which appeared in South East Asia, Dr. Al Khal said, according to recent information, the vaccines which are being used in the UK like Pfizer and AstraZeneca are very much effective against these variants.

“It means that we will be safe in Qatar from new variants because the vaccines which we are using here will be effective against these variants,” said Dr. Al Khal.

The two vaccines, "Moderna and Pfizer", have the same degree of effectiveness, safety, and side effects. "For anyone who goes to the health center, we advise him to take the available vaccine and not hesitate to take either of them," said Dr. Al Khal. "Until now, the effectiveness of vaccines used in Qatar against the new strains has been proven and we are safe from them, according to the latest scientific findings. If the manufacturers find out any out new information, updates will be given accordingly."

For people traveling, Dr. Al Khal mentioned: "We advise every person thinking of traveling for tourism to take the two doses of the vaccine to give himself and his family members adequate protection and to follow the conditions of the country they visit."

The official said 60% of eligible people in Qatar have got at least one dose of the vaccine and more than 1mn people have received both doses,, and this does not mean that vaccination is available in abundance, there is a shortage around the world. "With the vaccine, even in the State of Qatar and the Gulf, vaccination comes in limited quantities every week, two weeks or a month, and if there is an abundance of vaccination, we can vaccinate the population sooner."