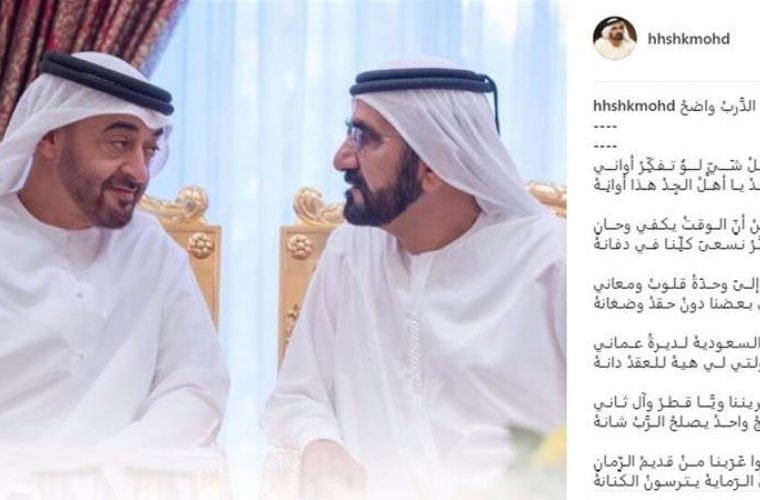 The UAE's prime minister and ruler of Dubai has urged Qatar to "return to the GCC fold" in a poem he published on his Instagram account.

"Now it is time to get united and be one heart and protect each other without grudges or hatred," Sheikh Mohammad bin Rashid Al Maktoum wrote in the poem in Arabic.

TheUnited Arab Emirates, Saudi Arabia, Egypt and Bahrain have been at the forefront of a blockade against Qatar, accusing Doha of "supporting terrorism".

Qatar has repeatedly denied the allegations.

Al Maktoum, who is known to write poems, struck a more conciliatory tone than the UAE's state minister of foreign affairs, Anwar Gargash, who has warned that the blockade against Qatar could "last years" if Doha does not change its policies.

The poem, which was published on Tuesday, stresses that the UAE is its neighbours' champion as they come "from one tribe, one flesh, one land and religion".

Al Maktoum used a famous Arabic proverb, urging citizens to put their neighbour's interests before their own. "We helped them as they helped us," the poem reads.

The prime minister also wrote: "We will keep advising Qatar openly in line with the instructions of Prophet Muhammad, who said: A wolf only eats sheep that leave the flock." (Source)