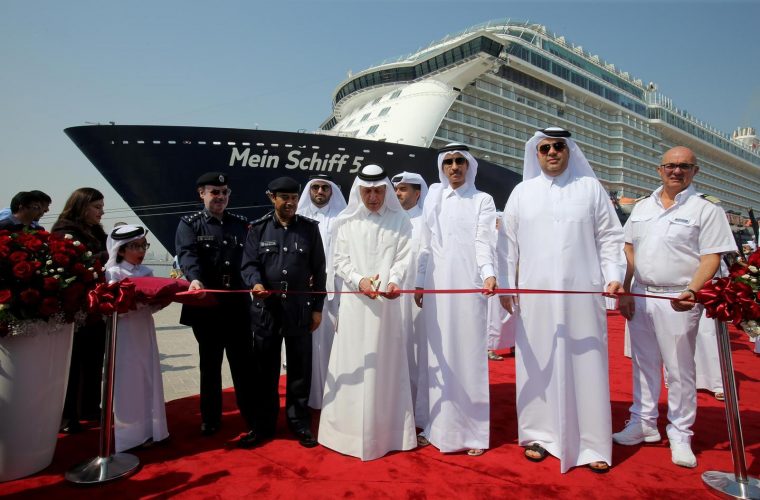 Spread over 6000 square meters, the new facility will act as a temporary terminal for the next two seasons until the completion of Doha Port’s expansion plan, due in 2022.

Mein Schiff 5 is the first of 74 ships expected this season which equates to a 66% increase in the number of ships from last season.

In addition to a streamlined experience thanks to the new terminal, passengers were greeted with a traditional welcome ceremony on the dock, complete with the Qatari ‘ardha dance and cultural experiences.

H.E. Mr. Jassim bin Saif Al Sulaiti, Minister of Transport and Communications, explained that the opening of the new temporary terminal in Doha Port will support the country’s strategy to develop cruise tourism, adding: “Doha Port is playing a key role in reinforcing Qatar’s position as an attractive tourist destination through securing and receiving international cruise ships, as well as providing all the facilities necessary for the growth of a sector that is considered a key contributor to the economic diversity pursued by Qatar National Vision 2030.”

H.E. the Minister added that Doha Port continues to receive ships even as it undergoes to a comprehensive development process that will see it become a unique and all-inclusive cruise tourism hub, highlighting that the Ministry of Transport and Communications has completed the dredging and digging works that significantly increased the port’s berthing capacity. The Minister also stated that Mwani, Qatar National Tourism Council and other stakeholders continue to collaborate towards the larger goal of delivering world-class services to all passengers and ensuring swift and seamless flows into and out of the Port.

H.E. Mr. Akbar Al Baker, Secretary-General of Qatar National Tourism Council (QNTC) and Qatar Airways Group Chief Executive, commented, “Despite this being a temporary terminal in place until we complete expansion plans in time for 2022, we wanted to ensure the experience for cruise passengers matches that of those entering through Hamad International Airport. We look forward to offering them a warm welcome and a truly Qatari experience.”

H.E. Mr. Al Baker explained that this will be the first season in which Doha acts as a turnaround port for cruise ships, with passengers beginning and ending their journey in Qatar. The port will host 16 turnaround calls, giving passengers ample time to explore the destination. In addition, nine ships will dock overnight during the season.

“The process of helping hundreds of passengers fly in, start their cruises around the Arabian Gulf, and fly home from Doha is made possible by great coordination between the tourism, aviation and hospitality sectors, as well as immigration and customs officials,” H.E. Mr. Al Baker said. “Thanks to the continued collaboration between QNTC and our partners, Doha’s emergence as a turnaround port for international cruises will bring greater economic benefit as passengers spend more time in the country, and learn more about our offering as a destination.”

Last season also recorded significant increases in the numbers of German (144%), Italian (93%) and British (22.5%) tourists arriving aboard cruise ships compared to the 2017/18 season. Added to the list were Russian tourists, whose numbers grew significantly by 257% in Qatar as a cruise destination compared to the previous season, making them the fourth largest nationality. The top ten nationalities aboard cruise ships also included Americans and Mexicans.

The 2019/20 season is expected to be even bigger, with over 186,000 passengers and over 61,000 crew arriving on 74 ships. Four ships will make their maiden calls to Doha this season, including the Jewel of the Seas operated by the cruise line Royal Caribbean.