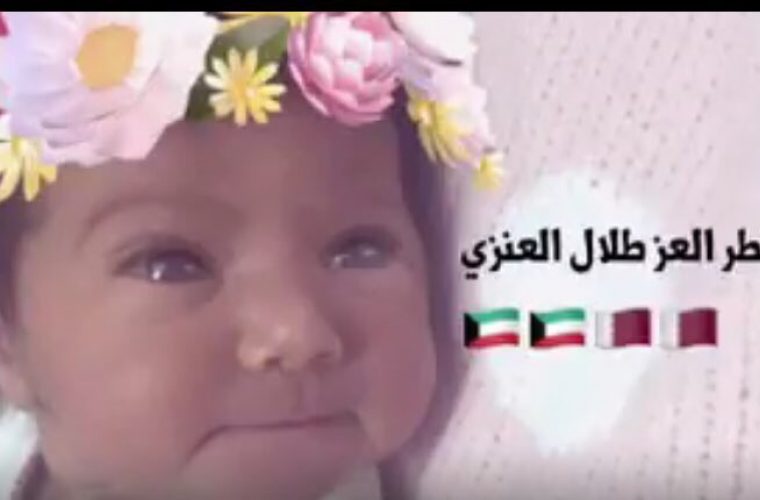 As siege of Qatar has entered the fourth week, people’s sentiments of love and sympathy with the country are also growing and in a recent incident a Kuwaiti citizen named his newborn baby girl after Qatar.

“Fajr News”, a news website of Kuwait tweeted this few days ago with the picture of the newborn baby girl and her civil ID card. Baby has been named “Qatr Talal Khalaf Alenezi” in English and in Arabic as standard spelling of Qatar. She was born on June 17.

During last days of Ramadan, Kuwaitis initiated an Arabic Twitter hashtag “Spend Eid Holidays in Qatar” to show solidarity with Qatar in the current crisis. In response, Qatari nationals on Twitter had welcomed their Kuwaiti brothers saying that “Qatar is their second home”.

Like Kuwaitis, the citizens of Oman too are displaying their love for Qatar. A number of Omani citizens who are visiting Qatar on Eid vacations were seen distributing traditional Omani halwa (sweets) for free at Souq Waqif to express their love for Qatar and its people.

The sentiments of love and sympathy for Qatar are common among all the people of the Gulf. Immediately after imposition of blockade against Qatar, the citizens from all Gulf countries including Saudi Arabia, the UAE and Bahrain had extensively used social media to express sympathy with Qatar.

To suppress these natural emotions of love for Qatar, authorities in three boycotting Gulf countries had threatened the people with 15-year imprisonments and hefty fines in case they continued showing support for Qatar on their social media accounts. (Source)