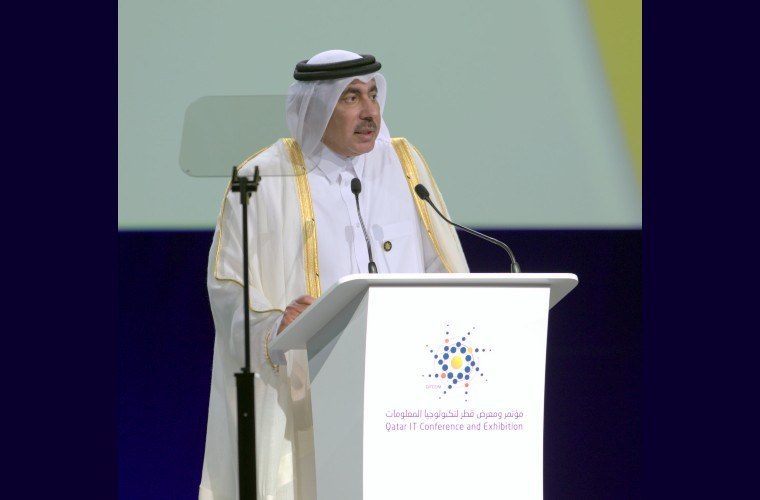 H.E. the Minister of Transport and Communications Jassim bin Saif Al Sulaiti announced that the value of transactions concluded during the Qatar IT Conference and Exhibition (QITCOM 2019) amounted to about QR 4.5 billion.

In a press statement on the sidelines of the closing ceremony of QITCOM 2019 which was held this evening, H.E. Al Sulaiti said that the fifth edition was the largest in terms of the value of contracts signed, and that this value includes all contracts signed by the parties that participated in QITCOM.

For her part, Reem Al Mansoori, Assistant Undersecretary for Digital Society Development Sector at the Ministry of Transport and Communications (MOTC), said in a speech during the closing ceremony, that the number of visitors to QITCOM expo reached about 39 thousand visitors during the days of the event, which lasted four days.

Al Mansoori said the fifth edition of QITCOM, which was organized under the theme 'Safe, Smart Cities', was held in a nod to what Qatar is aspiring to achieve and excel at regionally and globally, and that is the building of safe, smart cities the citizens of which enjoy a high quality of life and services, as well as a robust, diverse, and sustainable economy.

"The notable annual growth in the outcomes of QITCOM is a key indicator of the progress Qatar has made on its journey towards digital transformation and of the developments in the Qatari market and infrastructure, which render it an attractive destination for local and international investments, with the potential to build an exciting future."

Al Mansoori explained that the State of Qatar realized thanks to its wise leadership the importance of digital transformation and the importance of adopting the trend towards building smart cities as a strategic option to face the increasing pressures exerted by rapid urbanization on traditional infrastructure, pointing out that such conferences, exhibitions and other initiatives and awards launched by Qatar are part of the country's digital transformation strategy, which the MOTC works to support and accelerate its implementation, and encourages all government and non-governmental institutions to adopt and participate in it.

Al Mansoori highlighted that the MOTC supports local entrepreneurs and talents, and it is well aware of the potential of the technological and digital fields and the excellence of talent in the Qatari market and that it is aware of its role in supporting them and celebrating the success stories day after day.

During the closing ceremony, the MOTC announced the bodies and companies that won Qatar Digital Business Awards as well as the booths that won QITCOM awards.

H.E. Minister of Transport and Communications Jassim bin Saif Al Sulaiti honoured the winners of bodies and companies as well as the booths that win the awards.

The ICT Service Provider of the Year award, which recognizes the role played by ICT service providers in supporting organizations with the timely provision of services, was presented to A101. The Systems Integrator of the Year award goes to the enterprise systems integrator that can demonstrate high levels of customer satisfaction. This year, the award went to Mannai Trading Company.

The Mobile App of the Year award goes to a business that has pioneered an original mobile app that has enhanced the services offered to its customers. This year, the award went to Hamad International Airport.

Meeza bagged the award for Cloud Solution of the Year, which recognizes organizations that provides excellence in cloud-based solutions, services and infrastructure.

The Digital Startup of the Year award, which goes to a new product or service that has delivered measurable benefit for customers, went to Urban Point.

Smart Solution of the Year award, which is given to businesses or government entities in the transport, logistics, environment, healthcare or sports sectors - priority sectors targeted by the Smart Qatar program TASMU - went to Bonocle.

The award for SME Digital Transformation of the Year, given to an SME that has successfully deployed innovative digital tools to enhance their operations and services, went to Gulf Times Community.