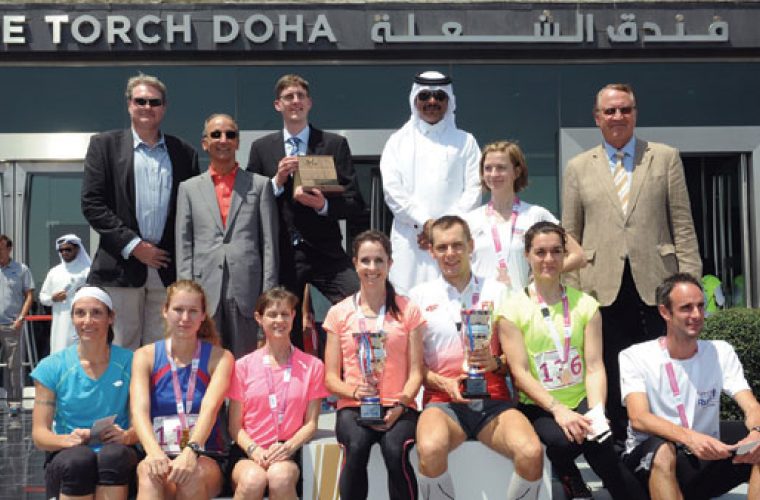 The world’s top male tower-runner, Piotr Lobodzinksi of Poland, broke the course record at the third annual Torch Staircase Run in Doha yesterday after scaling the hotel in a record time of six minutes and 14 seconds.

Organised by Aspire Zone Foundation (AZF), the Torch Staircase Run is the only Tower-running World Association (TWA) Grand Prix event in the region.

“I came to the Torch Staircase Run with the aim of defending my World Cup title and, having broken the course record in Doha, I’m confident that I can achieve this,” said Lobodzinski. “This is my second first place victory of the new season and I aim to keep up my winning streak.”

Female world champion Suzy Walsham maintained her position at the top of the women’s category by ascending the tower in seven minutes 42 seconds, and later marvelled at the race’s unrivalled setting.

“The Torch is a spectacular-looking building, in fact it’s the sort of building you walk past and think, ‘wow, that’s one I should run up’,” said Walsham. “From a technical perspective the stairs are actually very high and there are lots of them per floor, so it’s actually a tougher race when compared to some others.”

Nevertheless, the Australian athlete noted that such challenges had not deterred members of the public, especially women, from taking part. “It was really great to see so many female athletes warming up downstairs because typically you don’t often find many women attracted to these sorts of events due to their intensity and difficulty.”

AZF chief executive officer Khalid Abdullah al-Sulaiteen said: “We are proud to host this race as the first grand prix race of its kind in the Middle East. The Torch Staircase Run is a testimony of the overall Aspire mission to engage the local community in healthy living.”

According to TWA president Sebastian Wurster, increased public engagement is a primary aim of the organisation. “The community is a very important aspect of this sport as it’s something everyone can integrate into their everyday lives, because all they have to do is take the stairs instead of the elevator and make stair running part of their daily training.”

The inspirational nature of the event was typified by Moussa Dahdouh, a former boxer who lost the use of his left leg in a car accident seven years ago. Now a member of the Qatar Paralympic Association, he took part in the Torch Staircase Run for the first time this year.

“I was excited but nervous about the event but trained every day to be able to compete,” said the 24-year old Algerian. “Despite my injury I think my fitness levels are what helped me reach the top of the Torch to see the spectacular views of Doha.”

Torch Doha Hotel general manager Gerhard Foltin said: “It is great to host the Torch Staircase Run for the third time and witness a greater participation every year. We would like to thank Aspire Zone Foundation for organising such a beautiful Tower-running Grand Prix and look forward to host next year’s race.”

The Tower-running World Cup was inaugurated in 2009 to cater for the exponential growth of interest in this relatively new sport. As its popularity continues to increase, the TWA now recognises 200 global staircase runs every year, in which more than 100,000 people compete. Tower-running began in the Empire State Building in New York and spread across North America before becoming a globally recognised sport. Staying true to its roots, the TWA kicked off its Grand Prix season in New York last month.