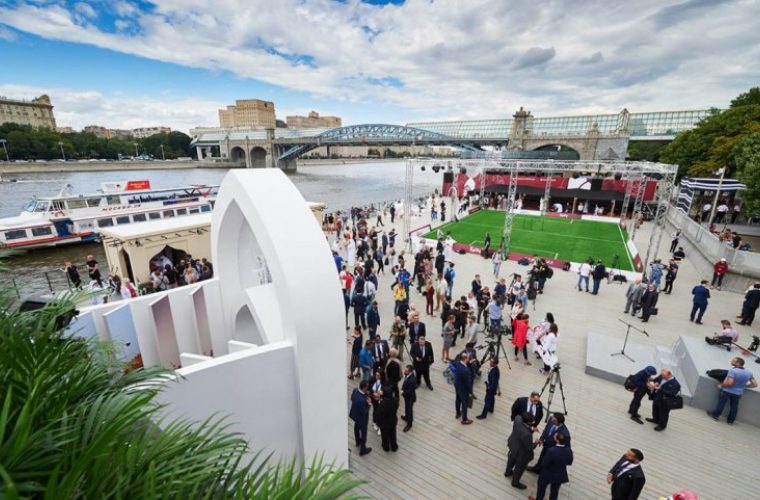 More than one million people engaged with Qatar’s Russia 2018 activities as the next FIFA World Cup™ host nation said “see you in 2022”.

The Supreme Committee for Delivery & Legacy (SC) partnered with a range of Qatari stakeholders to launch creative campaigns in Doha, Moscow and Saint Petersburg in order to showcase the country as a thriving sporting and cultural destination, the SC said on its website.

The activations, including Majlis Qatar, Qatar Elements, the Qatar @roadto2022 Exhibition and Qatar-Russia Portals, offered people a glimpse of the tournament Qatar will organise in just over four years’ time – namely one that is compact, family-friendly and welcoming to all.

Majlis Qatar, the SC’s showpiece installation in Gorky Park, Moscow, attracted more than 48,000 visitors during its eight-day run. It showcased Arab hospitality and offered a taste of the atmosphere fans can expect in 2022. A short walk from Majlis Qatar was Qatar Elements – the world’s first floating multimedia museum which took fans on an immersive journey through Qatar’s history, culture and traditions. This attracted more than 13,000 visitors.

Fatma Al Nuaimi, the SC’s Communications Director, said: “We are delighted with the reaction to our activities, along with the outstanding attendance figures. “Alongside our stakeholders, we worked very hard to ensure as many people as possible were able to see a glimpse of what Qatar has to offer in 2022. With more than a million people enjoying the opportunities and experiences, it’s safe to say the outreach was a resounding success.”

Al Nuaimi continued: “Russia hosted a memorable tournament and we look forward to building on this legacy by hosting a truly unique World Cup in four years’ time. “Over the past month we have told fans we’ll see you in 2022. Thanks to our activities in Doha, Moscow and Saint Petersburg, I’m especially confident we’ll see many fans again when Qatar hosts the first World Cup in the region.” In addition to the activations in Moscow and Saint Petersburg, more than 180 SC employees and stakeholders travelled to Russia to take active roles in observation, secondment and shadowing programmes.