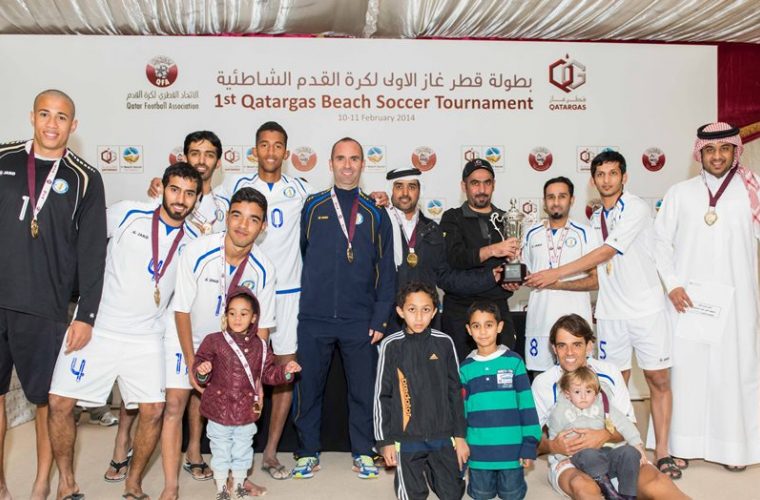 Al Khor received total prize money of QR30, 000 while Al Khraitiyat received QR20, 000 and Al Arabi received QR15,000. Ambi of Al Kharaitiyat, who scored a total of 10 goals in the tournament received the prize for top scorer. Mohammed Al Ghamdi of Al Arabi was awarded the Best Goalkeeper of the tournament, and Most Valuable Player was awarded to Ibrahim Al Rumaihi of Al Khor. As for the Best Team, and Best Team Manager, these were awarded to Al Rayyan, and Jaber Al Jorohob of Al Khor. Qatargas presented special prizes to the winners of all these awards.

The tournament that was attended by hundreds of Qatargas employees and their families, began on Monday, 10th February and concluded on Tuesday 11th February, 2014.

Organised by the Qatari football governing body QFA, the first edition of the Qatargas Beach Soccer Tournament was held in Qatargas’ winter camp in the sealine area, and witnessed the participation of 12 local teams.

Mansour Rashid Al Naimi, Qatargas Public Relations Manager said:“Our sponsorship of this tournament held on the occasion of the National Sport Day is line with Qatargas’ corporate social responsibility initiatives in supporting sports. As the World’s Premier Liquefied Natural Gas Company, Qatargas sponsorship of this championship is part of our commitment towards the local community and contribution to human development as a pillar of the Qatar National Vision 2030.

“I would like to thank QFA and its management for their efforts in the excellent organization of the tournament and Qatargas looks forward to continue this fruitful co-operation with QFA in the future to support and develop the sport of football in Qatar.”

Commenting on the occasion, Khalid Mubarak Al Kuwari, Director of Marketing and Communications of QFA said: “We would like to congratulate Al Khor on winning this important tournament and also congratulate Al Khraitiyat and Al Arabi for winning second and third place respectively. This tournament is key to QFA as our objective is to constantly have a direct impact on the development of beach football.”

He added: “We are very proud to organise this tournament with Qatargas and look forward to working with them on future joint projects that feed into the development of football across the country.

Abdullah Al Mohannadi, Chairman of Futsal and Beach Soccer Committee at QFA commented: “Congratulations to the winning teams and special prize winners, and hard luck for the rest of the participating teams. All teams played extremely well and demonstrated good sportsmanship on the field. We appreciate Qatargas’ support for this tournament and thank them for their continued assistance. The tournament was a huge success and was attended by many people and we look forward to organising the 2nd edition next year.”