Qatari resident to Run, Alone, Around all of Qatar in record breaking attempt starting 18 February 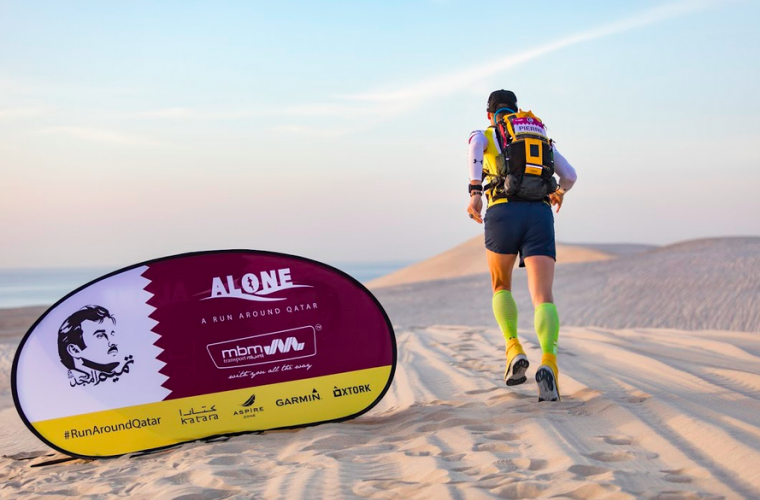 Alone, A Run Around Qatar (#RunAroundQatar) which launches yesterday 11 Feb, is a challenge designed by Qatari Resident Pierre Daniel to show residents and nationals the power of the human spirit, raise awareness of the country’s natural beauty and promote healthy living.

The Challenge, including an official world record attempt is presented by MBM Transport and with key partners Katara and Aspire, is running from 18-24 February, 2018 in the name of his highness Sheikh Tamim Bin Hamad Al Thani.

The challenge will see Frenchman Pierre Daniel, a resident for over ten years, undertake the first athletic run to circumnavigate Qatar’s border covering over 439 kilometers on foot in no more than seven days. Additionally, during the challenge (on days three to five) Pierre will attempt to set a new official world record for the fastest run North to South in Qatar.

Pierre will be undertaking the challenge alone, receiving no assistance from his support team, who will only be capturing key moments of the run to share the challenge with the public.

Throughout the challenge, Pierre will carry all his clothing and necessary supplies. However, he must source his water along the way, either from farms or local population he passes, with distances as far as 50km to travel from one water source to another. His entire equipment and food supply for the challenge weighs only 7.515kg (without water) but he will carry at times an additional 10kg of water.

During the challenge, supporters can follow Pierre via a unique tracking portal developed by Aspire Zone’s IT team, which will show live tracking of Pierre’s progress including distance covered, speed, heartrate and more at https://alone.aspirezone.qa/

On his challenge, Pierre comments; ‘The idea of running around Qatar was born from my admiration for Qatar and adventure. I have had the most amazing time enjoying the natural beauty of Qatar over the last decade. The austere nature, simplicity of the geography and the harmony of colors reveal many secret beauties to appreciate. The natural beauty of Qatar is something that most take for granted and don’t explore, hopefully in sharing the challenge more people will go out to discover Qatar.

He continues ‘I have done many walks and runs across the country and the world, completing the famous Marathon Des Sables in Morocco last year but that was a mere 250km, so this Run Around Qatar seems to be the ultimate challenge. Running long distances in solitary offers a spiritual experience, there’s a lot of introspection and it takes a huge commitment and suffering and it helps me appreciate the sacredness of life and its fragility.

He finishes ‘As someone who has only been an endurance athlete for the last couple of years, I hope this shows the true potential of the human spirit when one commits and inspires people to push themselves further than they believed possible’

His Saeed Mohamed Nazeer of MBM transport, the presenting partner of this challenge comments. MBM has a philosophy of being with you all the way, and we are proud to support Pierre as he goes all the way around Qatar in tribute of our great nation and its beauty and the potential of all Qatari residents.

Pierre will start his challenge on 18 February at 7:00am from Katara and will cover the following route.

Pierre, aims to finish at 10:30am on Saturday, 24 February and hopes Qatari runners (young and old) will join him for the final couple of kilometres within Katara.

Pierre is supported by MBM transport, Katara, Aspire Zone, Garmin, Xtork and Pro-TV. He can be followed live on Alone.Aspirezone.Qa or via his Instragram PierreDaniel_Active or via the challenge hashtag #runaroundqatar or Instagram/twitter and facebook @RunAroundQatar