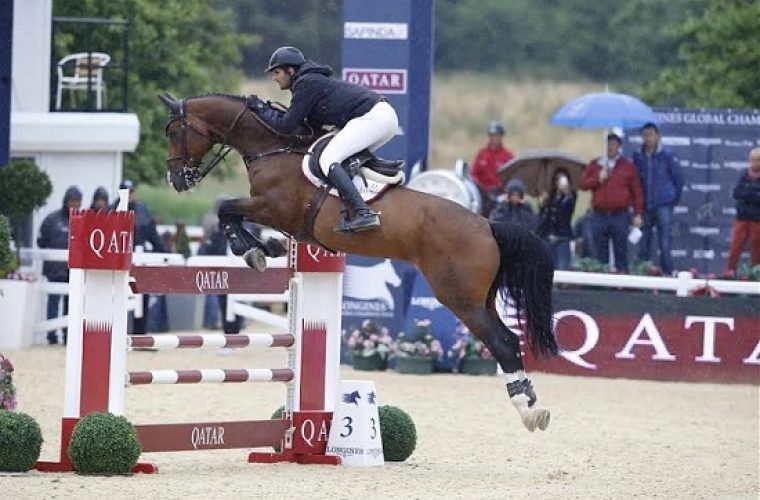 Qatar’s Equestrian show jumping team will make history this summer when they become the first ever Qatari equestrian team to compete at an Olympic Games. With a little over two months to the start of the Rio 2016 Olympic Games, Sheikh Ali bin Khalid Al-Thani, Bassem Hassan Mohammed, Ali Al-Rumaihi, Khalid Al-Emadi, Faleh Al-Ajmi and Hamad Al-Attiyah are working hard to be in top form for the biggest competition of their lives. Learn more about what it means to them to make history in their “Olympic Dreams” film found on the Qatar Olympic Committee’s (QOC) social media channels.

“Qualifying for Rio was an indescribable feeling,” Sheikh Ali bin Khalid Al-Thani said, adding, “We worked hard to qualify and we succeeded. It was never easy because our group was very challenging and there was only one qualifying spot.”

Sheikh Ali, who is currently ranked 6th worldwide in the Longines Global Champions Tour, credits his early exposure to nature on his uncle’s farm as his reason for taking up equestrianism: “My uncles had a few race horses as well as everyday horses and that’s how I began riding. I started horse riding when I was 7 or 8 as a hobby on their farms.” He said.

The team’s well-earned victory in the 2015 FEI Nations Cup was built on their gold medal win in the 2014 Asian Games and led to another victory in the Barcelona 2015 Longines Global Champions Tour. Yet despite their successes, they also face unique challenges that most athletes do not.

“There are always difficulties in any sport, and for this sport the horse becomes the challenge,” said Bassem Hassan Mohammed, adding, “Equestrians interact with living things and our success depends on them and there is always something new with the horse, either it is injured or not feeling well psychologically.”

Mohammed, 29, took up horse riding at the incredibly young age of 5, eventually training professionally with the Qatari Equestrian Federation and securing a litany of achievements including placing 1st in the Doha leg of the 2014 Longines Global Champions Tour.

By spending so much of their day together, Qatar’s equestrians and their horses share a special, strong bond: “During our training camp in Holland, we usually stay in the stables from around 8am up to 5pm,” said Faleh Al-Ajmi, adding, “so we basically spend most our times with the horses and have a very strong connection to them.”

The team, who recently competed in the Madrid leg of the Longines Global Champions Tour from 19th to 22nd May, keep a stringent training and competition schedule throughout the year to maintain their world-class level.

“We usually begin training in the summer, and from April to September we head to training camps in Europe, particularly in Holland,” said Khalid al-Emadi, 22, adding, “We train six times a week for three hours daily.”

The demanding schedule must be carefully thought out by Coach Tops and his administrative team, striking a delicate balance between a well-trained and exercised horse, and an exhausted one.

“A horse’s condition fluctuates from day to day and if there are any problems the rider has to find out by himself.” Said Ali Al-Rumaihi, 35, adding, “You develop a better sense of the horse the more time you spend riding it.”

Like the rest of his teammates, Al-Rumaihi started horse riding at a very young age thanks to his family’s support and his early exposure to horses. Al-Rumaihi went from riding his father’s pure-bred Arabian horses on his farm to winning gold in the 2006 Asian Games in Doha, Qatar – which he hopes to emulate in Rio 2016. “The most important thing is to represent Qatar in the best way possible, and hopefully win an Olympic medal.” He said.

Long considered part of Qatar’s tradition and heritage, Arabian horses were thought to be used by Qatar’s founding fathers during their fight for independence from the Ottoman Empire, ingraining them as part of Qatar itself. While Qatar’s Equestrian Team has already made history, the athletes hope to also make the podium in Rio.

“The Olympics is every equestrian’s ambition,” said Hamad al-Attiyah, adding, “It is my life’s dream and I will give it everything that I have.”

At only 20 years old, Al-Attiyah is the youngest member of the Equestrian Team, yet has already set on the path to a successful career after becoming the youngest rider in history to ever qualify for a World Cup final at 18 years old.

The tight-knit team spend their days and nights together training – creating a special comradery that bolsters their performance in the arena and lifts their spirit as a team.

“Winning as a team is something special for me,” said Sheikh Ali, adding “I have spent years with my teammates – we are like brothers. Our strong relationship makes for a strong, competitive team.”

Aside from the Olympic podium and the glory that comes with it, the team also hope their participation in the Olympics inspires the next generation of riders, or athletes of any other sport.

“Qatar has never had an equestrian team compete in the Olympics. This will push young athletes and fans to take up equestrianism.” Said Al-Rumaihi. Meanwhile Sheikh Ali said:

“I suggest anyone who has an interest in any sport to pursue it and represent your country because our country is a great supporter of sport.”