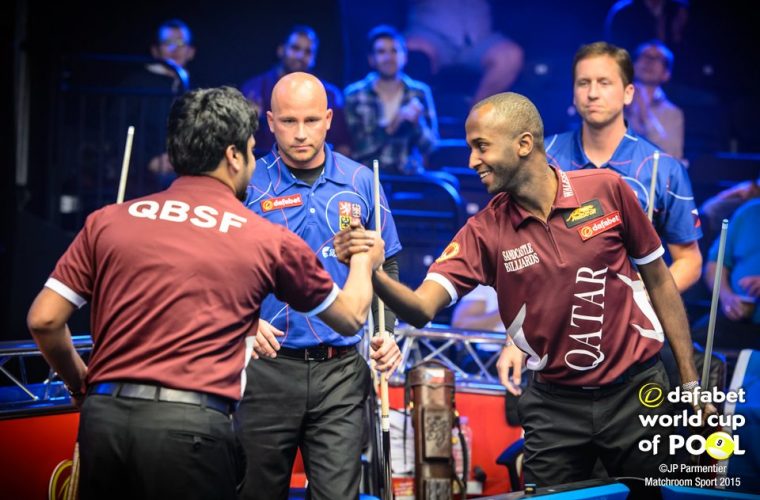 Friday evening was a tale of contrasting fortunes as Qatar put on a masterful performance to reach the quarter-finals for the first time in their history and the Philippines crashed out, failing to make the last eight for the first time in the tournament’s history. In the other match of the session, Finland once again won to look on track for their third semi-final in three years.

Taking place at the York Hall in London, the Dafabet World Cup of Pool features 32 two-man teams from around the globe competing for a $250,000 prize fund. Televised live in over 40 countries around the world, the event is now entering its tenth year.

Team Qatar who had looked so good in their win over the USA in the opening round, continued in the same rich vein of form as they beat the Czech Republic 7-3 to move into the World Cup of Pool quarter-finals for the first time.

Both Waleed Majid and Bashar Hussain played superbly, as they dominated the Czechs and made the most of their chances to secure a great win.

From the outset, Qatar looked a solid unit combining power with a bit of artistry as they eased into a 3-0 lead as they broke and ran from the off. Bashar missed their first ball of the match as he twitched on the 2 ball but after Czech’s Roman Hybler had missed it also, Waleed played a sensational carom off the two onto the rail and then onto the 9 for 4-0.

The Czechs got their name on the scoreboard in the next and won a drawn out sixth rack to make it 2-4 but when Hybler scratched on the 2 ball, it was a chance that Qatar grasped to move to 5-2. Waleed missed a long 2 ball in the next and the momentum went back to the Czechs who cleared for 3-5.

Hybler though missed the 2 ball in the ninth after the Czechs had pushed out and Qatar had put them back in. Majid slid it home along the rail and he and Bashar coped well with a tricky layout to reach the hill at 6-3.

The Czechs got to the table in the next but a clumsy safety from Michal Gavenciak left the 7 ball on and Bashar Hussain played a great cross bank to pot it and set up the win.

Commented Bashar, “We are delighted to reach the quarter-finals for the first time, and we know everybody watching in Qatar will be very happy. We played very well against USA and we were very happy with the performance tonight; we didn’t make too many mistakes.

“Beating USA gave us a big confidence boost. They are a big team with big players and that gave us a lot of confidence, which we have built on with the win today. Japan is a very good team but if we can keep the same rhythm and the same focus we know we can win,” he added. 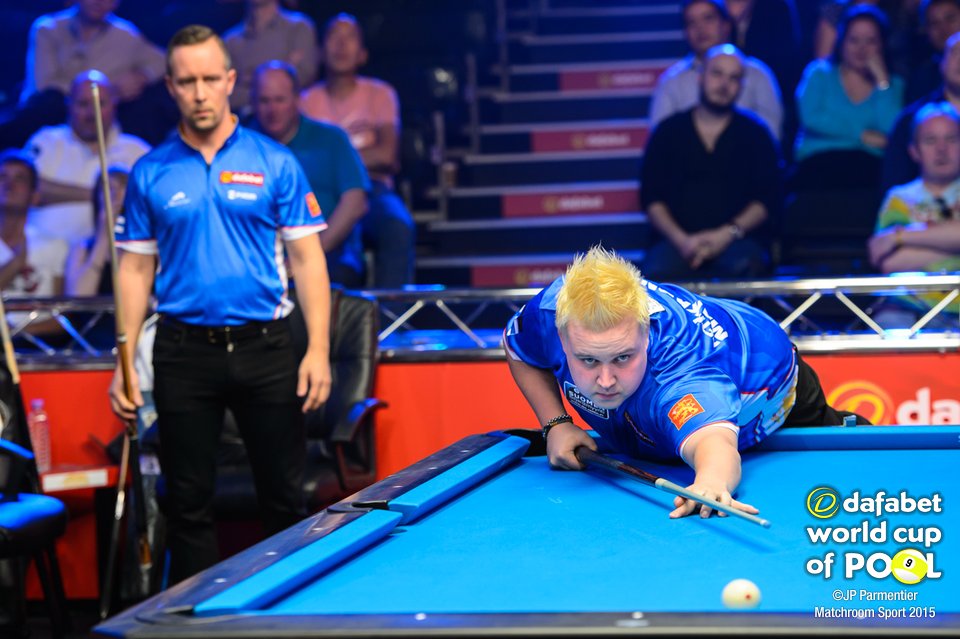 Finland and Singapore shared the opening four racks as both sides looked a little nervy but it was Finland who took the lead for the first time as Petri Makkonen played an outstanding positional shot to leave the 7 ball for his partner Mika Immonen.

Chang Keng Kwan badly missed into the centre pocket for the second time in the match and that left three easy balls for Finland and instead of 3-3, the score became 4-2.

A poor shot from Chang saw him pocket the 1 ball but nudge the 2 and leave it in unpottable position. Aloysius Yapp’s safety caught the knuckle of the centre pocket and left it on and Finland ran out to increase their lead.

A dry break from Makkonen though, got the Singaporeans back to the table but they couldn’t capitalise and Finland reached the hill at 6-3 and from there they finished the last rack off for an excellent win.

“We weren’t super pleased with that performance; we had a couple of unforced errors and a couple of bad positional shots but we got away with it because Singapore weren’t in great form. But we will take it and there were some positives; our run-outs were pretty good and we played a more consistent game. We just need to get the breaks going and clear the table,” said Immonen. 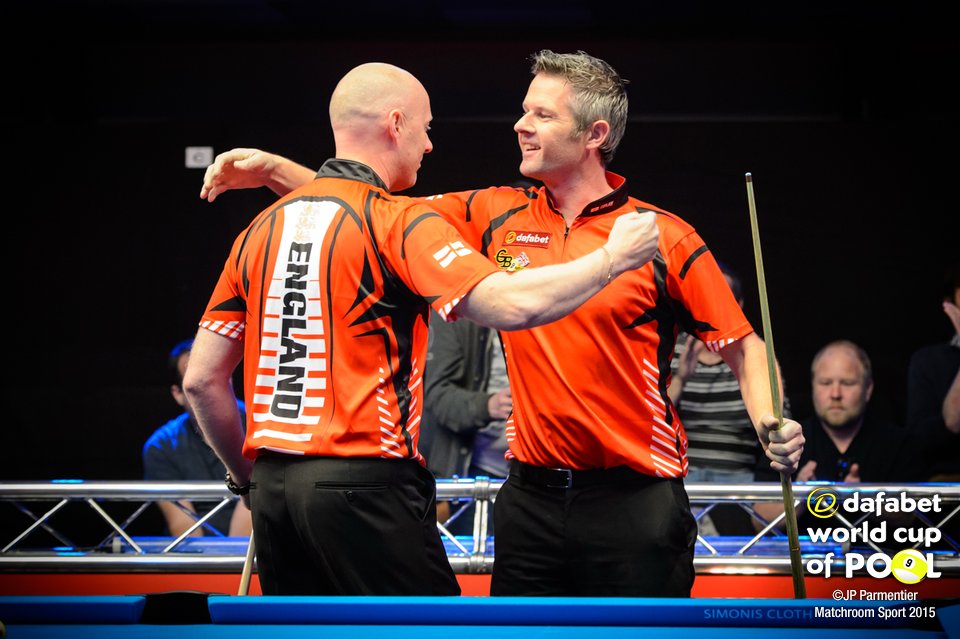 England B – Daryl Peach and Mark Gray – started out as the big outsiders against Team Philippines but got off to a great start with some solid play and no mistakes as they took a 4-1 lead against the highly fancied Filipinos.

Warren Kiamco and Carlo Biado looked nervous and made some uncharacteristic errors to help the English on their way. However, a dry break from Peach gave the Philippines a chance and they ran the table out to get 1-4.

They took the next and when Gray scratched on the 2 ball following a push out, the Filipinos ran out to get within one of the English. A scratch from Peach left a tricky table but when Biado sunk the 9 ball to tie it up at 4-4, it began to look ominous.

That was as long as the comeback lasted. There was a safety battle on the 2 ball in the next but Biado left a look at it and Gray potted it down the side rail to set up the rack and restore the lead. In the next came an even bigger blow for the Filipinos. Placed in snooker by Biado, Peach outrageously fluked the 3 ball and obtained shape on the 4 and England B cleared for 6-4. They ran the next for an outstanding victory against the odds.

Gray said, “We had a great start with some good outs and we were playing well. But from 4-1 up Daryl got kicked in off on a break and we didn’t have much luck.; I played a good shot on the 2 to try and carom the 6 in and there was no gap but somehow the white scratched in off and the game turned to 4-4 and you are playing a best of five to get into the quarter-finals.

“We have a great chance of reaching the final. We haven’t had easy matches but we have beaten two good teams. We have played the Finnish lads many a time on the Euro Tour and we both have good head-to-head records against them so I am confident we can win that match.”

Peach added, “There were a few twists and turns but we were trying to win each mini interval 2-1 and we did win most of them 2-1. That gives you a short-term target. We played well and deserved the win.

“Finland is a tough match but so was that. It is a longer race so there is more time to settle down. They are a very good team as proven in the past when they have won it but my and Mark are a good team too and reached the final the only time we played the World Cup together, so we could be in for a good match.”

Saturday 18.30 England A v Romania then Finland v England B

The following broadcasters are screening live coverage of the Dafabet World Cup of Pool:

For fans outside those territories, Perform Group will be streaming the event via their www.livesport.tv service. In addition the Dafabet World Cup of Pool is syndicated around the world as 31 x 1 hour programmes by Matchroom Television.

Featuring 32 two-man teams from around the world, the Dafabet World Cup of pool is celebrating its tenth year as defending champion England attempt to become the first team ever to successfully defend the title. The event runs from 22nd to 27th September.