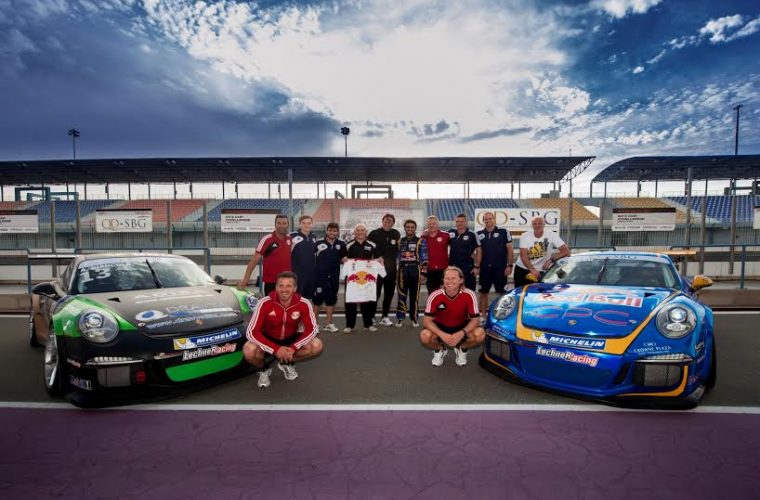 The Doha-based duo will feature as part of the 10th anniversary celebrations of the Bahrain Grand Prix lining-up on a strong grid of 17 Porsche drivers including the reigning Porsche GT3 Cup Challenge Middle East champion, Zaid Ashkanani of Kuwait, Bahrain’s past champion Salman bin Rashid Al Khalifa along with a host of home-grown emerging talent and racing veterans.

Drivers spanning eight nations comprising of host nation Bahrain, the United Arab Emirates, the Kingdom of Saudi Arabia, and Kuwait are preparing to enjoy the experience of a lifetime. Each driver will race twice across the weekend over the challenging 5.4KM GP circuit at Sakhir in front the region’s passionate fans in the stunning Porsche 911 GT3 Cup.

The announcement is a huge boost for local motorsport with some of the best regional drivers given a rare opportunity to showcase their talents on the biggest stage of all, while sharing the occasion with the current stars of Formula One.

It is only the third time in the history of the series in the Middle East that local Porsche drivers will support an official Formula One race weekend. Two races over 10 laps have been confirmed by organisers. Adding to the interest of regional fans, Race 1 starts at 16:30 on Saturday 5th April followed by Race 2 again at the same on Sunday 6th April, immediately before the showpiece Formula One race.

This latest opportunity for local drivers not only sees an emotional return to the Bahrain International Circuit, the home base of Lechner Racing, but also witnesses the region’s top drivers playing a leading role in one of regional motorsport’s biggest events.

Teenager Frijns will be looking to further boost his knowledge of the Bahrain track and increase his experience in the 911 GT3 Cup as he looks to build on his impressive results is Season 5. The Dutch driver ended the fifth instalment of the series in seventh place after finishing second and third in the two races of the final round at the Bahrain International Circuit.

The Frijns Structural Steel driver said: “This is a dream come true to share the same track with the greatest drivers in the world at the beginning of my career. I had a fantastic end to the season where I was challenging established drivers and managed to get onto the podium three times. I am still developing as a racing driver and to have the opportunity gain more experience in front of packed stands on the biggest weekend for motorsport in the region was something I was very keen to be a part of.”

Meanwhile, former Bronze Category winner Manfred Ender is looking forward to rubbing shoulders with world-renowned racing drivers in the exciting Bahrain Grand Prix support race. Also based in Doha, Ender was unlucky to finish outside the top three of the Silver Michelin category in Season Five with Qatari legend Nasser Al Attiyah edging him into fourth.

Speaking ahead of the Bahrain support race Ender said: “Even after the fifth season has ended the excitement around the series continues and this time it’s in front of a global audience.”

He added, “I was disappointed not to make it into the top three of the Silver Michelin category but that certainly gives me motivation moving forward. The other drivers are not far ahead and if I return again next season I will be looking to chase them down and win another trophy for my new home, Qatar. In the meantime the focus is on this incredible opportunity we have in Bahrain this weekend. To be able to sample the special Formula One atmosphere will be amazing and I expect it to be a genuine highlight of my career.”

For Porsche GT3 Cup Challenge Middle East Manager Walter Lechner racing at such a prestigious event can only be a positive for the aspiring young drivers. He said: “We’re thrilled to be back in Bahrain especially to support the prestigious 10th anniversary Grand Prix. We have only just concluded the most exciting series in our history but now the drivers have a new goal and a new opportunity. This race will give every single one of them a chance to be heroes in front of packed stands as well as Middle Eastern and global TV audiences.”