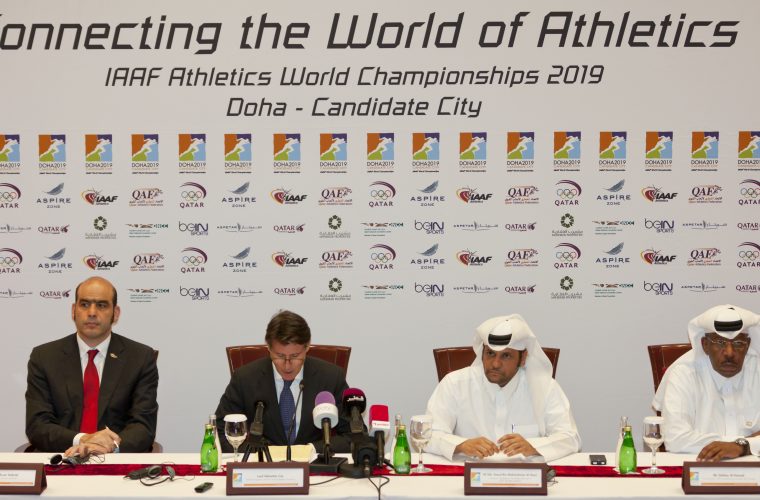 The Press Conference for Doha’s Bid for the 2019 IAAF World Championships was held today, Friday Oct 31 at the Headquarters of the Qatar Olympic Committee in West Bay, Doha.

The Press Conference marked the end of the IAAF Evaluation Committee’s 2-day visit to Doha, to assess its ability to host the 2019 IAAF World Championships. Doha is competing against bids from Barcelona, Spain and Eugene, USA.

After briefly explaining to the Press how the Evaluation Committee will arrive at its decision on who will host the Championships (basing this on site visits carried out in the 3 potential host cities and carefully studying the bidding documents from each candidate in 16 key areas, such as: Vision and General Concept, Medical and Anti-Doping, Security and Finance, etc.), questions were opened to members of the Press.

How the hot climate would affect the 2019 Championships if held in Doha (the proposal is for the event to be held at the end of September/beginning of October, 2019) was at the forefront of these questions, as well as the suitability of the Athlete’s Village being situated in the centre of Doha (Downtown Msheireb has been earmarked as the location to house the competing athletes).

The IAAF Evaluation Committee announced that the 3 potential hosts have a further week from today to submit additional information to support their bids, with the final decision being made on Nov 18, 2014 in Monaco by the IAAF Council.