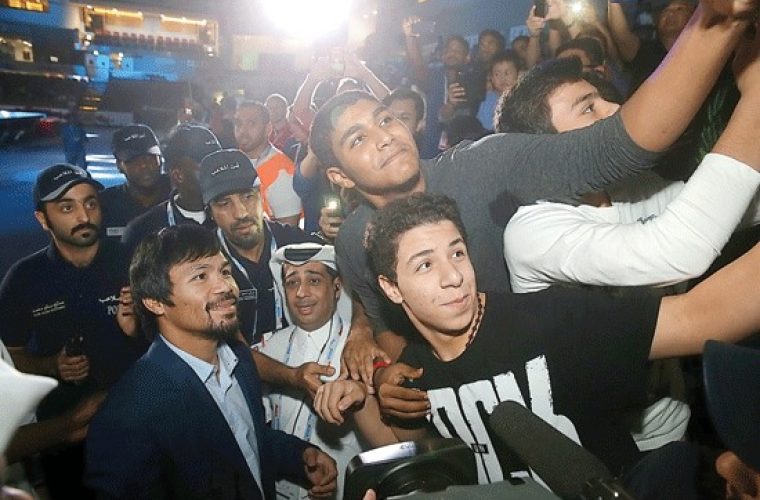 ‎”I would love to have my next fight here in Qatar, and my team is now working towards that. Whether it will be against (Britain’s) Amir Khan or Floyd Mayweather, I’ll be ready.

“I would love to have a rematch against Floyd in Qatar,” he added. The eight-division world champion is a guest at the 2015 AIBA World Boxing Championships being held in Doha.

“It was a nice surprise to see so many Filipinos here, it kind of felt like a home away from home. It’s also great to see the World Championship in this region for the first time. It’s important to reach out to new generations and new places, which is why I have come to Doha to offer my support,” Pacquiao said.

The 36-year-old, who lost to Mayweather Jr in the world’s richest boxing fight in May, was received by Yusuf Ali Kazim, President, Qatar Boxing Federation (QBF) and Dr Ching-kuo Wu, President, AIBA.

Pacquiao later visited the Corniche for a photo-shoot arranged to promote the October 6-16 event being held at Ali Bin Hamad Al Attiyah Arena.

“It’s my first time in Qatar and it has been a good experience with the warm welcome of the people here,” he said in a brief session with Filipino press people.

Pacquiao recently announced he will have one more fight early next year before he leaves the ring to concentrate on winning a Senate seat.

Khan is one potential opponent for Pacquiao, with American Terence Crawford among the other contenders, a BBC report said yesterday.

“It took me time to decide on running for the Senate because to be a senator I need focus and give up some things that could affect my work. To be a senator is no joke as the whole country is your responsibility,” he said.

The Philippine boxing hero, who serves as congressman representing Sarangani province, declined to reveal the party he is joining in the coming senatorial race. “I will announce that when I file my candidacy,” he said in response to a query.

Asked about his priority of elected, he said Overseas Filipino Workers (OFWs) and farmers.

“One of my priorities would be OFWs and giving incentives to farmers to prevent rice smuggling,” he said.

The devout born-again Christian said he will be needing support of Filipinos back home and abroad — including in Qatar — in his senate bid. “I need 100 percent of your support and prayers,” Pacquiao said.wDespite the success he has achieved as one of the best fighters of his generation, Pacquiao has remained humble, winning the hearts of Filipinos and fans around the world.

“I want to thank all Filipinos here. I know that even though I wasn’t able to come here in the past years, they have always supported me,” he said.

Pacquiao said he was ‘satisfied’ with what he has achieved in his 20-year career. “Yes, of course, I am very happy with the way my career has shaped up over the years.

“I have travelled a lot, meeting a lot of people and it has opened a lot of doors for me. I became a congressman and now I would be standing for the Senate.

“Being a politician and a public servant is different from boxing. And now that I am standing for the Senate, I believe I can help more people. Especially, the people in need.

The voters can visit my province and see what I have done for my people,” he added.

Asked about his top fights, Pacquiao said: “Ah! I have had many big fights in my career. Some of these were against Oscar De La Hoya, Miguel Cotto, Juan Manuel Márquez, Ricky Hatton and Floyd Mayweather.” Pacquiao, who underwent surgery to repair a torn rotator cuff after the fight against Mayweather in May, boasts a record of 57 wins, six losses and two draws.