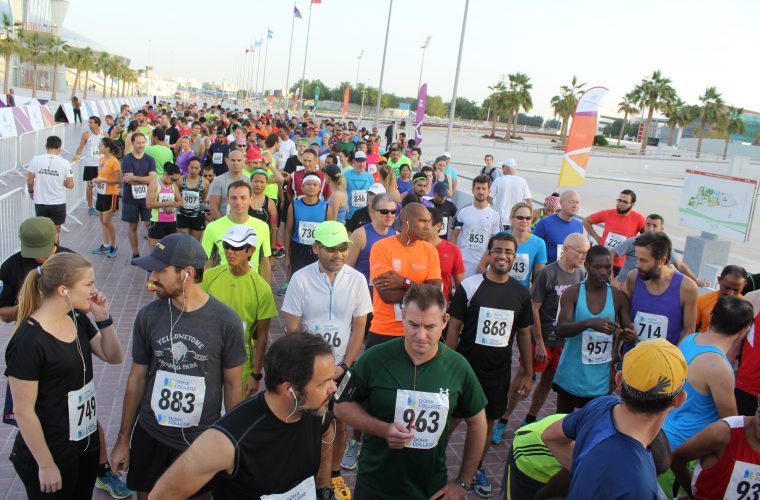 More than 650 runners braved the brisk early morning air to line up for the fifth annual Doha College 5km and 10km run at Aspire Zone on Saturday, 5 December.

The 10km race was won for a second time by marathon runner Andrew Jones in 32 minutes 09 seconds while Nathan Riding took the honour in the 5km in 18:22 for the third time.

Doha College Principal Dr Steffen Sommer praised the efforts of all the participants, whether they run, jogged or walked around the course.

“The purpose of the Doha College Run is to encourage health, fitness and fun in our community and it was fantastic to see such a large number of participants on Saturday,” Dr Sommer said.

“Congratulations to our winners in each category, many of whom were successful in previous years,” he said.

“We were privileged to have some extraordinary talent at the event, including the overall winner of the UAE 50km ultra-marathon held in Doha on Friday and world champion for the 100km race Camille Herron.”

Race Director Nicola Symons thanked the sponsors and the community for their ongoing support.

“It was great to see some participants collect their first race medal as well as hearing about those who had recorded personal bests,” Mrs Symons said.

“Some groups were running for special causes too. It was fantastic to see so many people enjoy the race and have fun at the same time.

“I would like to give a special mention to our sponsors, Aspire Zone Foundation, The Torch Hotel and Vita Coco, as well as Liz McColgan, the USA 50km team, and the many volunteers and marshals, who were a major contribution to the event’s success.”

“We are delighted to have hosted the Doha College 5km and 10km run at Aspire Zone for another year and pleased to see so many participants in the race,” he said.

“One of our main areas of focus at Aspire Zone is encouraging the local community to stay fit and healthy, and we are always keen to organise and host events that support this aim,” he said.

“Thanks to Doha College for choosing Aspire Zone once again as their preferred sporting destination, and we look forward to hosting future editions of the race”.

Winner of the 10km race Andrew Jones said he enjoyed winning the race for a second year.

“It was a great race again with great support from people. It’s a great set-up that Doha College has got and it’s great to win it again,” Mr Jones said.

Winner of the 5km race Nathan Riding praised the College for hosting a competitive event that promoted running.

“I just love this race; I have been doing it for the past three years and I just love the environment,” he said.