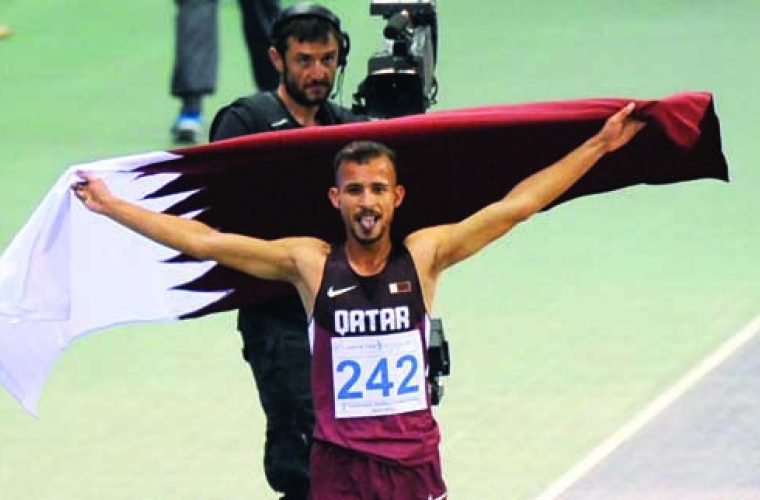 Al Garni was expected to get a tough fight from rival Marouane Habti of Bahrain in his title-defence in the men’s 1,500m final but it turned out to be a comfortable triumph for the Qatari who finished the race in 3:36.35sec, setting a new championship record.

He bettered the time set by another Qatari runner Kamal Ali Thamer at the same venue in 2008.

The 23-year could have finished the job early had he wait for the race to end, to celebrate his victory.

“Yes I got excited in front of the home crowd and started to celebrate before the finish line.... it was a rare occasion,” the pumped-up middle-distance runner said after sealing the medal.

“Definitely, it’s special to win a gold medal at home. This has given me a lot of confidence and I am looking forward to earn more laurels for Qatar,” he said.

“This is an Olympic year and Rio, definitely is my main target,” he added.

Haroun set a new championship record (45.88) in the men’s 400m on the way to winning the second gold medal of day for the hosts.

The young runner, who only last week set a new world record mark in 500m, was in impressive form and finished ahead of Bahrain’s Abubaker Abbas (46.60) and Kazakhstan’s Mikhail Litvin (46.80).

“I gave all I had gas left in the tank, but I certainly can go faster. My target here was to win the race, nothing more. For me, the next stop is Portland (World Indoor in March),” said the 19-year old.

“I’m working really hard this season ahead of the Olympics. I was unlucky to miss the Worlds last year and I wanted to finish what’s left undone. Breaking the 500m world record displayed my potential,” he added.

In the last contest of the day, Rashid Ahmed Al Manni (15.97) annexed another medal for the hosts, winning the bronze in men’s triple jump.

Earlier in the women’s 400m, Bahrain’s Oluwakemi Mujidat Adekoya was victorious as the runner blazed to first place with a new Asian and Championship record (51.67). The long-standing Asian mark was set by China’s Li Yajun way back in 1996.

The reigning Olympic champion, who jumped 14.32m to win gold, did not have to struggle too hard.

“I wasn’t at my best, but it’s still a good feeling to win. This being an Olympic year, I was looking at the Asian event as a preparatory event for it. I’m happy with the result,” said Rypakova.

After a gold medal in 1500m, the UAE’s Bethlem Desalegn claimed another 3,000m in convincing fashion.

“I needed to push hard, to meet qualification standards for Portland. I had suffered many setbacks over the last three years due to a problem with my achilles. I’m still not one hundred percent fit, but I’ll fight for a medal at the Worlds after finishing sixth in Sopot in 2014,” Desalegn said.

In other final, China’s Huang Bokai reigned supreme in men’s pole vault with a leap of 5.75m, a new championship record.

The organisers also announced the result of women’s pentathlon which was held on the opening day following protest by Iran.

Uzbekistan’s Ekaterina Voronina won the event with a score of 4,224 points. (Source)