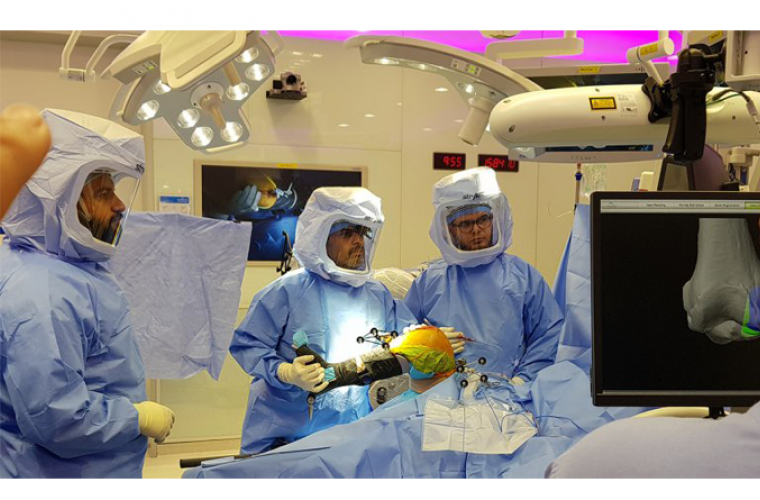 The Bone and Joint Center of Hamad Medical Corporation is the first in the Middle East and North Africa to use robotic-arm assisted technology in surgical operations as it has been performing this type of surgeries since March this year.

In a interview with Qatar News Agency (QNA), Head of Orthopedic Surgery Dr Mohamed bin Mubarak Al Ateeq Al Dosari said that Qatar is one of the few countries in the world to introduce this technology after the United States and a few European countries, as the Center began to perform these operations in knee replacement technique with an artificial joint, with a success rate of nearly 100 percent.

Dr Mohamed Al Ateeq is the only surgeon in the Middle East to perform this type of operation using robotic armaments. He was recently honored in the United States of America after being invited to attend a conference on arthroplasty. The Bone and Joint Center's robotic surgery programme was also granted certificate of appreciation in the conference and the program was considered one of the most successful programs in this field.

Dr Al Ateeq said that Robotic-Arm Assisted Technology is an example of how technology is transforming the way joint replacement surgeries are being performed. Surgery is performed by an orthopedic surgeon, who use the software to pre-plan your surgery. "We will guide the robotic arm to remove diseased bone and cartilage. Then the surgeon will insert the implant."

Dr Al Ateeq mentioned that knee replacement surgery, also known as total knee or partial knee arthroplasty, can be life-altering for many patients who suffer from osteoarthritis and other joint problems. This surgery can eliminate pain and restore mobility, allowing patients to resume an active lifestyle.

"Arthroplasty may either be performed in the conventional way, wherein the surgeon seats the implant manually, or with the assistance of a robotic arm controlled by the surgeon. Understanding the difference between these procedures can help you feel more at ease."

"We underwent 60 cases with less than 24 hours admission, immediate rehabilitation focused for fast recovery and less cost demands on the hospital. We implemented a well-structured physiotherapy program with pain relieving protocol as well as pre-operative and post-operative education for the patients."

The Head of Orthopedic Surgery added that HMC's infrastructure and the use of the best equipment and techniques have contributed significantly to bringing the technique of robotic surgery of artificial joints by using the technique of 'Mako' Robotic-Arm Assisted Technology along training the medical team of this project, pointing out that great results were achieved in the first operation done last March and that the number of operations are increasing day by day.

Dr Al Ateeq explained that the Bone and Joint Center has seen major developments in recent years and is no longer a traditional center. It uses the best techniques available in the world, supported by qualified and trained medical staff, he said, adding that this is evidenced by the admission of 7 doctors from the Center to continue training and specialization in the United States.